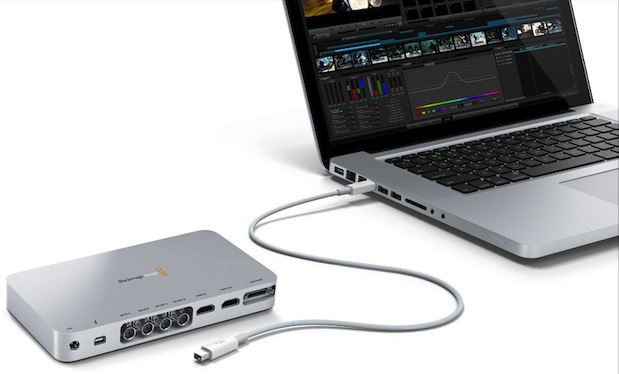 Blackmagic Design has begun shipping its first Thunderbolt based audio/video i/o interface, which is officially known as the UltraStudio 3D. As its suffix indicates, it is capable of 3D stereoscopic workflows, although it is certainly capable of 2D workflows too. However, we must be diligent and refer to it with its full name (including the “3D” suffix) in order to differentiate it from other Blackmagic models whose names also begin with “UltraStudio”. This first look at the US$995 UltraStudio 3D will cover its features, specs, and even an initial limitation for HP DreamColor monitors, together with a somewhat costly workaround. You’ll also learn everything you need to know about the UltraStudio 3D’s end-point Thunderbolt connection and its current limitations.

In that 3D mode, the two streams are recorded into two separate media files. Blackmagic explains that dual-stream 3D is higher quality because each eye is full resolution video, but dual-stream is less compatible with current editing software. To solve this problem, the included Media Express 3 software has been upgraded to handle both interleaved and dual stream 3D for capture and playback of 3D media. 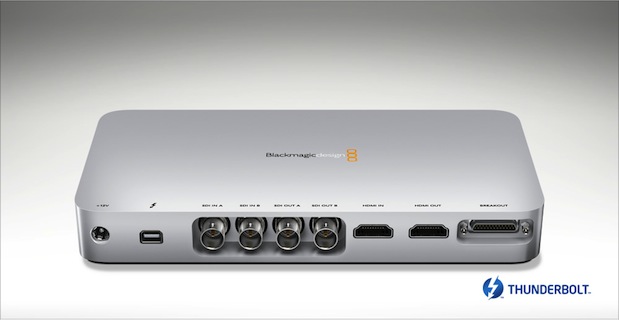 This type of power supply and interchangeable plug reminds me of one that I received many years ago when I used to use a Blackberry. I believe that this is the first time that Blackmagic is including plugs for different regions. All of the other Blackmagic products I have ever seen so far that require AC power (i.e. the ones that are not powered by a host computer, like the Multibridge Pro and the HDLink Pro) have come from the factory without any AC power cable, so that either the reseller or end-user would acquire one locally to match the type of electrical outlet used in that region.

UltraStudio 3D pricing, in general and for HP DreamColor users

The UltraStudio 3D is available now for US$995 from Blackmagic Design resellers worldwide. However, if you use (or plan to use) a DreamColor monitor from HP, currently you’ll need an additional device (HDLink Pro 3D DisplayPort, which is the upgraded version and name of the HDLink Pro DisplayPort which I covered in my 2009 article DreamColor converter boxes for non-compliant systems). This will mean an additional US$495 to be added to the US$995 (plus an electrical cable and an HD-SDI cable), at least until Blackmagic Design adds the digital RGB over HDMI. At NAB 2011 when the UltraStudio 3D was first announced, Blackmagic was considering the possibility of adding this feature via a future firmware update, and when I contacted their public relations department last week, this was still under investigation but not yet confirmed. If you use any other HD monitor, than you’ll be able to connect it directly via an HDMI or HD-SDI cable.