Blackmagic has clarified that its Video Assist firmware update includes Castilian & Mandarin, but no PsF removal or reverse telecine. What does this mean to you?

After its obscure press release at NAB last week, Blackmagic has now clarified that its Video Assist’s new updated firmware indeed includes Castilian & Mandarin (among 9 other languages), but does not currently include Cantonese, Catalán, Basque, Galician, PsF removal or reverse telecine. Blackmagic says that it will be adding more languages later. What does this situation mean to you? The first issue obviously depends upon your language needs or preferences. The second pair of issues depends upon whether your camera can output native pure progressive over HDMI or SDI at your desired framerate —or if not, whether you are willing and able to compensate for the pseudo-interlaced recording in post, via a workaround, or perhaps choose a competitive device from Átomos or Video Devices which can take care of this issue before recording. Ahead I’ll go into detail about all of that, and give you examples.

Even though Blackmagic was obscure about the languages included in its initial press release about its new firmware for Video Assist, it is now clear that the languages are:

Blackmagic also indicated that it would be adding even more languages, but didn’t indicate which ones or when.

No PsF removal or reverse telecine in Video Assist

Even though back in 2015, Blackmagic was looking into this issue, the company is apparently no longer doing so, since it confirmed no such capability of PsF removal or reverse telecine in Video Assist.

For those we are new to this topic or require a refresher, here is an executive summary:

As I have covered in several past articles, manufacturers like Átomos, NewTek and Video Devices (a brand of Sound Devices) have recognized this issue and have all added the function to reverse this undesired phenomenon caused sadly by many camera manufacturers. All three mentioned companies do this the correct way, without de-interlacing, since de-interlacing a disguised progressive signal degrades it unnecessarily. In most cases, it is necessary to indicate to the device —manually— that the particular source is PsF or telecine.

To be clear, the absolute best scenario is have the camera output pure progressive directly via HDMI or SDI. The second best way is to have the device (i.e. from Átomos, NewTek or Video Devices) properly perform reverse telecine or convert PsF into progressive before recording. The third and last solution is to follow the instructions in my PsF missing workflow series, which up until now include 10 parts.

If you are going to record 4K UHD

If you are recording 4K UHD using the new Video Assist 4K model, you have nothing to worry, since 4K over HDMI is always progressive, so there is no issue to record progressive in this case. (The Video Assist 4K only offers 4K UHD, and does not offer Cinema 4K.)

If you are going to record 720p

If you are lucky enough to have one of the few cameras that can deliver pure progressive over HDMI at your desired framerate, then you may certainly consider a Video Assist from Blackmagic. However, if your camera is incapable of outputting pure progressive at your desired framerate, you might consider purchasing one of the similar products from Átomos or Video Devices (a brand of Sound Devices) to avoid the hassle and/or possible human error of the workarounds in post. I am truly surprised that Blackmagic has chosen to ignore this known issue and feature, while its primary competition has addressed and solved it.

Frequent readers know that I have been covering —and taming— camera shyness for several years, and that I have...

For many years, I have been documenting the existence of “shy” 1080p cameras, i.e. those incapable of outputting a... 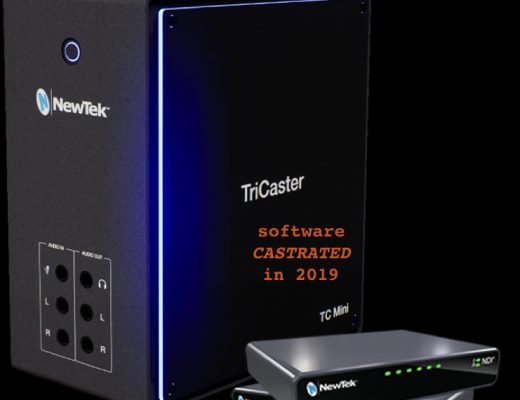 In November 2019, I applauded NewTek for streamlining the hardware in the new TriCaster Mini (2019), in an act...