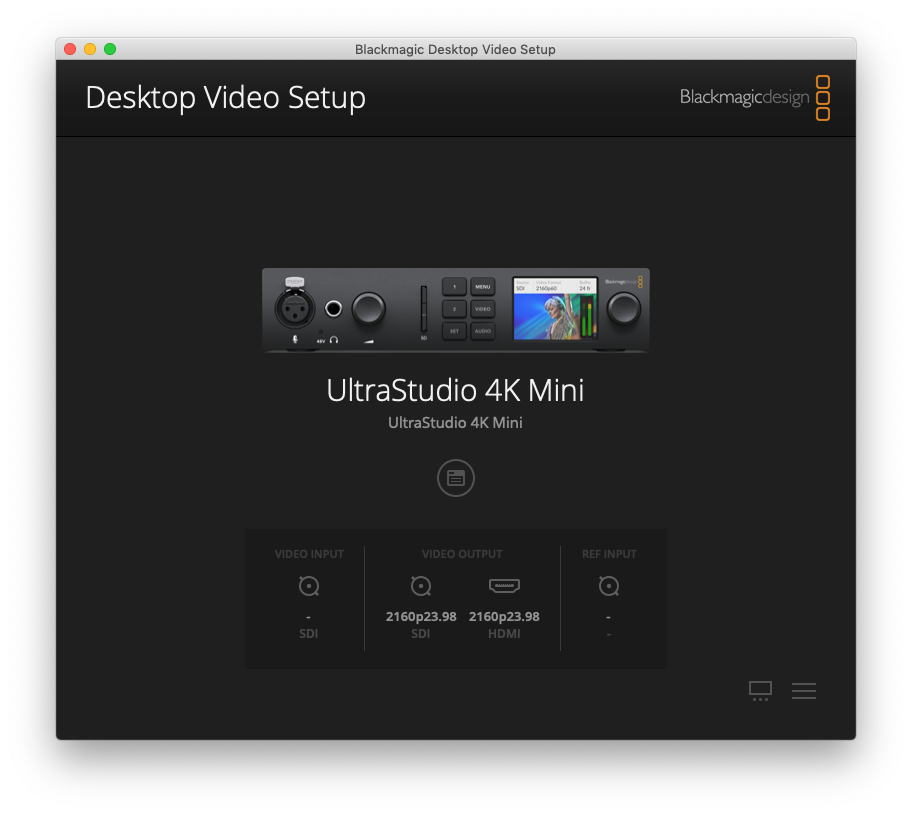 I have been patiently waiting for an affordable Thunderbolt 3 device that could handle the wide range of needs I require for I/O in production and post. Previously, I used the combination of BMD’s UltraStudio Mini Recorder and the UltraStudio Mini Monitor to handle the acquisition and playback in the world of SDI and HDMI connectivity onset, but I was always forced to connect them at the end of my Thunderbolt device chain was more than a bit awkward when working onset. That’s why when the UltraStudio 4K Mini was first announced, I reached out to my friends at Blackmagic Design to get a closer look. What I received was not what I thought I was looking for, but ended up being way, way more. With the release of the UltraStudio 4K Mini, Blackmagic has reaffirmed itself as the leader in production and post-production I/O.

Small enough to fit on a DIT cart onset, yet more than powerful enough to handle the growing demands for 4K and HDR deliverables in post, it’s going to work regardless of which tools you choose. Whether conforming deliverables for SD, working in mainstream 1080 for broadcast, or finishing a project in 4K Rec2020 PQ as required for HDR deliverables, the UltraStudio 4K Mini performed beyond all my expectations.

At roughly 8” x 7” x 2”, it’s technically only ‘mini” as compared to the full-size UltraStudio. The compact form allows for the acquisition of analog video as component, while digital signals come in via 12G SDI or HDMI 2.0. Support for up to 16 channels of embedded audio, the 4K Mini includes 2 channels of analog audio in and out, via standard ¼ phono jacks, while the unit includes an SD Card reader, 1/4’ headphone jack with volume control, a confidence monitor/control panel in addition to the 3pin XLR microphone input on the front with optional 48v phantom power, simplifying the setup in editing when need arises for capturing audio, recording a voice-over, or adding narration.

While there are more than 40 compatible software applications that work with the UltraStudio 4K Mini, I was only able to test a small few. I was determined to see how it faired not only between applications but also how it compared between existing Mac and Windows workflows in DaVinci Resolve, Adobe Premiere and After Effects. To be inclusive, I added Apple’s FCPX, Pomfort’s LiveGrade Studio, Assimilate’s Scratch and GrassValley’s Edius to give me a comprehensive look at the capabilities and see if there were any platform-specific issues.

Excluding the physical differences in setup and configuring acquisition and playback within each of those apps, the performance of the 4K Mini never faltered during playback. I also wanted to make sure that a wide variety of media playback was tested. My existing production timelines are built around files from the Arri Alexa in ProRes4444 and .ari files and Sony Venice’s XOCN codecs, ProRes from a digital recorder, H.264 and H.256(HEVC) from DSLRs and included some native Phantom, RED and Cinema DNG content as good measure.

Since the UltraStudio 4K Mini does not offer additional video processing, my main 15” Thunderbolt 3 laptops, a MacBookPro and Dell Precision, each with 16G RAM and a 1TB SSD, would be working to their limits. While the MacBook has 4 TB3 ports on 2 independent Thunderbolt busses, the Dell has only a single TB3 port, giving me concerns regarding available bandwidth and a possible data bottleneck. I was mainly testing with 2 Thunderbolt 3 enabled laptops, so I expected that a similarly configured desktop or an all-in-one computer setup would offer better performance and results.

Being a Blackmagic product, of course, the setup and configuration of Resolve and Fusion were as seamless as expected, as was the setup in FCPX, Scratch and Edius. Configuration of the Adobe Suite requires users to access multiple preferences in each application to achieve optimum functionality. However, once properly configured, everything operated as expected.

Performance is always a function of the material you edit with, but Apple’s ProRes codec offered the widest range of useage on either platform and because of the way Apple handles HEVC codecs. Any H.265 encoded content played without issue in Windows, but stuttered horribly prior to timeline rendering on the Mac side. Those are computer specific problems that are only reflected in how each NLE handles output, not in the functionality of UltraStudio 4K Mini. Once configured, the 4K Mini functioned seamlessly. Additionally, I was changing aspect ratio’s and frame rates from project to project without faltering.

I tested each configuration with normal production editing sessions of 4-6 hrs to see of there were any thermal issues related to some active TB3 cables. Cables will make or break your Thunderbolt3 workflow and not all cables are alike. Active Thunderbolt 3 cables carry the highest amount of data and video and are marked with both a “3” and the “lighting bolt” logos on the boot (the sleeve around the USB-C plug). The maximum length of most active cables is being limited to about 1.5m. I also tested the UltraStudio 4K Mini with 2 pre-release versions of Corning’s Optical Thunderbolt3 cables, one 5m (15ft) and one 10m (33ft) cable. The optical cables out-performed the shorter active TB3 cables in every way I tested them. It even helped me figure out that a playback issue I was having with Premiere on the Mac, as a brand new, fresh out of the box, active cable that was purchased for this test had an electrical issue that was disrupting playback.

With any Thunderbolt workflow, pro users will need to be careful of throughput issues on computer systems that only have a single Thunderbolt 3 buss like the Dell used in my tests. The UltraStudio 4K Mini is designed to be situated at the end of the TB3 device chain to limit any issues in playback performance. While data is handled discreetly from the display signal within the Thunderbolt protocols, you can get throughput benefits by having your I/O device as the last device (farthest from the computer) in most configurations. That configuration allows faster communication between both CPU and GPU processing and the read-write access needed for your storage, while the video output is handled its own dedicated pathway (via display port) to the device.

On computers with multiple Thunderbolt 3 busses, as the MacBookPro, I suggest that you alway make sure that you handle data tasks on one buss channel and connect your display devices such as an external monitor or the UltraStudio 4K Mini on the other.

My only issues with the UltraStudio 4K Mini are minor. It ships without a AC cord or a Thunderbolt 3 cable, and that could be problematic for some entry level users that think any USB-C cable will work for Thunderbolt 3. More notably though, as of October 1, 2019, BMD’s online list of Windows compatible Thunderbolt 3 systems hasn’t been updated since Jan 2018, only listing 3 Dell Laptops and a dozen or so desktop models that had the latest Intel TB3 chipsets in them at that time. I proved in my testing that virtually any Thunderbolt 3 compatible computer systems will work with the UltraStudio 4K Mini, but there might be some caveats in performance based on the CPU, GPU and I/O capabilities of each PC. Laptops and All-in-One’s with Thunderbolt 3 built 2017 and later should be able to use the UltraStudio 4K Mini without incident as long as your drives can maintain the data needed for your editing style.

The positives for the UltraStudio 4K Mini far outweigh my complaints, handling everything from SD to DCI 4K 60p (4096×2160) as HDR, with the ability to edit in YUV or RGB and output up to 12bits data to your screen. You can ingest directly from an SD card, capture analog audio and video, add dialogue or narration to your project or use it for playback of Stereoscopic 3D content for features or for Virtual Reality post production.

With a MSRP of $999.00 (USD) UltraStudio 4K Mini brings a new level of I/O to the users in media and entertainment. It is solidly built for the demands of production onset while amazingly functional for all but the most specialized needs in post. The 4K Mini opens a new level of capabilities for mobile productions, post facilities and streaming, regardless of the OS or applications you work in. I see the UltraStudio 4K Mini replacing a large number of existing I/O systems as people upgrade their current systems with laptops and all-in-one computers as the miniaturization of production hardware continues.