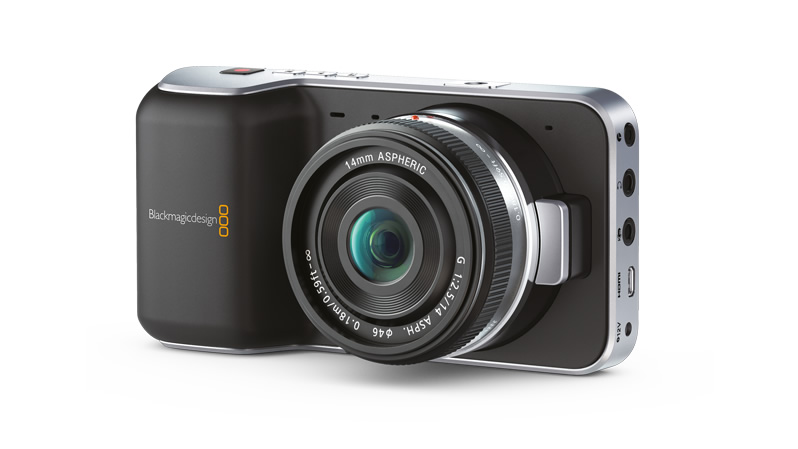 The Blackmagic Pocket Cinema Camera uses the open standard lossless compressed version of CinemaDNG RAW. CinemaDNG RAW lossless compression works in a similar way as a ZIP file where the RAW files are compressed during recording without the loss of any part of the image, so all images retain the same quality when they are decompressed. That means customers get back the mathematically perfect high quality RAW file image that they recorded.

High quality lossless CinemaDNG files are fully compatible with DaVinci Resolve 10 for seamless color grading and editing workflows. Lossless CinemaDNG RAW files are an open standard however not all video applications can open them, although those that can are increasing all the time. Customers can download the free DaVinci Resolve Lite and transcode to popular editing formats like ProRes andDNxHD for compatibility and round tripping with editing software like Final Cut Pro 7®, Final Cut Pro X®, Avid® Media Composer® and Adobe Premier Pro®.

With this new Blackmagic Camera 1.5 update, the Blackmagic Pocket Cinema Camera gives customers the choice of recording CinemaDNG RAW or high quality ProRes 422 (HQ) in video or film mode. Cinematographers can simply remove the SD card from the camera, insert it into a laptop or computer, open the file and immediately start editing or color correcting media in any location! Working directly from the SD card eliminates the time wasted copying files and dramatically speeds up post production workflows.

“Adding CinemaDNG RAW recording to the Blackmagic Pocket Cinema Camera is incredible,” said Grant Petty, CEO, Blackmagic Design. “It's amazing that we are now able to record the highest quality RAW images on such small SD cards! We think customers are really going to enjoy the extended creative flexibility that color grading wide dynamic range RAW files will bring to their productions!”

The Blackmagic Pocket Cinema Camera features an industry standard Super 16 sensor size, so it’s perfect when using Super 16 cine lenses via MFT adapters, as the shooting experience is the same as using the same lens on a Super 16 film camera. The 13 stops of dynamic range look of the Blackmagic Pocket Cinema Camera is almost identical to shooting on a professional Super 16 film camera. The Micro Four Thirds lenses offer a wide range of low cost lenses with amazing image quality, and they are compatible with mount adapters such as PL mounts for large lens and professional motion picture film rigs.

One of the most important features of the Blackmagic Pocket Cinema Camera is its super wide dynamic range of 13 stops, allowing feature film quality images. A common mistake in the television industry is the assumption that more resolution means higher quality. Most cameras, even ones with higher than HD resolution, can produce “video” looking images that suffer from highlight and black clipping that limits details. Blackmagic Pocket Cinema Camera's wide dynamic range eliminates this problem and provides film quality with dramatically more detail retained in black and whites in the image. Once the shoot is complete, DaVinci Resolve Lite color correction software can be used to adjust images and take advantage of this extra range in the images.

Blackmagic Pocket Cinema Camera has been designed as the perfect companion to editing software such as Final Cut Pro X and Avid Media Composer. Unlike other cameras, which require the use of custom video file formats, the Blackmagic Pocket Cinema Camera includes absolutely no custom video file formats, and every file type included is open standard.