ProVideo Coalition is working with Studio Systems to bring our worldwide audience exclusive content. Studio Systems, the only dedicated publication serving the booming markets for broadcast, post production and animation technology in India, is today considered the information facilitator and knowledge catalyst by its readers.

The article below is featured here with their permission. 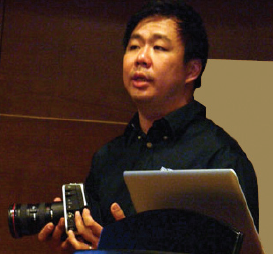 Blackmagic has grown rapidly to become one of the world’s leading innovators and manufacturers of creative video technology. Blackmagic Design’s founders have had a long history in post-production editing and engineering. With extensive experiences in high-end telecine, film and post, harnessed with a real passion for perfection, Blackmagic by entering the field of acquisition has set out to change the industry forever. Richard Lim. Director, Blackmagic Design Asia speaks about Blackmagic Design Production Camera 4K.

Studio Systems: Blackmagic Production Camera 4K has generated a lot of buzz at the recently concluded NAB Show. What is so unique about this camera?

Richard: We are really pleased to be able to bring to the market a revolutionary and unique camera in the Blackmagic Design Production Camera 4K. We think that with this Camera, we can empower the 4K environment in terms of content production and creativity. Features such as RAW formats, compatibility with standard issue SSD recording and global shutter, coupled with the price tag, we believed that many will adopt our camera and go out there and shoot some fantastic images.

SS: What are the major technical features of Blackmagic Production Camera 4K?

With the EF compatible lens mount you can choose high quality optics from the likes of Zeiss and Canon that are deisnged to take advantage of the large Super 35 size sensor with minimal cropping. The EF compatible lens mount means you're not locked into a specific lens, so you have the freedom to work with professional cinema lenses using rails, follow focus and other professional accessories.

The Super 35 sensor features a global shutter so you get perfect panning with minimal crop factor. It also means that you can achieve some beautifully wide angle shots from your wide angle lenses. If you're working in HD you'll love the freedom to reframe and zoom into shots without any resolution loss, and when down scaling from 4K to HD you get incredibly smooth and clean images.

With 12 stops of dynamic range you get amazing looking images beyond those of regular video cameras or even the highest end broadcast camera. All this dynamic range is captured into ProRes or CinemaDNG files at 4K resolution, so images retain a beautiful look film look. By capturing more detail from the sensor you can make creative decisions during DaVinci Resolve color grading. You can really push the shadows or highlights in either direction and preserve fine details in the image.

With a built in SSD recorder, the Blackmagic Production Camera 4K easily captures 4K in ProRes 422 (HQ) and compressed CinemaDNG files. You get a 4K camera designed from the ground up to be part of your post production workflow. Capturing a removable SSD means that once you've finished shooting you can simply connect the SSD to your computer and edit or color correct your shots straight from the disk. Disks can be formatted in either HFS+ or exFAT for Mac and Windows compatibility.

The latest high-end televisions and video projectors support Ultra HD, which is four times the resolution of 1080 HD. The Blackmagic Production Camera 4K creates visually lossless compressed CinemaDNG RAW and ProRes 422 (HQ) files that are perfect for editing and grading with the software tools you already own.

SS: Though 4K is gaining acceptance globally, Indian film production industry is not gung-ho about the 4K roll out. What are your thoughts?

Richard: We believe that working in Ultra HD will gain momentum over time, much in the same way HD has. All of the technology required will involve costs and this will certainly take both time and effort. That is why the 6G SDI standard is ideal. The ability to deliver an Ultra HD signal over a single cable, that is also backwards compatible with SD and HD signals, means that users can lay the foundations now for an Ultra HD future, while still maximizing their investment in pre-exisiting SD and HD infrastructure.

With the new range of Ultra HD products that Blackmagic Design have rolled out during NAB, these are high quality yet well priced items and we hope we can help quicken the adoption of Ultra HD development in India. We will be hosting a series of roadshows during the course of 2013 spanning ten cities, and also participating in this year's Broadcast India, showcasing our complete Ultra HD workflow flow.

SS: Many expected Blackmagic to announce a 4K camera, and the Pocket Cinema Camera came as a surprise. Can you take us through the design evolution here and how HD fits in to your product range?

Richard: Our guiding ethos has always been about empowering our customers to be more creative. And HD is still very much applicable to many if not all broadcasters, especially here in Asia where most have still yet to make the transition from SD to full HD content.

While it isn't possible to make a small camera big, it is possible to make a big camera small. That is something our CEO, Grant Petty, said during his press conference at NAB. And that is exactly what we have done with the Pocket Cinema Camera. Taking everything that we had learnt while manufacturing the Blackmagic Cinema Camera, we have been able to create a device that is even smaller, and yet still retains all of the quality that our users have come to expect from the Cinema Camera including the 13 stops of dynamic range.

There are a couple of differences worth highlighting. Recording formats include a compressed version of CinemaDNG called visually lossless and data captured an SD card rather than SSD. It has a Super 16mm sensor and the screen on the rear of the camera is not a touch screen.

Richard: As you say India's broadcast and post production markets are currently amidst a rapid program of change, transitioning from SD to HD workflows and Blackmagic Design feels that we have a major part to play in this transformation. Blackmagic Products are designed to fit into the most effective workflow and offer users the best possible quality at an affordable price point. It will be applicable to any market that values quality products. We should be able to provide some impetus for HD adopters in this country.

Richard: We at Blackmagic Design felt that this was a very natural proggression for us. Our experience in the postproduction and broadcast industries means that we understand image quality better than most. We have grown from offering Post Production solutions to encompassing Broadcast, and now, Production. What we have tried to provide is an open ecosystem of products, with no proprietary codecs or standards thar will offer the best quality possible and allow the industry to be more creative in an effective way.

Reprinted on PVC with permission from…