From the perspective of a shooter who has to hand off footage quickly.

I do not care how the Blackmagic Design eGPU looks. I do not care how it works. I only care if it speeds up my exports. As a shooter I sometimes find myself in a hotel room offloading footage for a client and prepping my gear for the next morning’s call time. Shoot and charge batteries and sleep that can be the cameraman’s life at times. The last thing I want to do is to stay up late because I decided to take the extra step to sweeten my URSA Mini Pro footage via DaVinci Resolve for the client. I want that process to go about as quickly as it can without compromising too much. Overnight renders? I’m not wholly comfortable with those while I travel for work.

Here I take a hard look at the new Blackmagic Design eGPU. I look at the eGPU through a traveling cameraman’s lens. If you want more a scientific detailed overview then jump to my colleague’s recent review of Blackmagic Design’s eGPU which you can find here. When it comes to offloading and computers I am no scientist. I reserve that roll for my shooting and lighting.

Let’s dive in. First, I don’t care how the Blackmagic Design eGPU looks. I looks great for those who buy products for those items to sit on their desk. For me, the eGPU will likely park itself into a pelican case so it is ready to go when and where I have to shoot. The other times it will sit behind by monitor. The only thing I find a little bit frustrating is the short Thunderbolt 3 cable that comes with the eGPU. This, from my limited understanding, is to keep the 40 Gbps moving at full-tilt. This is not a huge problem just know you are not going to be able to hide the Blackmagic Design eGPU under a desk or too far from your computer. If you have a small work space this might be an issue and for me it was just a small inconvenience.

Just how much space on your desk will the eGPU take? A little less than seven inches for the width and length. That’s not a ton of space and a little bit more than double the size of some external hard drives. For those traveling camera operators or DPs who want to take a client’s footage through Blackmagic Design’s DaVinci Resolve before handing off the eGPU is a decent size for a hard travel case. I am planning on building a travel case which will could hold both the Blackmagic Design eGPU and Micro Color Panel. 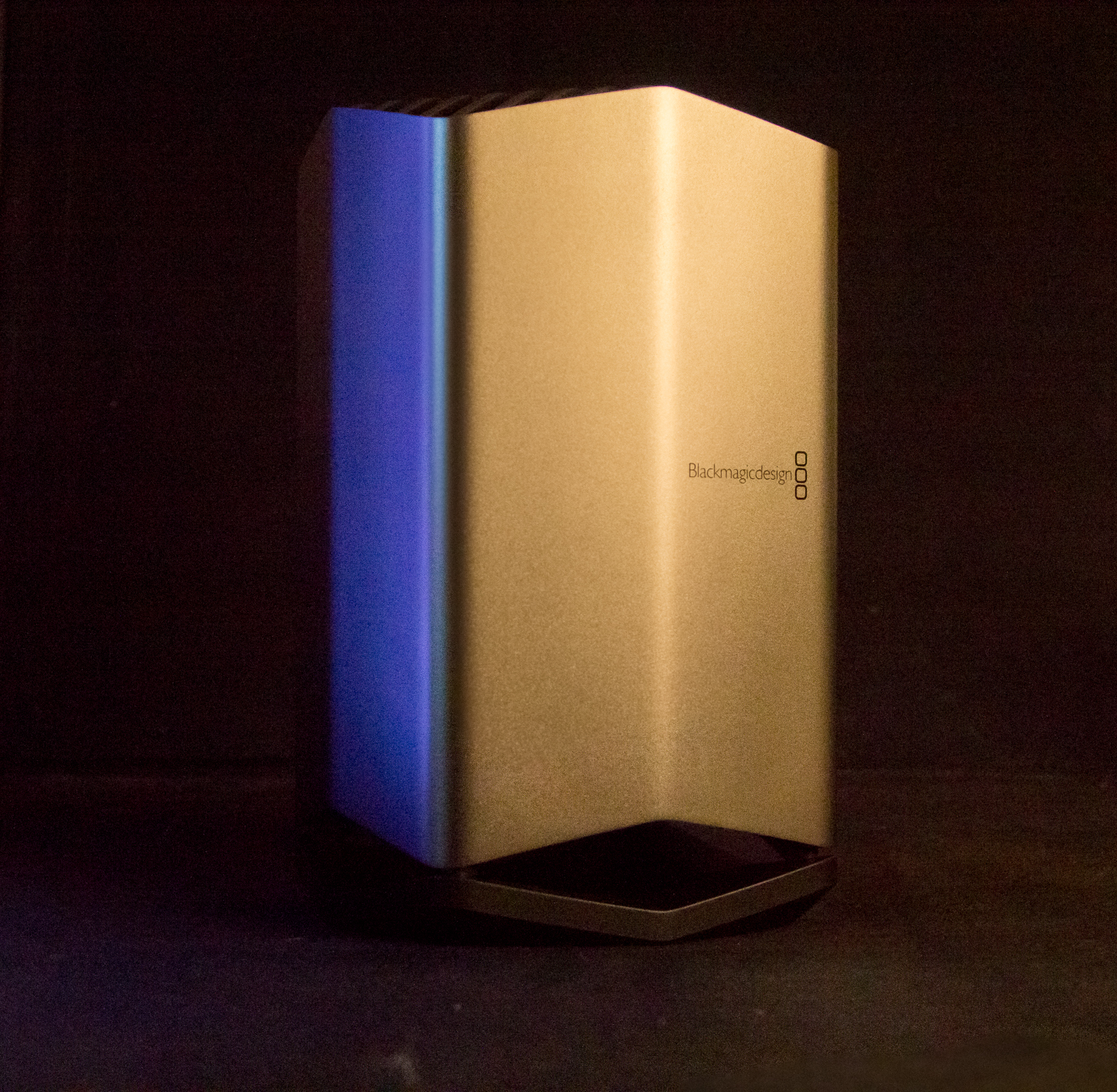 But is the Blackmagic eGPU worth the investment? Will it even work on your computer? These are good questions to ask before taking the $699 plunge for the eGPU. The Blackmagic eGPU works only on Apple computers. Sorry for those who use other computers than Apple, but this computer accessory is only for Mac. So much so you can only buy it on the Apple.com store. Yet, not just every Mac. If you’re like me, who is writing this post on his newly repaired 2010 MacBook Pro, then the Blackmagic eGPU will not work. You will need a 2016 or newer Mac for the power of the eGPU to be harnessed.

So, how did I test the eGPU? I borrowed a buddy’s computer. My friend Alex bought a brand new MacBook Pro with 2 GB of GPU not too long ago. I loaded his Mac with DaVinci Resolve, plugged in the eGPU, and took it through test to see if the 8GB of eGPU power is worth it. Short answer is yes. Long answer is… longer. 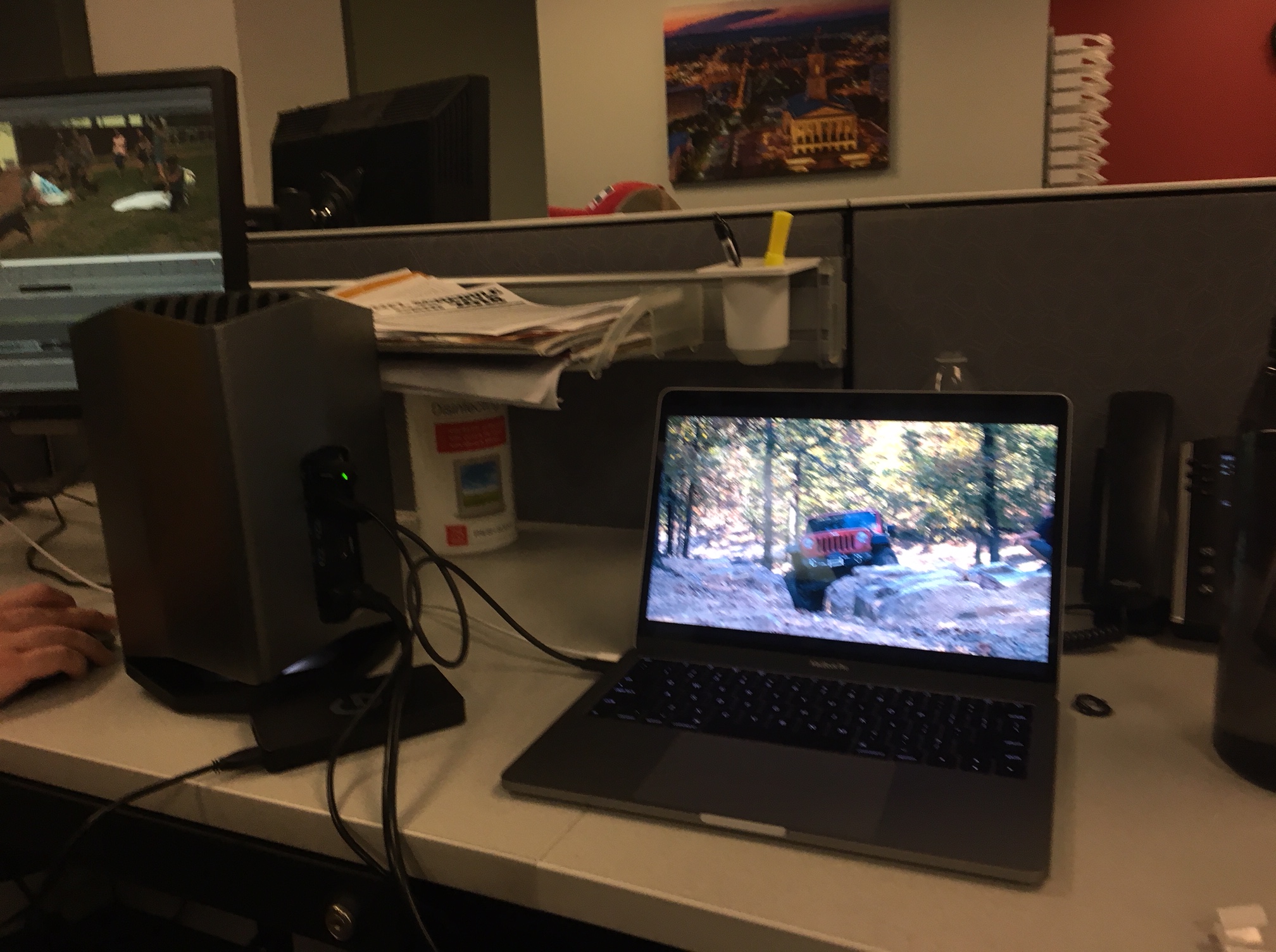 Now, this is not a scientific test, yet I immediately felt the eGPU processed the 4K ProRes footage well and quickly. I did color passes and the eGPU was exporting the footage faster than real-time. I added spatial noise reduction and again the Blackmagic Design eGPU took that footage like a boss and exported it faster than real-time. Next I went full in on computer choking effects like Blur and Mist found in Resolve. These mixed with a Temporal and Spatial noise reduction can really slow down a lesser computer. It was here where the 8GB of eGPU power had maxxed out. The render of the 4K Blurred, Misted, and Noise Reduced footage slowed to less than real-time and was closer to a 1/4 of a real-time export. Of course, the video looked like a watercolor painting with all of this blurring, misting, and NR applied. Rarely would I need this many effects when exporting video for broadcasting producers. If I did, I’m likely in panic mode because I screwed something up.