It’s Not the Size that Counts 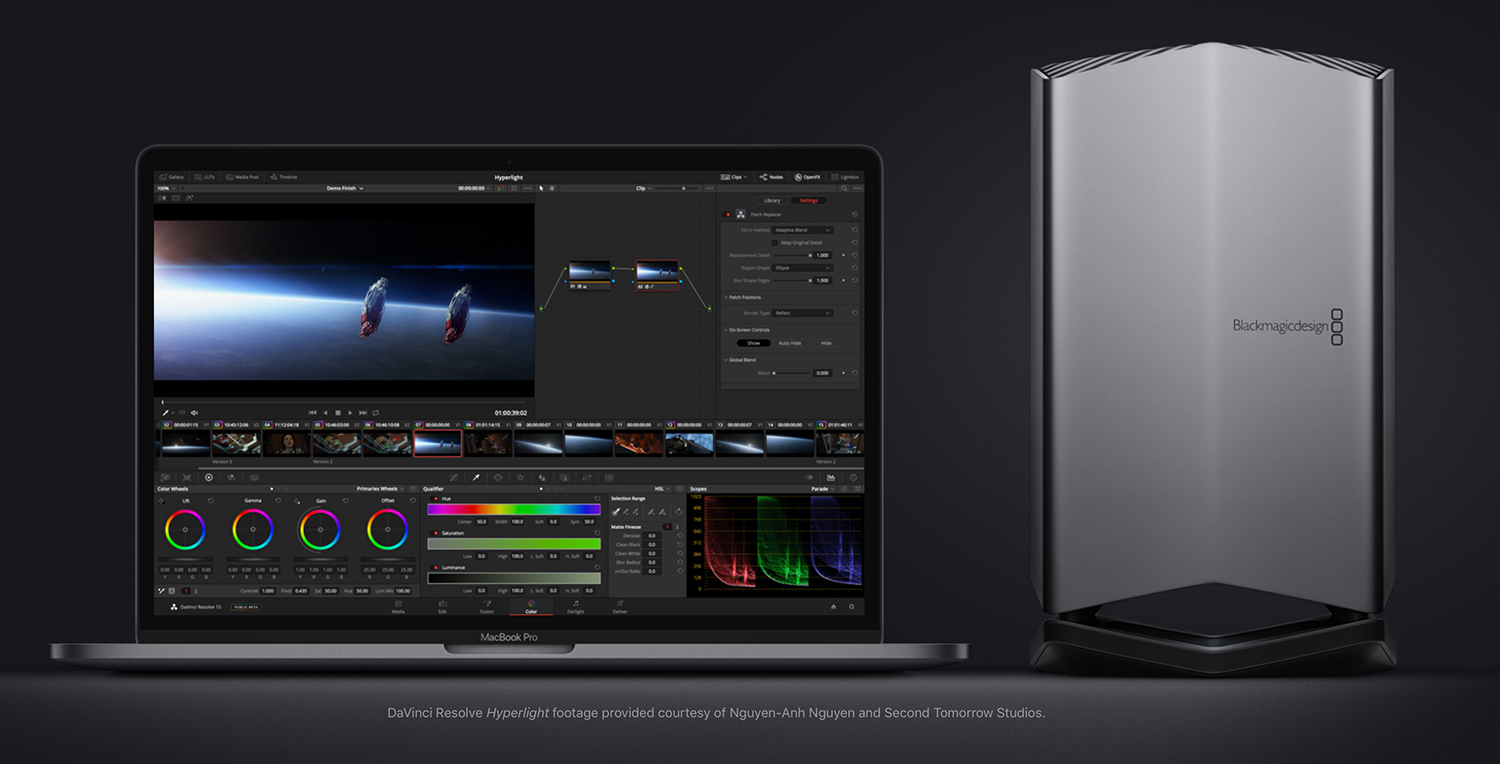 When Blackmagic Design’s newly released eGPU landed at my office for review, I did something I don’t get to do very often with tech gear. I spent a couple of hours admiring the overall design and build quality while my laptop finished some renders. With the style and feel that Apple imparts on products under its influence, and possessing enough physical mass in the one piece, extruded design, to give the unit presence while increasing the cooling capabilities. However, my initial reaction was all about what it felt like in my hand and how it looked.

I have intentionally not included any actual render times for the files processed, they’re irrelevant to the article.

Over simplified user manuals for new products bother me immensely. The Blackmagic eGPU’s manual is included, albeit with only 3 instructions, 1) plug in the AC power, 2) Connect the included TB3 cable, 3) Connect to your computer. There is nothing printed about the device in any of the 10 languages in the manual. There is no software to load, no systemwide configurations to manage,  nothing more than an icon in the Menu to indicate that the eGPU active. Having fought configurations to the point of madness in my previous efforts to make any 3rd party eGPU work via MacOS, I was concerned.

Until the High Sierra release, Apple’s MacOS intentionally limited users from accessing or utilizing any external graphics processing via Thunderbolt, sadly restricting one of the protocols greatest benefits for mobile computing. Now, in the 10.13.x and later versions of the system software, Apple now supports 8 lanes of external PCIe processing, increasing the rendering capacity for laptops and all-in-one configs like the iMacPro while doubling the graphics capabilities of my laptop. (The Blackmagic eGPU is not currently supported on Windows-based computer systems)

It’s Not the Size that Counts

The Blackmagic Design eGPU comes preconfigured with an 8GB of GDDR5 Ram on AMD’s Radeon Pro 580 card, with 256-bit memory bandwidth able to handle up to 5.5 teraflops of processing power internally. This eGPU delivers a full 85W of charging power over the TB3 cable so you can leave Apple’s charger in your backpack, it is not needed here. I/O  is configured on the unit with 4-USB 3.1 ports (Type A), 2-Thunderbolt 3 (USBc) ports and one full-size HDMI v2.0.

Configuration of the system, displays and media storage was handled a couple of different ways during the testing, as changing a system’s base configuration can often be used to point out processing bottlenecks and other workflow inefficiencies. Traditionally in my setups, I use one buss for my displays, IP connectivity and USB devices while the other buss is just for media storage, that separation allowing for the highest throughput without having to sacrifice bandwidth, while maintaining 10bit HDR computable color via Display Port over the Thunderbolt 3 cable.

The tests were edited and rendered in DaVinci Resolve v15 Public Beta with these 4 hardware configurations:

To make sure the 50-125GBs of data created during each successive render pass would not affect the processing or slow down renders, I configured my existing Thunderbolt3 storage to allow the media, cache and renders to be handled on separate, physical volumes to achieve maximum throughput. Media was stored on a 96TB LaCie 12big (r/w @ 1.25 GB/s in Raid 5), all cache was handled on a 2TB LaCie BoltSSD (r/w @ 2.75 GB/s in Raid 0) and outputs were written to a 64TB LaCie 6big (r/w @ 1.85 GB/s in Raid 0).

Working out the mechanics of the hardware was relatively easy compared to deciding on which cameras and codecs to focus on. Knowing that whatever I chose would never be good enough for the internet, I went with the camera codecs I have been working with for the last couple of months, ones which offered me a level of comfortability due to that familiarity, making my choices:

To keep the renders manageable, 1-minute timelines for each codec were created with the intent to punish the eGPU. Key-framed color corrections, tracked power windows, varying levels of blur and sharpen, variable noise reduction, extreme grain removal and moving displacement maps, also making sure to apply the proper base grade for each camera, while copying node info independently. Utilizing the capability in Resolve that allowed me to apply the same stress to each of the different codecs.

Output renders were based on my typical delivery requirements, selecting 1080 and UHD versions in H.264 for YouTube, UHD Masters in ProRes 422HQ and 444XQ and a full raster output from each camera as H.264 and ProRes444XQ giving me finished renders that ranged in size from 11MB to nearly 22GB for each video file and a roughly 72GB folder for each of the Open EXR deliverables in UHD.

While there is no configuration capability when you plug the eGPU in, DaVinci’s Resolve Studio version does allow the user to modify the GPU processing configurations between Apple’s Metal, industry standard OpenCL or Nvidia’s CUDA processing. The default “auto” selection here is Metal, and I am going to recommend to all users to allow the OS to choose the proper configuration for your setup, it will save time and frustration.  Forcing my computer to use OpenCL for test rendering caused a significant number of performance issues and severely affected my system’s overall stability. I was not able to force the Blackmagic eGPU into use by other applications like FinalCutProX or Premiere Pro or AfterEffects.  I did not really expect Premiere to work yet. However, I was surprised at the lack of performance gains in FCPX and Motion, especially with the recent announcements and updates.

Secondly, existing Thunderbolt 2 users are going to be sadly disappointed, it appears they have been left out of configuration options completely. Even with the Mojave Beta, my TB2 laptop only saw the Blackmagic eGPU on the buss as a USB hub. While it did give me the default “GPU disconnected”  MacOS warning despite not being seen at all as TB device in the system profiler.  While there’s a CMD Line hack to allow 3rd party eGPU’s to run on TB2 systems, my limited time with this review unit kept me from testing those options. Admittedly, with only 4 lanes of PCIe performance externally under the older architecture, it would be a struggle for most users to see anything more than minimal gain over the older TB2 connection.

Power to the people

Chewing through the computationally complex renders of various frame sizes, production files and final outputs an a manner usually seen on desktop computers, the BlackMagic eGPU reduced render times across the board by a minimum of 25-35% on every file I processed.

The camera codecs having more impact on the actual processing times than the type output being rendered. Yet some processes, like churning out 1080 H.264 files dailies from an AlexaST, rendered faster than realtime with the eGPU attached.  One interesting revelation was that the processing times for each individual file output from one camera were all handled in virtually the same amount of time, so it took just as much time to deliver an 11MB H.264 file as it did to output a 23GB ProRes 4444XQ version.

The time it took to output each production file varied less than 10% overall, despite the ProResXQ version of the file being more than 150X larger in volume than the 11 MB H.264 version. That speed and performance were mirrored for every camera codec and every formatted output I tested on my system.

The tests were run more than a dozen times in each hardware configuration. Renders were setup with all the file versions from one camera at a time, then rendered alternating camera timelines to make sure the eGPU was being stressed fully.  Each baseline and test was done with and without the BlackMagic eGPU in each of the 4 hardware configurations. The astounding find for me was something really simple, yet contrary to my perception.

My fastest render times came when the Blackmagic eGPU was siloed on one Thunderbolt3 buss and the storage and monitoring were on the other. It was suggested by more than one person that, in theory, it should have been more efficient to have the 4K display attached directly to the eGPU, but that was not what I found on my computer.

(Your experience may differ)

Changing the hardware configurations had considerably more effect on processing and render times than choosing multiple codecs for your deliverables. Traditionally, I run my laptop in a closed configuration, connected via TB3 to an Asus PA32UC HDR monitor. I found that anytime I ran the tests with the laptop screen open and active, render times increased dramatically. On my setup nothing sucking the life out of the testing faster running my test machine with the display on and at full brightness. My tests were all done on an earlier version of the technology. I am going to go out on a limb here and say the 2018 MBPro or the latest iMacPro should show quantitatively better performance in Resolve with the Blackmagic eGPU, mainly due to the updated architecture and capabilities, with the greatest gains in performance coming on the most current hardware releases.

I have intentionally not included any actual render times for the files processed, they’re irrelevant to the article. The projects were designed in Resolve to highlight how the Blackmagic eGPU could benefit a user across their all of their workflows, not just on how much faster grain reduction rendered compared to color correction. While I never had any performance gains reach out and slap me, what I did find was a silent workhorse, consistently hammering data to reduce the amount of time I spend rendering and I will gladly take 25% of my day back

Finally, we can envision a time where mobility is no longer a limiting your capabilities or creativity, as we are reaching a time when accessing advanced processing and virtualized rendering power is little more than a cable on my desk.

Blackmagic’s eGPU is as simple in design as it is elegant on your desk, but do not be deceived, this is the corner stone for an evolutionary advance in mobile computing. The Blackmagic eGPU reinvigorated my 2-year-old laptop with a 25-30% increase in response in Resolve and shows even greater gains with the newly released hardware configurations. So whether you are onset outputting H.264 dailies, cutting a doc, or color correcting a feature film, the Blackmagic eGPU is but the first in a series of externally available, easy to use devices that will expand our creativity while keeping us free to creatively do more.