The free VR app Bigscreen, that lets you watch movies using a VR headset, enters February with its own way to celebrate Black History Month, with a selection of films called Black Cinema. 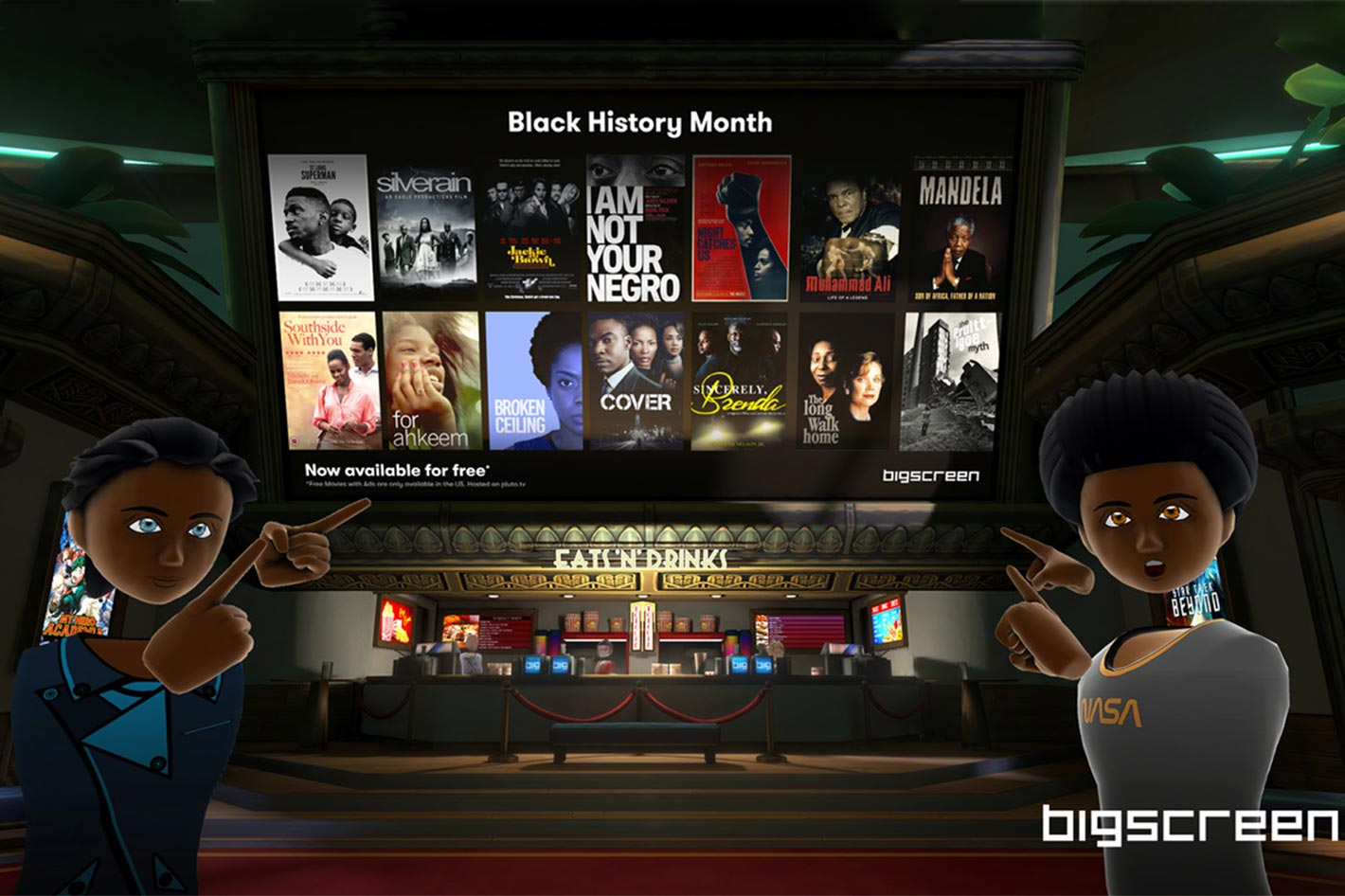 Black History Month is an annual observance originating in the United States, where it is also known as African-American History Month, which commemorates the accomplishments of African Americans in every area of endeavor throughout history. It has received official recognition from governments in the United States and Canada, and more recently has is also observed in Ireland, the Netherlands, and the United Kingdom.

Bigscreen continues to expand its offer to those who want to watch movies using a VR headset, and this February the company behind the app added a new Bigscreen Movie category called Black Cinema with titles such as Night Catches Us, The Long Walk Home, St. Louis Superman, The Pruitt-Igoe Myth. A total of 14 free movies are available to commemorate Black History Month. The free movies are ad-supported on Pluto.tv, and can be watched on-demand at any time in any of Bigscreen’s environments including the new Drive-In Movie Theater!

Selma, Ava DuVernay’s critically acclaimed film was broadcast February 1,  in a live, social experience, offering – a unique way for VR users to watch a thought-provoking film with people around the country, according to Bigscreen. Nominated for Best Picture at the Academy Awards in 2014, Selma is the story of how Dr. Martin Luther King Jr. led a three-month march from Selma to Montgomery, Alabama in 1965, fighting for equal voting rights for all Black Americans. There are more Selma events scheduled throughout the month, and those interested are able to rent Selma on-demand at any time at https://bigscreenvr.com/movies/catalog for $3.99 in the US/$4.99 in Canada. 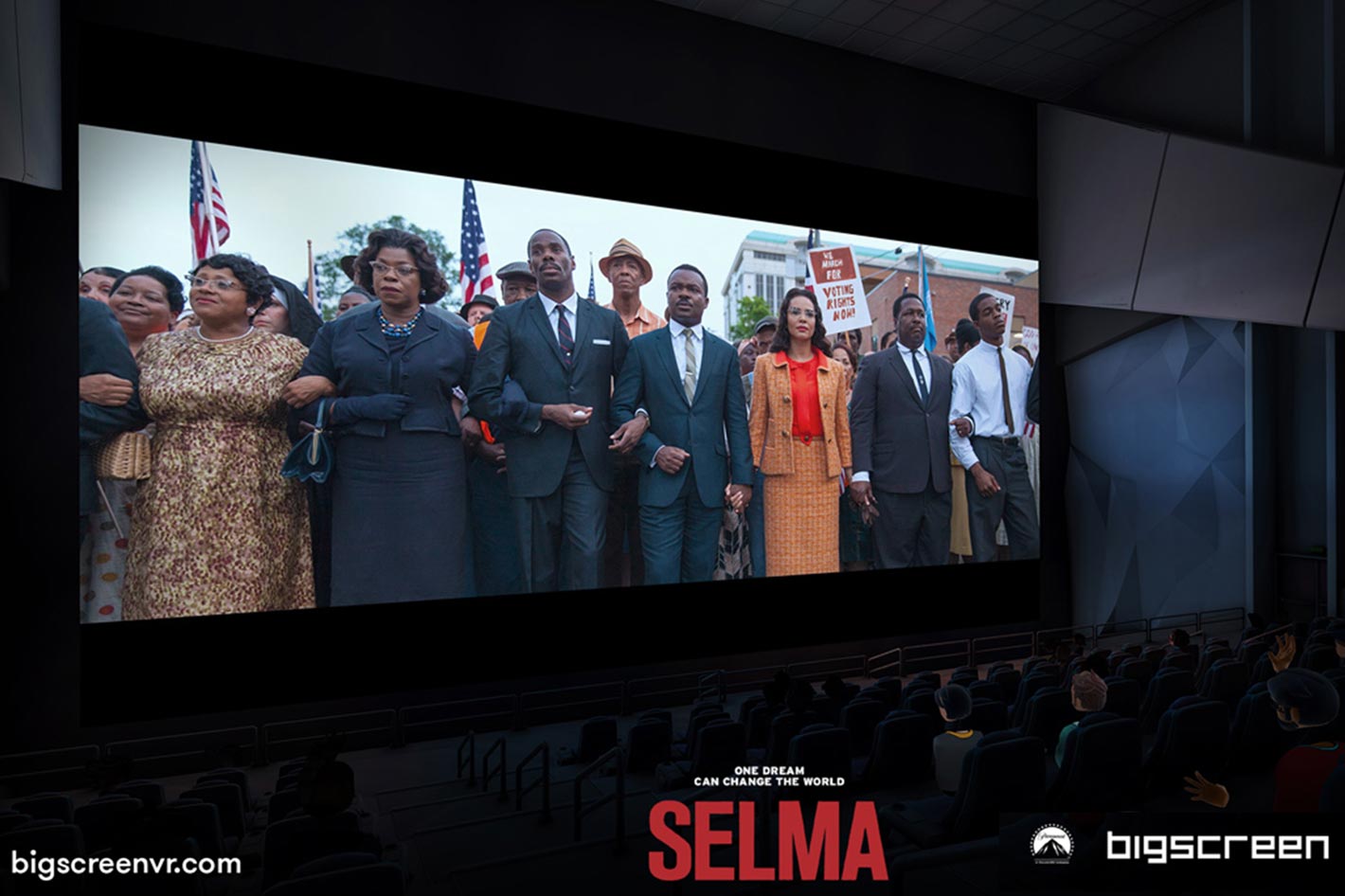 A place to watch 3D

Bigscreen introduced its Free to Watch with Ads category last January. Unlike Bigscreen’s paid movie rentals, which are partnerships with major movie studios like Paramount Pictures, these free movies are hosted on Pluto.TV and include ads from PlutoTV. Initially the movies were only available in the United States, but the company has been working hard on licensing more 3D movies in the UK and other regions. According to Bigscreen “this has been incredibly difficult because VR is such a small industry. Please bear with us while we try to sign more deals; in the meantime, the best way to help us grow the platform is to rent a movie from our website!”

The original list of films includes Arrival, Seabiscuit, Clueless, Nacho Libre, Adventureland, Blair Witch, Paranormal Activity 4, It Follows, and more. More movies are added each month, with The King’s Speech and Memento added to the list recently. These free-to-watch movies are in 2D, unlike Bigscreen’s paid movie service which has 3D movies for rent. 3D movies are incredible to watch in VR and this is, now, one of the few places where you can watch them… in your own IMAX virtual cinema. If you haven’t experienced it, try watching the 3D movie trailers in VR and rent a 3D movie from the website if you like it! 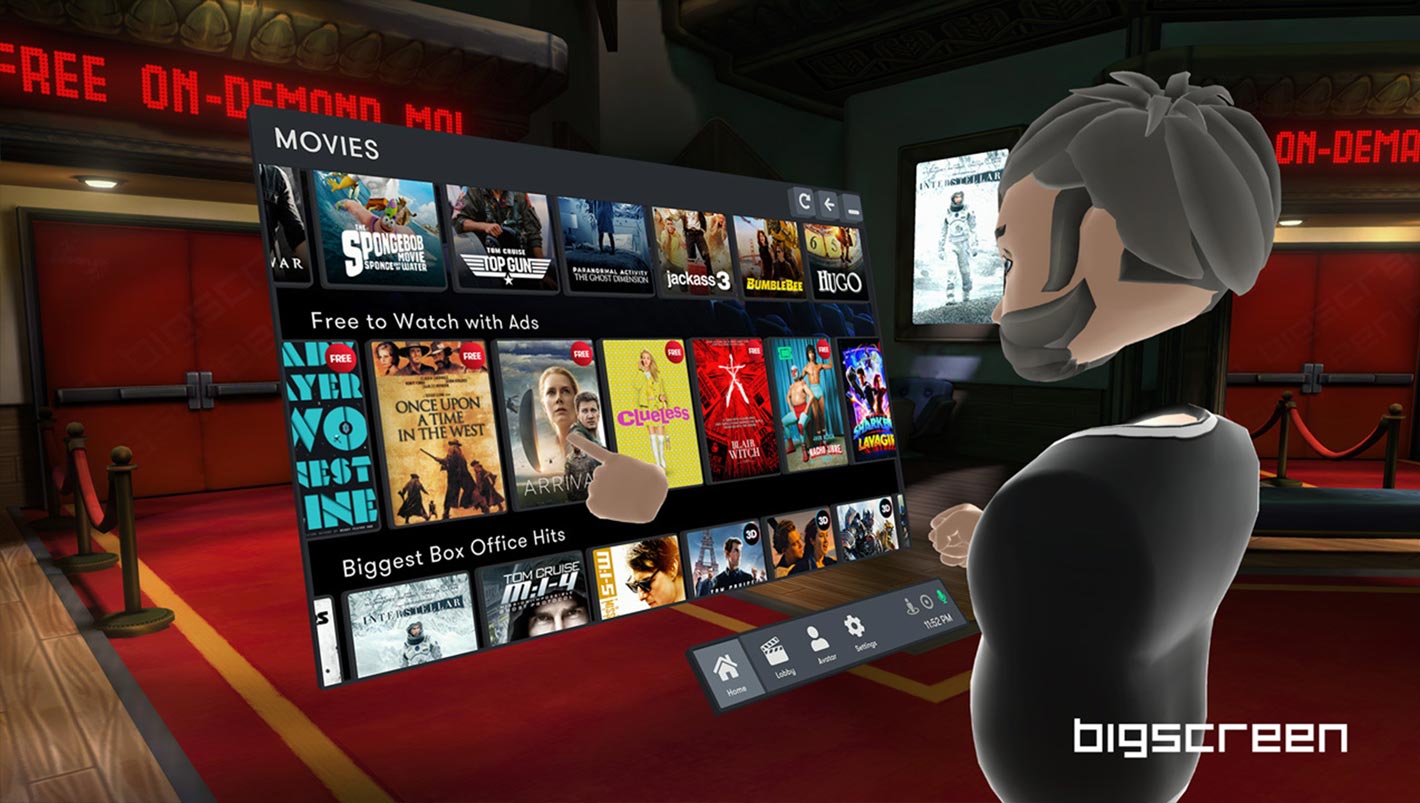 Bigscreen also introduced in 2021 free TV channels such as Rick and Morty, Aqua Teen Hunger Force, Samurai Jack, Robot Chicken, The Venture Bros, The Eric Andre Show, and more! In total, Bigscreen now has more than 172 free TV channels for people to watch.  A recent UI update released in December makes it easy to browse all this content. In addition, Bigscreen also has a free Videoplayer to watch your own video files, a free Remote Desktop feature to stream your Windows desktop screen into a room, and also public and private rooms to hang out and chat.

Meanwhile, Bigscreen continues to work on some major updates for this year, including built-in YouTube support and the integration of more streaming services in the future. The company also plans to include a new video/audio streaming technology, larger room sizes, ultra-low latency Remote Desktop streaming for Quest users, and a Friends System. The app is free, compatible with popular VR headsets and available from Steam and Oculus.