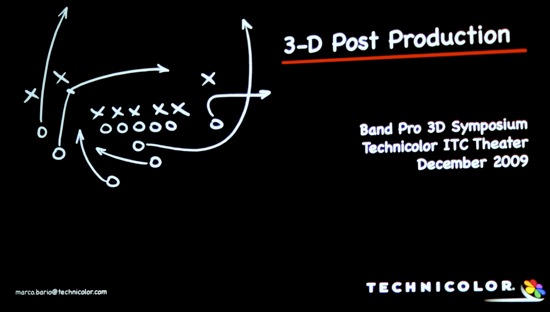 Executive summary – tools are transitioning from the custom/proprietary to the commercially rentable/purchaseable – but expertise and precision is still required to do it right! I spent the day learning about the latest in 3D hardware and software for acquisition and post – read on for all the geeky details.

Went today to a demo/panel/symposium at Band Pro focused on 3D – lots of good info.

I arrived at 10am, the scheduled start time, but everybody was still in coffee/donut ingest mode. I ran into Adam Wilt (another writer at PVC and good friend of several years), James Mathers (founder of the excellent Digital Cinema Society), and Randy Wedick, Seth Emmons, and Michael Bravin from our hosts, Band Pro.

In general, here’s my takeaway:

Tools are rapidly improving to deal with 3D – but there’s still a lot of shoehorning 3D into existing 2D workflows – that you could shoehorn at all and link’em (left and right eyes) was the progress this year, more integration needed and coming from the commercially available tools I saw demonstrated today. Cineform has made particularly impressive progress in their interoperability with Final Cut Pro, ironically by going around the API and operating an app and their own separate metadata database. Silicon Imaging continues to make good progress on their camera systems, leveraging the fact that it is really just a computer with a lens on the front. While monitoring is still a bit of a challenge for the system (solvable, but within certain constraints consistent with their approach), they’ve done some really nice work on the app and UI, and even managed to shoehorn it into a mini-PC about 1/3 the size of a shoebox (battery powerable, even).

Overall, in the big picture, to paraphrase one of the speakers, you’ve GOT to have precision and expertise. However, more of those two things are getting baked into the tools as time goes by. But if you don’t have those two things, your project is going to look bad, take longer, and cost more. There is a LOT to know to do it right, it is FAR more than just slapping another camera alongside the first one and getting rolling, and it with more variables and moving parts, any one of which out of kilter can ruin the shot – unlike 2D. In 2D, if one camera in a two camera shoot is framed slightly differently, or zoomed, focused, or irised a little differently, it is a survivable thing – you can make the shot work. Not the case with 3D.

I decided to break each speaker’s stuff into its own section (with links to photos as well) to synopsize/summarize, then include the raw (or RAW? Rimshot!) notes.

Here’s links to the articles: