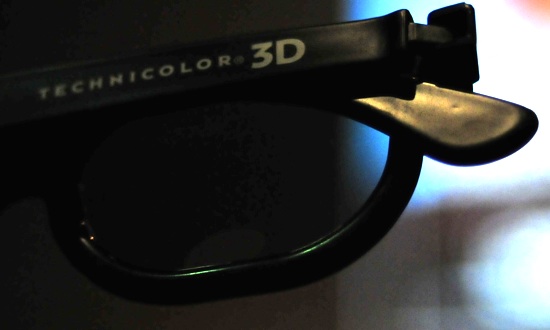 At the Band Pro 3D event held at Technicolor today, Technicolor showed off their film based 3D solution – they wanted to speed up the 3D rollout with something dependable, affordable, and available- so they went back to the future with a film based 3D projection system. See below all my notes from the panel on it today – continues after the jump.

BandPro3D_Technicolor3D – pictures of preso and slides, good stuff in here!

3D has been from rags to riches to rags again – just like The Jerk – Karl Reiner leads the class action lawsuit against the OptiGrab for messign up your eyes – a 3D parable?

they did Chicken Little in 3D as their first 3D, been involved with most 3D stuff with Disney since. Subtitles are a big deal for studio releases as well.

today the focus has been on live 3D – most of the releases have been animated so far, the number of animated titles is high – with animation, you can tweak it indefinitely and make it perfect.

lets pretend it is 2D for a minute – digital capture is still pretty new – – is pretty new on its own, combine with 3D is even more

Most of their gear is DPX based – they are a service company – they can’t dictate camera used or workflow used or how they will finish and what the deliverables are – gotta make it all look good coming out the back end.

With Red for instance, new firmwares over time, etc. – makes it “interesting” as a moving target

services- on location services- Creative Bridge – born out of 2D – a lot of teh look profiling and look production is in front of production – film is different, arrives as a can at a lab with instructions – with digital, have it on set and ready to go. DP Lights (pictured on left) – have some control over the display systems on set – if the display isn’t understood/calibrated/etc. on set it doesn’t matter what else you do.

“we are a lab company, and we don’t see film growing, we see it lessening” – before he was in post, he was a TV producer, a UPM, worked on a lot of budgets for TV shows, works on budgets now, their inability to budget a show, their ability if they knew how much film or tapes they’d shoot. A lot of unknowns around that – “wouldn’t it be nice if it could be that simple?”

If we use this model of a laboratory – “we don’t care what you’re gonna shoot” – we’re the counter where you can drop your stuff off at. OR a box you can drop your stuff in – New Mexico, Moscow, etc. – big one at facility, small one on location, any format can come in, can create elements for creative offline work to happen, and to archive. When you’re ready, you come back and we’ll help you finish it. Post production world hasn’t treated this as a simple need, has been treated as a complicated need. Conceptually, to support any platform/any workflow

Deliverables – the talk today has been acquistion touching on color etc.BUT the complexity of deliverables – the differences in color between 2D and 3D deliverables – gotta solve for brightness needs for 2D and 3D. It is a significant deal! Gotta manage expectations or customers get angry/depressed/etc. – Brightness of 2D vs 3D is very different and significant. Generally is solve the 2D and call that the hero version, then extract what you can for the smart level to solve for 3D – about 4 1/2 foot lamberts – can’t affect vibrancy of color as much. Not complaining, it is what it is. 14 foot lamberts is standard for 2D. It affects costume and makeup and set design, etc, and esp. cinematography! BIG DEAL.

6 reels is a common length in theatrical

But for 3D, that doesn’t exist! If there were a standard, the hardware wouldn’t support it anyway. Gotta pre-composite titles for 3D cinema release. 16 or 17 languages minimum, into the low 20s. There’s 60 languages roughly for a release next year. At full resolution, of course, and make DCPs from that. They have tools to help solve it, but it is something to consider.

Digital is going to happen at its own pace, Technicolor is supportive of that transition, but if gonna invest into a 3D picture (big studio level) – want as many 3D screens as possible – so Technicolor – gotta be affordable, on the market, etc. – Technicolor 3D is a new film based solution – when they created DI in about 2000, it took until 04/5/6 to get to be mainstream.

Can we take something with underlying ideas and put new tech on it and make it good?

Has a different look/feel between film/digital 3D. Positioning it to not compete with digital 3D, to compete with 2D film prints – get 3D out there on film.

(without seeing it yet, sounds like not as good as 3D Digital, but preferable to 2D)

Easy to run for 2-2 1/2 weeks, the usual 16 year old projectionist – the changes made etc. – allowed to run it as easy as another 2D show

Availability – have over 1000 lenses available in the next two weeks –

Affordability – creating a pay-as-you-go fee structure – no upfront multi-$10Ks – gotta invest in a silver screen, and that is your only upfront cost – working with Deluxe, Kodak, Fuji, financing help for the first 500 – zero upfront fees for those

over/under process for L/R, in same 4 perf space (proprietary aperture) – split lens architecture – circularly polarized light – compatible RealD glasses – how they are polarizing the light – how they dissipate heat – polarizers used to burn out daily/weekly – have run 160 AMPs open gate for over an hour without burning it out – don’t recommend it, but that’s a pretty good torture test

this is film, not digital

(scenes of Car Wash, The Movie and Monsters vs Aliens) –

How To Train Your Dragon is their launch

Q: the pulldown/shutter sequence/frame rate
A: is still 24 frame (not showing images sequentially – both at same time) – two bladed shutter (since most common in field) the sweep of the shutter may/may not affect the 3D, he doesn’t know,
Q: a 5-10% rolloff at top, why?
A: hot spotting on a silver screen? If there’s any feathering, you can get that effect

Q: had heard a much higher frame rate of 3D projection was a help – so what about this at 24fps?
A: for digital, does triple flashing – overall signal at 144 fps – L/R/L/R/L/R for a frame, then do it again – because not getting both eyes on screen at the same time – can cause eye strain when panning due to strobing issues – this is a more comfortable 3D experience since both images are on the screen at the same time

Q: anticipating work or qualifications on lamp housings since it isn’t mirror image over/under – the center of the image circle is top one eye bottom the other?
A: there’s some juju done – putting images over/under, how to balance luminance across each eye, center to edge hot spot, etc. – there’s extra math to smooth out the optical results

Q: for projector, what to do?
A: change the lens assembly – similar to changing flat to scope. Want to be proactive about QC, who does the convergence check, assess the underlying 35mm system, keep it in SMPTE spec. Gotta converge them in, gotta dial it in for different throws, etc. – has to be set once and locked in – your horizontal and vertical convergence is now set for THAT auditorium. Once the certified installer has set the lens, put the lens in, focus it, and they are done. There is a lens mount. Is there a white paper? No, there’s a handout, or contact this guy directly

Q: How many rooms in this Friday for Avatar?
A: Fox/Sony/Disney are not publicly backing this, so ZERO.

Disney is the holdout, Fox has none scheduled for 2010, for the studios onboard represent the majority of the pictures for 2010

Q: how many silver screens are still up there? What about keystoning?
A: silver screen availability is the big question – working with all the silver screen manufacturers, – if you want to do 3D at all – get in the queue now or you’ll miss the opportunities – Pirana, Shrek, etc.

Q: what about the home experience?
A: they are focused on theatrical for now – if the consumers are having a bad experience, that’s a serious problem. Technicolor will be a big presence at CES 2010 on this. Technicolor is working with the CE (consumer electronic) companies on Blu-ray 3D

Q: finer grained film stock since
A: we aren’t forcing a decision – done tests with Vision, Premiere, Fuji, etc. – all looked pretty good. This was a 2K process demo’d, a 4K could be done as well

Q: silver screen?
A: you get additional brightness over a matte white screen – 3D is light starved so want as much light as you can get. Light polarization is the most comoon way to get the stereo – one eye is clockwise and the other is counter clockwise – silver screens do the best job to hold the 3D effect across the entire screen. Dolby does matte screen with their color filtration process.

Q: If light isn’t a problem, couldn’t you go to a 3 bladed shutter?
A: Yes, you can/could. they are about 20% light efficient. Dolby is 9-10, others are around 12%. If you’re running SMPTE spec (laugh about how many do) running 16 foot lamberts, silver screen doubles that, get about 6 foot lengths

Q: to handle different screen sizes/throws – is this an adaptor for each setup, or what?
A: when exhibitor places an order, they inform Technicolor what throw, size, etc – so Technicolor sends out a customized kit structured for that

Q: Applicable for 1.85 and scope?
A: Scope is the container, the 1.85 sits withinthat container

Q: how to handle constant width theaters?
A: they’ll have to pillar box

Q: framing marks and what other things providing for projection?
A: yes providing a custom projection aperture, can write in the “camera aperture” what is out side the projection space, putting in obvious indicators so very obvious where to splice – even in 2D, projectors can be misthreaded – wanted to provide a recovery path – if it appears that you’re out of frame by a per or two, there’s a visual indicator to indicate “when you see this, you are fine” – simlar to an RP35 alignment piece – a customized RP35 and some other pieces customized to 3D, bleed between eyes, color balance and other stuff