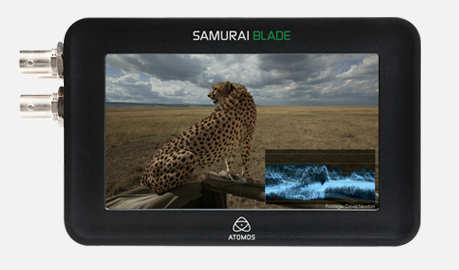 Atomos, creator of award winning camera-mounted recorders and recording accessories announce a new price for the Samurai Blade of US$995. The Samurai Blade is the highest functioning monitor recorder and playback device on the camera market today and with a new price it's even more affordable than ever.

“This new price reflects the Atomos way – the savings we get from producing in higher volumes is passed on directly to our users.” said Jeromy Young, CEO and Founder of Atomos. “With both our HDMI and SDI monitor/recorders under $1,000, the days are numbered for monitors that don't record or playback”

Launched at NAB 2013 the Samurai Blade was the first Atomos monitor to include the SuperAtom IPS screen – super sharp, super bright, super blacks – right down to the last atom. It has fast become the go to recording device for thousands of cameramen and DOPs. With full waveform functionality, the Blade is a monitor that records and a recorder that truly monitors.

“When I am filming Manhattan in 4K, I use the Blade to simultaneously create HD ProRes HQ files, which saves room on the camera's SXS cards, while delivering a file ready for editing. 4K is coming, but not everyone wants it right now, so, being able to deliver footage in the ProRes HQ format, while archiving the 4K makes my workload a bit less, while still setting us up for the future.

About Atomos
Atomos designs and manufactures creativity weapons for filmmakers: affordable, easy-to-use monitor/recorders and converters that save video professionals time and money, without sacrificing quality.

Atomos is based in Australia with offices in the USA, Japan, China and Germany and has a worldwide distribution partner network. Further product information can be found at www.atomos.com. Connect with Atomos on Facebook or follow on Twitter (@Atomos_News)