Even if your HD project isn’t destined to be shown over the air, you’ll still want your client be able to play it on an HDTV set

Even if your HD project isn’t destined to be broadcast over the air, you’ll still want to have your client be able to play it on an HDTV set, not just on a computer. The good news is that you have several options to make that happen, including Blu-ray, AppleTV, and the brand-new WDTV device from Western Digital. During this transitional period, it is often the producer who influences the client as to which HD player to acquire. Many producers even incorporate the cost of one of these HD players in the project price and then give the device to the client “as a gift” with the first HD project, if the client doesn’t already own any HD player. It’s great to have options, but you must understand them fully (both their strengths and weaknesses) in order to pick one, two of them, or all of them, depending upon the exact format of HD you have produced, the hardware you own (or are willing to buy), the type of client, and the type of delivery. This article will help you learn the details that will help you make the appropriate decision. 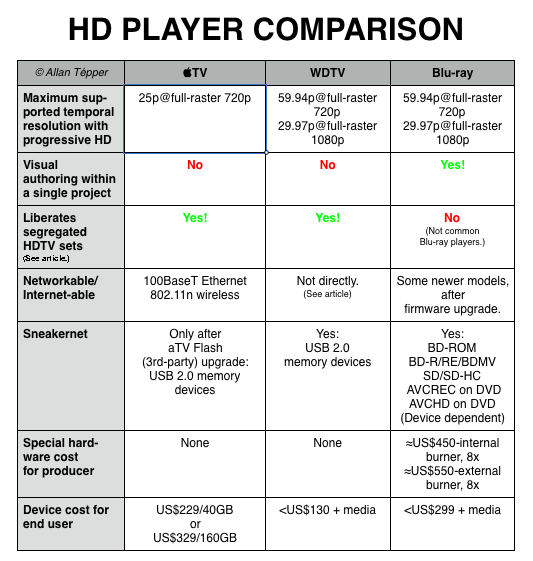 AppleTV from a consumer perspective
?AppleTV is the name of a not so new device from Apple. Apple’s goal with this product is that the owner of every 16:9 video screen accompany it with an AppleTV to play various types of content. AppleTV can play photos, audio, and video… and the video can be full-raster HD (see important details ahead). The content can come from different sources, including the media produced by the user, the user’s audio collection or video collection (DVD or other source)… or may be videos purchased or rented from Apple’s online iTunes store. In fact, the latter is probably what Apple had in mind when first designing, manufacturing, and marketing AppleTV. Many analysts and journalists have suggested that Apple even sells the AppleTV device as a loss leader, just to promote sales in the iTunes store. Fortunately however, Apple doesn’t limit the use of the AppleTV device to that source.

With measurements of just 197 x 197 x 28 mm (or 7.7 x 7.7 x 1.1 inches), the AppleTV device is very small, yet very powerful. It contains a hard drive and has audio/video output via HDMI, as well as analog. One of its slogans is “Like a 21st century DVD player”. Another says: “If it’s in your iTunes, it’s on your widescreen TV.” The second slogan is 100% true, since the iTunes content of up to five computers in your house or office (Windows and/or Mac) can synchronize with (or stream live to) AppleTV. The first slogan is partially true, because although AppleTV acts as a movie player, it has absolutely no tray or slot to place or insert a DVD or other type of optical media. However, if one has a DVD, one can rip/transcode the content on a computer and send it to iTunes for playback on AppleTV. The synchronization or streaming happens either via 10/100BaseT Ethernet or via 802.11n WiFi. The ideal códec for AppleTV is H.264.


YouTube via AppleTV?
In June 2007, Apple added the option of viewing YouTube videos via AppleTV, without having to download them first to a computer. This works with those videos that YouTube has encoded into H.264 so far. YouTube has already encoded many of its most popular videos into H.264 and has promised that soon, new videos will also be encoded in H.264, although I haven’t verified whether the are really doing it with all of them. YouTube has traditionally used Flash, at very low quality. 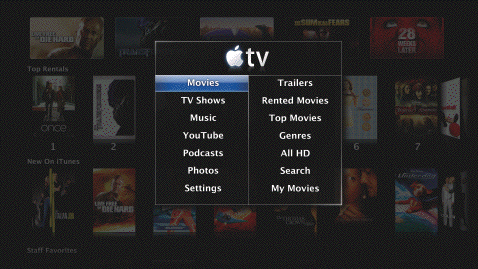 AppleTV’s user interface?
Like the majority of Apple products, AppleTV has a multilingual user interface which is both intuitive and attractive, with excellent animated graphics. Of course, AppleTV includes a wireless remote control which allows access to everything that’s on the internal drive, plus on-line movies and podcasts directly from the couch.


AppleTV from the producer’s perspective
?Fortunately, no special burner is required to prepare and deliver your HD video material for AppleTV. However, no visual authoring is possible within a project. Only individual files can be created. If the file contains chapter markers, they work in AppleTV, although without labels. For full-raster 720p HD (1280×720) on the current AppleTV, the maximum framerate is 25p, and that will work fine even if your client owns a segregated HDTV set, which is very common now in the USA. (See my related articles: When 25p beats 24p and Liberating segregated HDTV sets). If your framerate is higher than 25p, you will have to reduce your spatial resolution to 960×540 for the current AppleTV to keep up. The current AppleTV doesn’t play any 1080 formats. The ideal códec for AppleTV is H.264. Many other códecs can by added via a third-party consolidated upgrade called aTV Flash, which also adds sneakernet (via USB devices) and other capabilities. Fortunately, aTV Flash can be installed without surgery, and without affecting the AppleTV’s warranty.


Delivery for AppleTV:?
If you are “giving” the AppleTV unit “as a gift”, you can load the encoded-for-AppleTV file on the AppleTV’s hard drive before delivery.? From there forward -or if your clients already own one-, you have many options, i.e.:

Next page: WDTV from Western Digital

WDTV from a consumer’s perspective
The new WDTV from Western Digital has a lot in common with AppleTV: 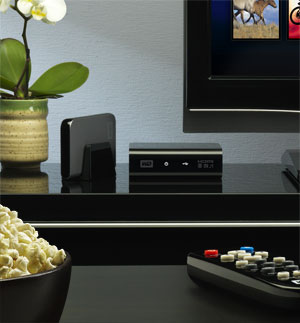 You’re about to ask me: “Why in the world didn’t Western Digital include any network port on WDTV, especially since they manufacturer and sell NAS (Network Attached Storage) devices?” Well, Western Digital is mainly a hard drive manufacturer. Logically, they hope that all WDTV users will buy their hard drives to feed it, especially since WDTV comes with a stand for Western Digital’s portable drive, called “My Passport”. However, you can use any brand of USB hard drive or flash memory. Forums are filled with people whining about the lack of network port on WDTV, and many people are desperately seeking a NAS device which boasts simultaneous use of the Ethernet and USB 2.0 port. This would indirectly add a network port to WDTV. If you find one, please let us know! I will update this if we find one appropriate.


Delivery for WDTV:?
If you are “giving” the unit as a gift the first time, you can load the content onto a USB memory device. You many even find that your entire production fits on a very inexpensive USB flash drive.

From there forward -or if your clients already own one-, you have many options, i.e.:

Next page: HD-DVD and Blu-ray

HD-DVD and Blu-ray?
As has been intensely covered in the press, HD-DVD and Blu-ray are (or were) two competitive formats that attempted to replace traditional DVDs, allowing HD. This time, the VHS/Betamax-type war ended quickly, when Toshiba announced the end of HD-DVD in February 2008. Although Blu-ray no longer has to compete with HD-DVD, it hasn’t become very popular so far, although there are predictions that it will come down in price enough by December 2008 to make that possible.


Delivery for Blu-ray and/or AVCHD on DVD
If you aren’t looking for replication (high numbers), it is necessary to purchase a Blu-ray burner (about US$450 for internal 8x or about US$550 for external 8x), and (unless you already own it), a Blu-ray authoring software tool like Adobe’s Encore CS4 (more advanced and higher cost) or Roxio’s Toast 9 (simpler and lower cost).
For very short durations, you may alternatively choose to create an AVCHD and burn it onto a conventional DVD. Fortunately, both Encore CS4 and Toast 9 can do that. Many (but not all) Blu-ray players can play AVCHD on DVD disks. Even if you are going to burn a Blu-ray, you must warn clients that they must have a Blu-ray player which plays BDMV disks (as opposed to replicated Blu-ray disks). Fortunately, some of the Blu-ray players which originally couldn’t play AVCHD on DVD… or BDMV can now do so via a firmware update. Unfortunately, on the other hand, at least one manufacturer has removed these two features with the latest firmware… so this is definitely a concern for producers who may not have control over the models of Blu-ray players used by the clients. In that situation, it may be advisable to include a disclaimer, i.e. “This AVCHD on DVD is playable only on players offering this compatibility” or “This BDMV is playable only on players offering this compatibility”.

This article originally appeared on the Web Video & Beyond channel. Click here to see the original comments on it.