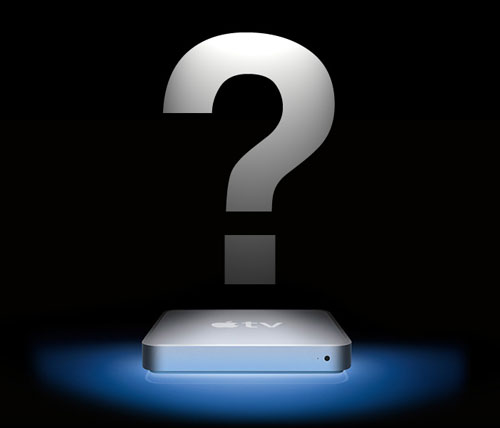 I very carefully and duly noted when Steve Jobs, during an interview, said that Apple had 3 businesses (Macs, iPods/iTunes, and iPhones) and a hobby (AppleTV).

If that wasn’t a tacit, explicit admission that a product hadn’t done as well as they’d hoped, I don’t know what is. To launch a product and then call it a hobby, you might as well say “Dude – it tewdally tanked.”

And with good reason – more expensive than a DVD player, with less content available, AppleTV didn’t add up to the sum of its parts in consumers eyes.

For high end users, it made for a nice way to have a good interface to their iTunes library that was constantly available, and also display pictures in high def on an HDTV. As bonus round, it could play movies in a pricey, low quality format, and Oh Cool! – it also could play back purchased TV episodes if you missed them. This was how I perceived it when I bought mine, and quickly realized I wanted a MUCH bigger hard drive than the 40GB unit it came with. * I was enamored and excited about it enough I even started a blog about it called AppleTV Hacker (which I haven’t updated since last August).

So I was pleasantly surprised to Steve Jobs spend some time talking about AppleTV again at this year’s MacWorld, as he described it as AppleTV Take 2.

The Good News: MAJOR update to functionality and interface, with price drops to boot. Even better, FREE software update for existing users such as myself.

The Bad News: It is a free update because the hardware, other than revamped hard drive capacities, IS EXACTLY THE SAME.

So perhaps a more fair and accurate description would be to say it is AppleTV SOFTWARE Take 2, NOT AppleTV Take 2.

The rules aren’t easy to figure out – quirky and restrictive but easy is what Engadget called it.

Ars Technica has had good coverage of all things AppleTV, and they have a nice round-up of the new features in particular in this post.

The big new announcements were as follows:
-movie rentals – via iTunes as well as DIRECTLY from the AppleTV
-some of these will be high def movie rentals
-the UI has be revamped to be better and easier and prettier
-new, bigger hard drives available – 160GB in addition to stock 40GB

This article isn’t to rehash that news, but to take a look at where this will put the AppleTV.

Apple at one time stated they wanted this to be the DVD player for the internet. Now that they can directly download movies (rentals anyway), especially in HD (FINALLY!), it puts them in competition with the following:
-traditional DVDs
-cable DVR (for TV shows, but not HD)
-HD DVD & Blu-ray discs
-VCR (anybody still use these? I have 3 or 4, haven’t in years)
-Blockbuster?
-Netflix?
-Xbox360 movie downloads
-and perhaps regular TV/HDTV…maybe

So how does it stack up against these? Lets look at what it does do:

Apple claims you can now watch HD movies on AppleTV. OK, but here’s the biggie:

Just how “HD” is AppleTV?

For starters, think of AppleTV as a super cheap computer playing back QuickTimes – because that is exactly what it is, with a customized version of Front Row.

AppleTV can play back HD content…sorta.

Next part of the HDTV picture – frame rate. AppleTV can do 720p. The broadcast spec for 720p is 60 fps (frames per second). Surprise! AppleTV is rated for a maximum of 24fps at 720p resolution – so it can’t do broadcast frame rates.

Egads, that’s bad. So what can it do?

And as far as framerate goes, that is STILL half the temporal resolution of eithe of the HD resolutions – 720p is 60 progressive frames per second, and 1080i is 60 fields (half frames, every other horizontal line) per second.

For starters, this means that if Apple wants to sell you any broadcast TV show that was aired or produced at 60i or 60p, they have to cut the resolution to 1/4 the original pixels, the cut the framerate in half….so you’re getting 1/8 as much information as you coulda/shoulda. Not so spiffy.

Last year, when Blu-ray and HD DVD players were selling for $600 and up, AppleTV’s position make some financial sense. This year, with HD DVD as a format going down fast * with half of one wing left and both engines aflame, chucking players overboard at $100 a pop at WalMart…that’s not hugely compelling anymore. Blu-ray players are dropping fast too – as low as $310 (just checked Amazon)…Apple doesn’t compete there.

And then there is the datarate – all three (HD DVD, Blu-ray, and AppleTV) can use the highly efficient H.264 codec. IF my VERY quick and dirty Google based research is right, here’s the maximum datarate for combined audio and video:

You can see the crunchiness of AppleTV HD encoded content more than you can in HD DVD and Blu-ray content, and it isn’t a surprise why, when you can have up to eight times the datarate available. So AppleTV pictures look crunchier than Blu-ray and HD DVD…and they always will unless the datarate limitation changes substantially…which I doubt, since the GPU and CPU of the AppleTV aren’t terribly high powered.

Then there is the issue of formats – AppleTV ONLY supports H.264 files, and only within the above constraints, and only openly encoded files or Apple Fairplay DRM encoded files (and only files your particular machine is authorized to play, at that!) No Flash, no MPEG-2 from a DVD. No Amazon Unbox or anybody else’s downloadable DRM’d movies, either. Hmm.

The interesting question is to see whether the market for video content (movies & TV shows anyway) will follow audio’s path – will fast and low quality beat slow and high quality?

The next question is that of content – Apple’s new rental agreements means there will be a (claimed) total of 1000 movies available for rent. That probably exceeds the number of titles available on HD DVD and Blu-ray (I have NOT done my research on that attribute, basing that on walking the shelves at Fry’s today – so somebody bust me with accurate numbers if you have them! It is 4am as I write this…)

All this said, however, I think the rental model will give Apple a push with AppleTV, Big Time. While Blu-ray and HD DVD deliver a vastly superior picture, and XBox360 downloads are superior in quality, and Amazon Unbox is a product of Amazon…Apple being Apple (with their marketing skill, clout, and 18 billion in cash and no debt) will rule the roost of digital downloads this year and probably for a few more. Of course, that may be King Poop of Dukey Mountain in comparison to DVD sales and rentals this year, but what about in 5 years? Apple is the only player (so to speak) in this market that can deliver a digital file over the Internet that will play on Mac, PC, set top box (Apple’s own AppleTV), iPod and iPhone (although regretably not all at same time). Nobody else can come close to that, with the marketing muscle to not only promote it heavily and nationally but also the muscle to get ALL the major studios to agree to make their content available.

And that alone will make Apple the winner in this field.

Suddenly, I don’t feel so bad about Apple’s stock plunging from 200 to 130 over the space of a few weeks.

Apple’s real competitors, at this point in time, are Blu-ray, Netflix, Amazon, and pay-per-view.

Blu-ray offers vastly superior quality, but if Apple’s plans hold, Blu-ray won’t have as much rentable content available (through Netflix, for instance). But you have to go to the store to buy/rent, or wait for Netflix to deliver.

Netflix offers a huge library of DVDs, Blu-ray and HD DVD movies with a 2 day delay. iTunes has a more limited library, but faster access.

XBox 360 movies? Nobody knows about it, too little content, and Microsoft isn’t pushing it hard enough nor getting enough press about it. Too bad for them, the picture quality is superior.

I see the real competitor to Apple in this space is Pay-Per-View. Content is limited but trendy and up-to-the-minute. The audio/video quality is better, the access is even faster than iTunes, the cost is higher (pay for what you get), and, significantly, millions of set top boxes already offer this feature.

I’d never, ever utilized the HD pay-per-view service until the past month or so, to watch Next, Hostel Part 2 and other late night, I’m-bored-and-want-junk disposable movies. Perhaps it was the iTunes rental model that legitimized in my own mind, I don’t know.

The interesting thing will be in a week (or two) when I can update my existing AppleTV and have the choice between them – which will I pick?

* After recently upgrading my laptop, the old drive is heading for the AppleTV, once the new software is out and somebody publishes a How To on the software shenanigans involved in…oh man, I don’t even want to describe the general steps. Suffice it say, if the girlfriend’s away for a full day some weekend, that’s what it’ll take….or several evenings of watching TV with computer guts and a laptop in front of me…like I have that kind of spare time on my hands right now…digress digress digress. And by the way, this and the Macbook Air might both seem to read as “How does this product blow? Let me count the ways….” articles. I’m not going to be all negative on this sight, these were just topics I wanted to discuss, so they ended up here. Fret not – I’ll hae plenty of effusive Apple praise soon enough, I’m sure – I still loves me my iPhone, Macbook, and Mac Pro, don’t you worry…

** …and the HD DVD group is spending $2.7 million for a SuperBowl ad whilst the format crumbles in both studio and consumer favor – “Burn, Rome, burn! Yeeeeehaaaaaaaa!!!!!!”

OK, one more tidbit to think on – once the rental market is up and going…how do we hook into iTunes to do rental indie content, or pay-per-view podcasts and indie movies, etc.? How do indies get their content in there?