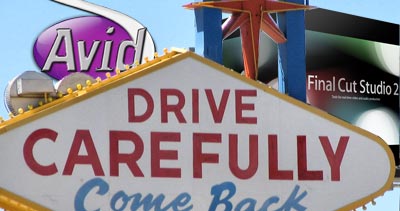 Both Apple and Avid cited the same reasons for taking a pass at this year’s NAB convention, claiming they can spend valuable marketing dollars meeting customers in smaller venues. Avid expected to spend $6 million in Vegas before pulling the plug, averaging just about $60 per attendee.

Taken at face value, the companies’ decisions make sense. Let’s face it. How many of us get any information in the booth that we can’t get online from our hotel rooms? Booth presentations are so tightly scripted that by Wednesday my colleagues and I have most of them memorized. There’s nothing to learn in the booth, and quite often the presenter knows nothing more than the script.

Those offices camouflaged within the giant set pieces throughout the booth are another story. That’s where the suits court the checkbooks. Avid’s booth attracts checkbooks. Last year Avid may not have made any groundbreaking announcements at NAB, but tumbleweeds certainly weren’t drifting through the booth either. Sell a couple of dozen Interplay installs, a hundred or so Unity Isis systems, and, more importantly, get a bunch of qualified leads for large facility installations, and that $6 million isn’t too badly spent.

Is there another reason why Avid opted out?

For Apple, the overwhelming bulk of its sales are $1,300 boxes of software, and while a goodly number of broadcast executives come to kick the tires at the Apple booth, they must driven to distraction by the ironic t-shirt, thick-framed glasses, iPod-toting crowd three deep at every station. The Apple booth at NAB in recent years looks more like the Apple Store on Black Friday than a gathering of broadcasters.

In fact, even Apple’s big Sunday press conference has taken on the personality of a rock concert. Nearly everyone attending NAB can attend the press event. It’s hard not to get invited. The place is loaded with giddy fans. Every announcement is followed by wild applause. Even features that have been in competing products for years are received like the heralding of the invention of the wheel. Don’t get me wrong. The products are worthy, it’s just the crowd often doesn’t understand why. Apple’s wildly profitable. An annual $6 million expenditure on Kool-Aid isn’t likely to get investors complaining.

So why did Apple pull the plug?

The business cases for backing out of NAB

Insiders and the well connected have known for some time that no big announcements had been slated for NAB. Rumors regarding the future of Apple’s ProApps and Avid abound. Word on the street is that Apple has been shopping ProApps around since late last summer, and a deal was close last fall. Now such rumors have reached a fevered pitch, with ProApps apparently sold with all but the final announcement to be made. Potential buyers include Thompson, which has been on an acquisition spree of late, and would love to add an industrial strength NLE to its newsroom offerings.

No one will speak on the record for attribution. Until then anything can happen, but sources say morale in the ProApps group is low. Key members of the team have been moved to consumer-focused products like iMovie. Others have begun preparing for life after Apple.

If this is the case, Apple has little reason to throw a party for ProApps, and lopping a few million from the expense column makes the unit a lot more attractive to a buyer.

Unlike Apple, Avid professional video applications contribute significantly to the bottom line. While NAB is expensive, banner ads on NYTimes.com and TV spots are not a viable alternative. Avid serves the professional market and needs to be where professionals are. Perhaps road shows and smaller venue gatherings will meet Avid’s marketing needs better, but it’s a questionable strategy. Sony, Panasonic, Harris, Quantel, JVC, and Autodesk surely don’t enjoy cutting multi-million dollar checks for trade shows, but none have found a better model. It’s hard to believe Avid has stumbled upon it. Avid’s absence at NAB will look like surrender to key constituencies.

Change is in the air at Avid. The new CEO is a shake ’em up kind of guy. He has no video industry experience, but he’s got a lot of restructuring experience. Again, yanking $6 million from the marketing budget makes the post production unit more attractive to potential buyers. By NAB 2009 Avid is going to be a very different company. There’s no point in telling a 2008 story. Avid’s customers take a long view. They want a roadmap, and right now the GPS is down in Tewksbury.

What it means for editors

Apple’s ProApps have changed the post industry. The $60,000 NLE is a thing of the past for all but the largest facilities. Final Cut Pro lowered the barrier to entry to professional editing. We can argue the merits of lower prices and increased competition, but the change in the industry has been profound and is permanent.

NLEs are a mature product category, but there’s still a lot of room for improvement. Color grading has a ways to go – Apple’s Color is a wonderful tool, but it doesn’t work easily or reliably enough for most of us to trust it with big jobs. All NLEs are still to 601 or HD-focused. Delivering for DVD, IPTV, the web, and mobile devices remains an often frustrating and multi-stepped process from timeline to final format. It’s interesting that Adobe, not Apple nor Avid, has been working most aggressively in this area. We love our iPods, but there are scores of other devices that we need to master video content for. Apple has been reluctant to make is easier to meet those needs, and Avid’s left it all to third parties.

When the dust settles, after the tumbleweeds have meandered through the space formerly occupied by two of NAB’s largest presenters, Adobe will be the big winner. It’s the case of the tortoise and the hare. Adobe’s evolution over revolution approach, smart acquisitions, and ability to keep its installed base happy positions it well for the next decade.

Final Cut Pro and Avid aren’t going away soon, but Avid’s pricing model has to change yesterday if it’s going to stem the erosion of its NLE market, and Final Cut Pro, if it is sold, will have to re-establish its brand. Without, hip, cool, and very successful Apple behind it, it’s just another software bundle that feature for feature has stiff competition from the Adobe’s Production Premium CS 3.

It’s a safe bet that a lot of those NAB visitors who typically spend a couple of hours in the Apple and Avid booths, will be hanging around the Adobe booth and watching the presentations a little more closely this year.