Recently, Apetus announced the start to their crowdfunding campaign for the Axiom Beta camera, which might be one of the most affordable 4K cameras yet.

At the rate of speed new cameras were hitting the market, I was worried, as a backer, that the Apertus Axiom Beta camera might be too little too late.  Thankfully, I was wrong and the group of volunteers behind Apertus have put out one of the more interesting cameras to date.  The only camera that resembles the Axiom Beta's potential is the URSA.

On their Indiegogo site you can buy the camera, except the sensor, for $390 to $450.  This is their cost to assemble the camera. Then, as the campaign ends, Apetus will buy all the sensors in bulk and sell them to backers at cost.  The sensor is the biggest cost in the equation.  Once the campaign has ended the total cost of the camera will land more around $3500 for the Super 35mm sensor and $2900 for the Micro 4/3 sensor. 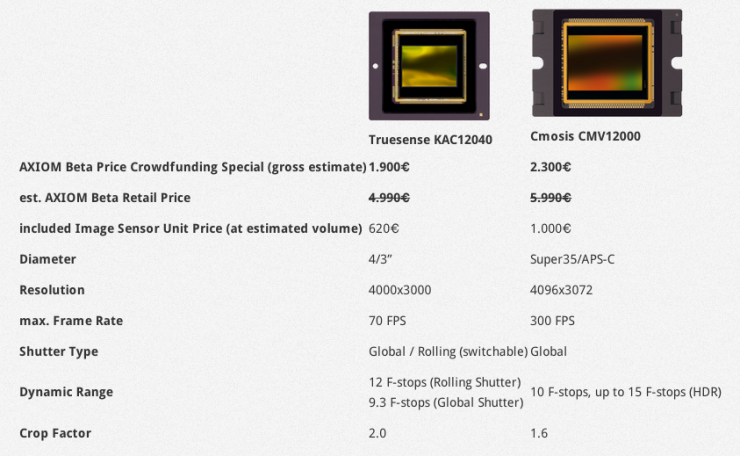 Much like Blackmagic Design's URSA, the Apertus team wants their cameras to be upgradeable. More sensors, more framerates, and a lot of lens mount options.

CHANGE HOW WE VIEW CAMERAS

Apertus might just start a revolution for camera owners/operators.  As the Axiom Beta takes the open source ideology and runs with it I think, more hope, we will see a shift in camera manufacturer's ideas about selling propriety cameras that require a brand new purchase every two years.  What we want is a camera we can upgrade and make our own.
For more information on what I think is the better sensor option, Cmosis CMV12000, here is their video describing the features found in the sensor.

A TOUCH OF HUMOR

For anyone who chooses to become a Platinum Deluxe donor… cheers to you. 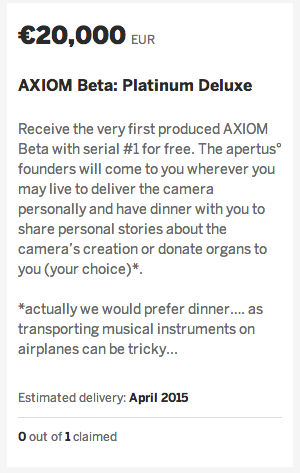