We push the F35 as far as it can go–and then some! 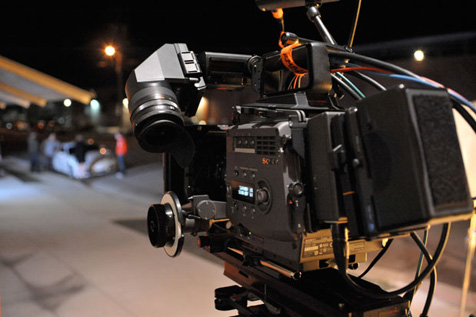 When the economy goes south, I go into fifth gear. I recently seized the opportunity to shoot a couple of spec spots with director Ian McCamey, formerly of The Orphanage, and our first project together was a spot for the Porsche Cayman. A Cayman pulls up in front of a club and, like a magnet, drags three people onto it–and one ends up in the passenger seat in the last shot.

Not having production insurance threw a crimp into our plans until we realized that we didn’t need any if we could shoot the spot at a rental house. I threw myself onto the mercy of my longtime friend and DIT Jay Farrington, partner in Chater Camera, and asked if we could shoot our spot in front of his building through the shop’s roll-up door. He readily agreed, provided the weather and his rental schedule cooperated. It took about ten days but the planets finally aligned, and we found ourselves shooting on Ninth St. in Berkeley on a Friday night.

Chater Camera has one of two Sony F35’s in Northern California (Videofax has the other) and they have the only set of Arri/Zeiss Master Primes in the area. It was great fun to be able to play with the newest and greatest toys… and they totally saved our bacon because we wouldn’t have been able to pull this shoot off without them.

I suppose you want details. Then read on…

Joining me in crime were DIT Louis Block, camera assistant Rod Williams, and fellow DP Alan Hereford, who stopped by on his way home from a job to lend his support. Also helping were Ian’s friend Kevin Bailey, who served as VFX supervisor and starred as the driver, and a cast of a dozen actors and extras. 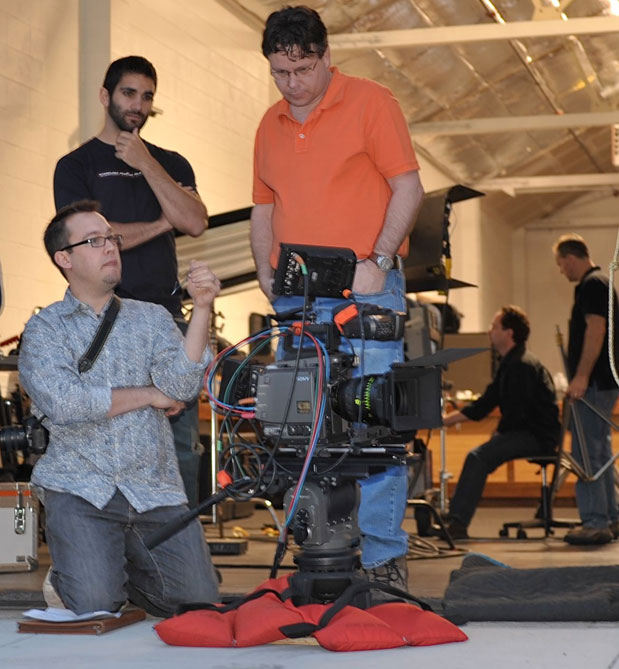 The trick was trying to light 30′ of sidewalk with whatever lighting/grip was available at a camera rental house. Initially I tried using an 800w PAR aimed at the car just to see where the exposure fell and to see if I could pull off a very clean and neat single source look. While placing the hot spot of the PAR on the car lit it up to a reasonable exposure level, and the fall-off from the sides of the beam gave me consistent exposure down the length of the sidewalk, it looked nasty and lit. It was technically correct but artistically incorrect. So I changed tactics and decided to focus simply on making the shot look pretty and then figure out how to expose it properly once it looked good by eye.

Our AD relays Ian’s instructions to the actors via iPhone.

The result was two Kino Flo 4’x4 lights hidden against neighboring office roll-up doors, standing vertically and hidden by door jambs; the 800w PAR bouncing off two 4’x4′ bounce cards near the camera; and a open-face tungsten 1k hidden around the far end of the building lighting cars in the background. The Kinos were bulbed for daylight while the Par was gelled with double CTO, and I asked Louis to split the camera’s color between the two so we had a nice warm/cool mix. We also exploited a practical fixture that was mounted too high on the building for us to block: it was daylight-balanced and its light came from the same side of the frame as the Kino Flos so it blended right in. There were several daylight-balanced practicals hung over doors that we couldn’t turn off so we diffused them with one of my favorite diffusion materials ever: typing paper. The hard practicals became soft, subtle glows that added a sense of depth as the talent walked past them. 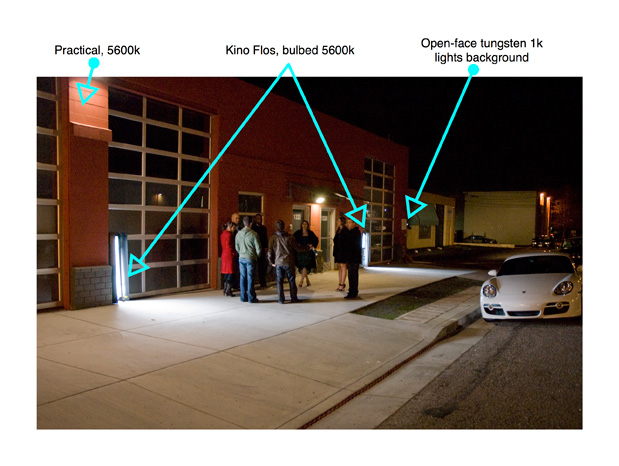 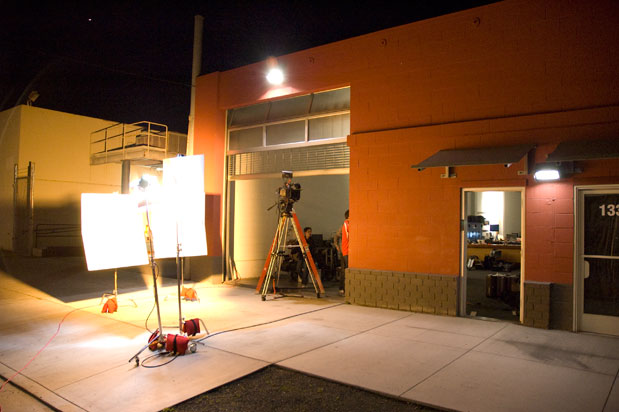 The idea was that the Kinos would provide some nice modeling from within the shot and light the area around the “club exterior”, while the warm Par provided a smooth base fill. (Soft fill light placed near the camera makes a lot of things look good in a hurry.) As people came closer to the camera the Kinos dropped off and the warm Par become a very pretty frontal key. As we were going to be shooting multiple passes for visual effects I wanted to light once and have that setup work for everything–not easy to do, but in this case hiding the Kinos nearly in plain sight worked perfectly.

The Kino Flos were eggcrated not so much to direct light but to cut down spill to the sides. The people on the sidewalk were much closer to the Kinos than the car was, and the light level on the car determined the exposure, so the eggcrates helped cut side spill onto the people and kept them from overexposing unless they stepped directly in front of the light. 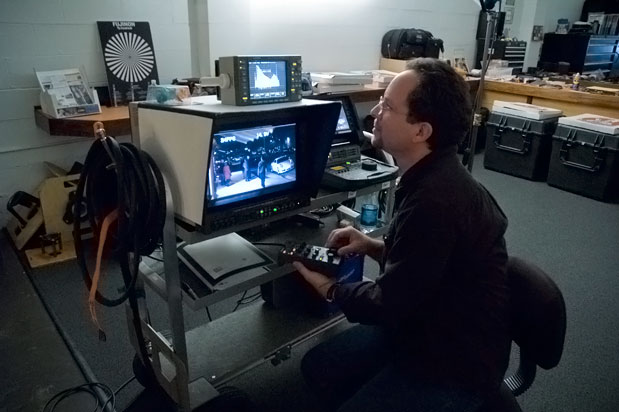 Once the lighting was in place, thanks to Alan and Rod’s help, I turned to Louis to save me. We ended up pushing the F35’s gain to +6db and bringing up both the black stretch and the gammas to open up the shadows. We also changed the shutter to 216 degrees, or 1/40th/second, a mode I use quite often as this gives me an extra 1/3 stop or so and is a rock-solid flicker-free shutter angle. Boosting the gamma, black stretch and gain added a fair bit of noise to the image but it wasn’t a horrible amount, and we knew this spot would only ever appear on the small screen. (Ian is cutting the spot and he plans to work on the noise a bit in post.) Given the choice between a poorly lit scene with adequate exposure or a beautifully lit scene with a bit of underexposure, we opted for beauty and a little bit of noise. 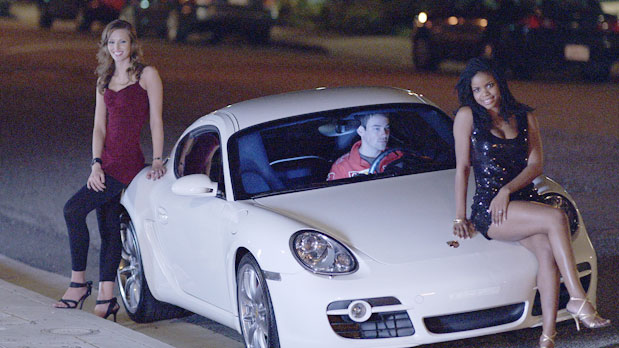 The blacks and gammas have been boosted in this frame to show the noise that was lurking in the shadows.

We shot in standard gamma as the scene was fairly low contrast. Our shooting stop was T2, and the EI reading on the side of the camera said something like 650 or 670. When I went out to take an incident reading of the car with my meter set at ASA 640, I read T1 2/3 toward the Kino Flos and “E” toward the big bounce by the camera. The action looked much brighter on the monitor than it did to my eye. Just for kicks I changed the ASA rating on my meter, stored a couple of measurements and showed them to Louis and Rod while holding my finger over the ASA readout. I showed them T2.8 1/2 toward the Kinos and T1 1/3 toward the fill… and then moved my finger to show them that I’d set the meter’s ASA to 3200. They were impressed.

Now on to the shoot itself…

After our first rehearsal it became clear that we needed to hide a light in the car itself. Alan Hereford offered a battery powered LED light that he’d picked up at Walmart as an experiment. It was the perfect color to emulate the cool blue/purple light one sees in high-end car dashboards. It was a small ring light, and we hung it off C-47’s attached to the heating vents on the dashboard. It ran off four AA batteries. 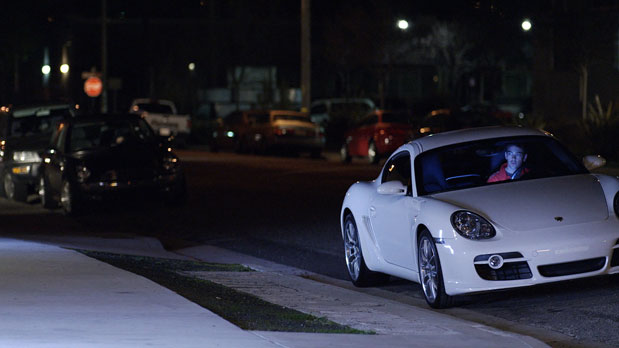 ‘
Alan Hereford’s LED ring light adds a high-tech glow to the interior of the Porsche. The stop sign in the background is lit by the 1k open-face hidden behind the building and will be removed in post. Notice that the two street lights to the left of the stop sign show vertical smears: that’s an artifact of the F35’s striped-sensor technology and reminds me of a vertical anamorphic flare.

The first shot was a close-up of three people being dragged to the car. We shot the two women separately because they didn’t overlap (they would be separated into different elements later), and then shot the guy separately. We did a number of passes: first they just sat there, then they stood up and sat down abruptly, and then they pushed themselves away from the car. All these elements would be sped up, blurred, and occasionally reversed in order to create one shot where they were dragged to the car as if by a magnet. 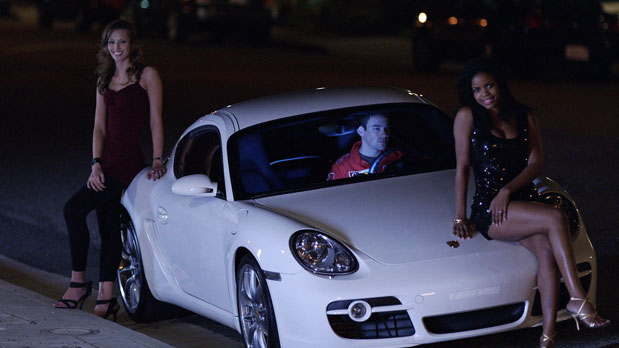 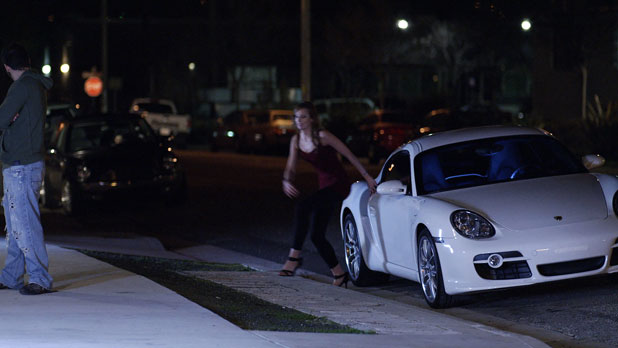 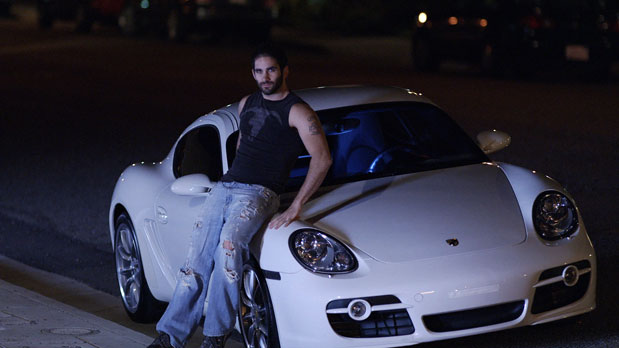 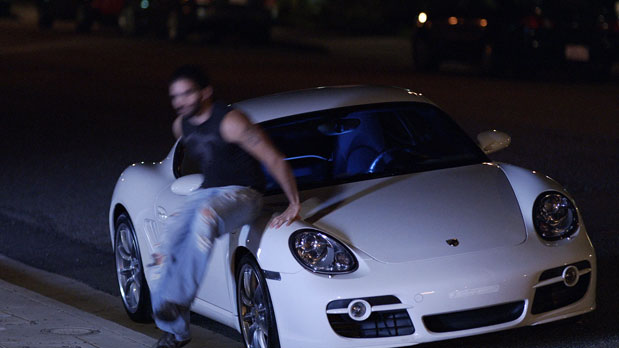 We ran into a little bit of a problem in post: as we were shooting the guy’s plate the one overhead building light that we couldn’t reach shut down, apparently due to a headlight hitting a daylight sensor. For a short time we were afraid we’d have to shoot all the women’s plates again in order to match the new lighting. Fortunately the building light re-ignited within a minute or two but took a while coming up to speed, and as we were pressed for time we shot as soon as the color of the light looked stable. In post we found out it wasn’t quite up to speed yet, and there was a slight color shift that was visible on the white hood of the car. If it wasn’t for our white car we never would have noticed the difference. That plate will require a small amount of color correction to make it match the others.

This is why, when doing multiple passes on a scene for VFX work, it’s good to control every light in and around the shot–assuming, of course, that you have a budget that can buy you the manpower and tools to do so.

After that we shot a master of the car pulling up and repeated a number of elements of our three main talent being dragged to the car. And after that we lowered the camera and shot another angle of the same actions again. 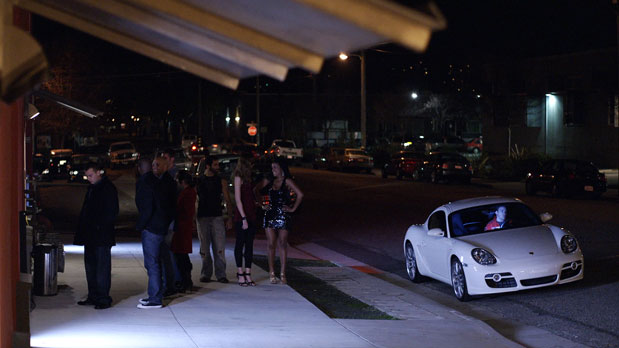 Hidden in plain sight: That black object you see tucked against the wall in the bottom left of frame is one of our Kino Flos. No one will ever know what it is.

Last but not least we shot the end shot, or the punch line of the spot. 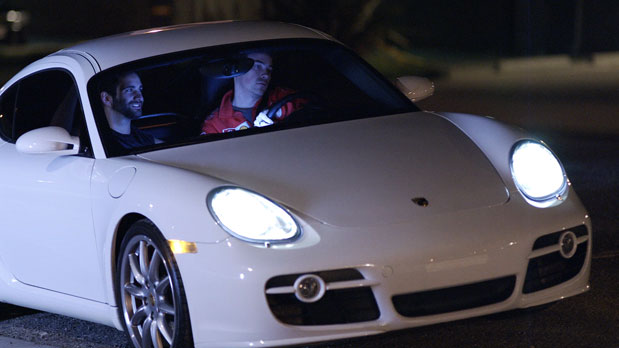 We started setting up in daylight, around 5pm, and started shooting around 7:30. We were finished by 11:30, thanks to a little help from my friends and co-workers.

Berkeley police drove past us five times while we were shooting, and I was fairly sure we were going to get busted for shooting on the sidewalk without a permit or aiming bright lights into the street. They never bothered us. On my way home I drove around the block and discovered that there was an actual club (as opposed to our fake club) on the next street over, and that was what the cops were watching. It was only through great force of will that I drove around, and not over, the hundred or more people who had spontaneously decided that 8th Street was their living room.

We recorded all the footage via HD-SDI to a Panasonic HPM-110 P2 deck, using the AVC-Intra codec. The spot is currently in post and I hope to be able to show you the finished piece in a week’s time.

While I shot a couple of behind-the-scenes photos for this article, the majority were shot by Rod Williams. Thanks, Rod!