Dear Apple’s iTunes Podcasting Team:
We love podcasting, and we love the fact that Apple’s iTunes has helped to facilitate the growth of this relatively new medium since 2005 with iTunes 4.9. Congratulations on releasing iTunes 10 now, in 2010. This letter is to point out three key areas where you need to improve the user experience of podcast subscription and commenting, especially with regard to podcasting in worldwide markets and with its use with mobile devices, and in some cases where some of your competitors (i.e. Google/Android and RIM/Blackberry) already offer podcast subscription apps which are much more user-friendly than the current iTunes podcasting experience. Oh, and of course, there will be one more thing!

One of the most important benefits of podcasting is the subscription via RSS, which automatically receives the latest episodes of podcasts, without any further user intervention. Fortunately, you (the Apple iTunes Podcasting Team) recognized that benefit back in 2005 with iTunes 4.9. However, the version of iTunes that currently runs on Apple’s handheld mobile devices still can’t subscribe to podcasts directly. Users of Apple’s handheld mobile devices who want to subscribe to podcasts still have to do so on a traditional Mac or Windows computer, and then frequently sync the handheld mobile device with a computer in order to get the latest episodes. This is way too complex for non-geeks, and too time consuming for geeks. Apple’s chief competitors in the handheld mobile device market have already beaten the iTunes mobile podcasting reception experience: Google/Android devices have a free app called Google Listen which subscribes to podcasts over the air, and RIM/Blackberry now has released its free Blackberry Podcast App. Both apps are downloadable OTA (over the air), without syncing to any computer. In fact, the Blackberry Podcast App is included with BlackberryOS 6, so any Blackberry running OS 6 won’t even have to download the Podcast App since it will already be there.

We understand that you need to segregate the iTunes sections where you sell or rent content, since your contracts with the content owners want to segregate their distribution. However, the podcast section of iTunes by your own rules is only for free podcasts. I am glad that you recently expanded the iTunes Store to more countries, and that now all podcasts are available in all iTunes Stores. However, I can’t understand why you continue to segregate the comments about podcasts by country. Currently, I produce two podcasts which are listed in iTunes. We have a worldwide audience in multiple countries. However, the comments given in one country are not visible in the iTunes Store in another country. Other colleagues have complained about the same segregation in their own podcasts.

3) Please correct your linguistic nomenclature inconsistency within the iTunes program

As stated previously, I currently produce two podcasts, both of which are listed in iTunes. One is in English, and the other is in Castilian, although in the iTunes listing for the Castilian podcast, the iTunes system unfortunately categorizes it as “Spanish” when displayed in a English language system, or “Español” in a Castilian-based system. The reasons why it should be categorized as “Castilian” in an English-language system or “castellano” in a Castilian-language system is explained in the sidebar below, which I borrowed from one of my own recently published articles in ProVideo Coalition magazine. Ironically, this issue is even inconsistent within the iTunes program, as I will show you after the sidebar.

Sidebar: Why the language must be properly called Castilian, not “Spanish”

Unfortunately, many people mistakenly think that the most widely spoken language in Spain and Latin America should be called “Spanish”. There are historical reasons for this mistake, and the main culprit was the ex-Spanish dictator, Francisco Franco (1892-1975). The fact is that there are several officially-recognized languages spoken in Spain, including Castilian, Catalán, Euskera (Basque), and Galician. Franco’s mission (which fortunately failed) was to wipe out all languages spoken in Spain except for Castilian, and call the remaining language “Spanish”. Franco even sent his soldiers to Catalonia with the mission to burn all books printed in Catalán in bonfires in the streets. Fortunately, they didn’t find all of those books! After Franco’s fall, the new Spanish Constitution corrected that cruel act by making several clear statements in Article 3:

Fortunately, many of the other Spanish languages continue to thrive to this day, with podcasts, radio and TV stations, current books, and daily newspapers in many of them. It is both inaccurate and degrading to call the Castilian language “Spanish”. It would be as crazy as calling the English language “United Kingdomish”, or -in the era of the Soviet Union- like a Russian saying “I speak Soviet”. In the United Kingdom, speakers of Cornish, Gaelic, Irish, Scots, Scottish, Ulster, or Welsh would be quite offended if people from London said: “I speak UK-ish”.

The Constitutions of many Latin American countries -including Colombia, Perú, and Venezuela- also properly state that the official language of the country is Castilian. Although M©xico’s Constitution doesn’t mention an official language, the ex-Mexican President Vicente Fox has been quoted as saying: “With Castilian, we can cross 20 international borders without losing the message”. ¡Bravo, don Vicente! 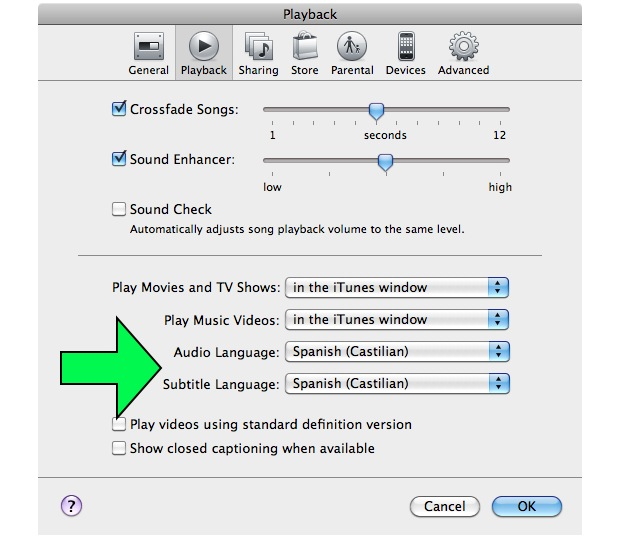 As indicated above via the green arrow, iTunes properly recognizes the term Castilian in its preference tab (in an English-language system). Now it just needs to do the right thing in its podcast listings too! 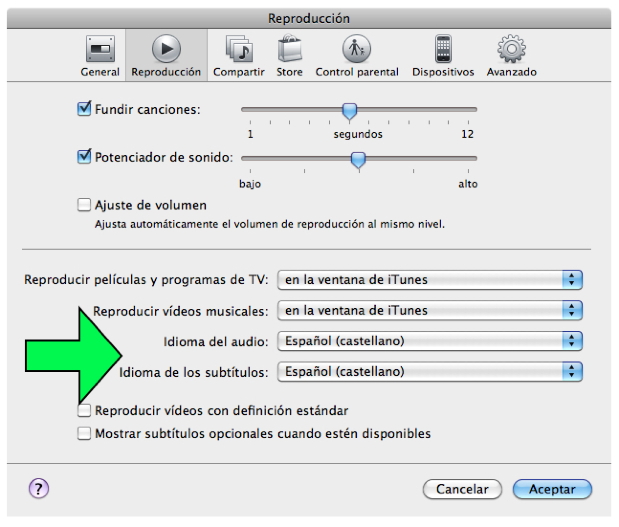 I still remember the slogan Apple used to promote the unexpected release of iTunes for Windows in 2003. Apple’s official slogan was: “Hell froze over!”. The reason that Apple used that phrase (which is normally used to indicate a very unlikely event) was to underline how unexpected it was for Apple to develop iTunes for a competitor’s platform. Now, my request to Apple is: “Please make Hell freeze over again!” by developing and releasing iTunes (beefed up with the three points stated above) for Android and Blackberry too.

Neither Apple, Google, or RIM is paying Allan T©pper or TecnoTur LLC specifically to write this article. Some of the manufacturers listed above have contracted T©pper and/or TecnoTur LLC to carry out consulting and/or translations/localizations/transcreations. So far, none of the manufacturers listed above is/are sponsors of the TecnoTur programs, although they are welcome to do so, and some are, may be (or may have been) sponsors of ProVideo Coalition magazine. Some links to third parties listed in this article and/or on this web page may indirectly benefit TecnoTur LLC via affiliate programs.