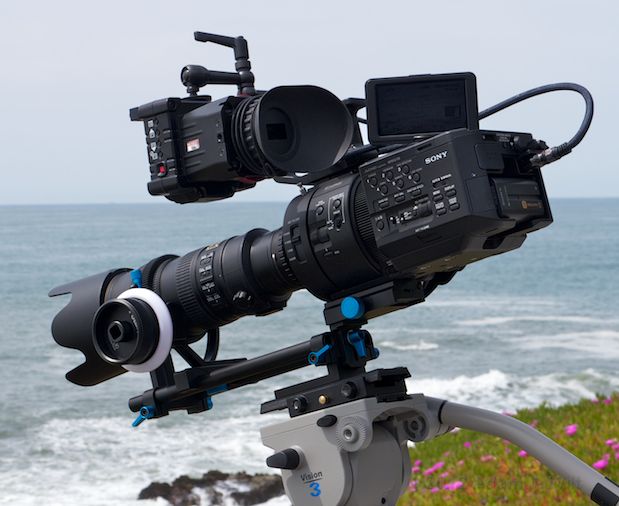 Last week, Sony announced the NEX-FS700, a super-slo-mo follow on to the NEX-FS100. On Saturday, a pre-production FS700 arrived on my doorstep. On Sunday, I went to the coast to try it out; I offer a small sampler of the results for your delectation.

• A good first look from Frank Glencairn. He hits all the major bullet points, so I don’t have to (grin).

• Andy Shipsides at Abel Cine has his own first look (though the video wasn’t loading when I tried it), and a 480 fps water-ballon burst on Vimeo (with a tip o’ the hat to SonyAlphaRumors for that link).

• The new top handle is made of solid metal and mounted with two LONG 1/4″ screws. It’s rock-solid and confidence-inspiring.

• At least in Super Slo-Mo mode, the pre-production camera eats batteries: I went through both the stock NP-F770 and an NP-F950 in the course of two hours. The FS700 with a 770 is rated for 5 hours and 40 minutes of continuous recording time at 1080/24p, so either the pre-pro camera is unusually hungry, or running Super Slo-Mo in “end-trigger” mode (where the camera is constantly capturing into a buffer, and writing out the contents to storage when you hit the record button) is especially taxing.

• The side handle now attaches with a user-friendly T-handled screw, and is held in position by an Arri rosette; it’s far easier to adjust on the fly than the one on the FS100.

It’s also considerably further off-center than the one on the FS100, due to the width of the ND filter wheel.

• In use, the camera captures slo-mo to a buffer, then writes to SD card at about 60fps. During the writing, you can press a button to cancel recording; what’s been written so far remains on the card.

As to my test: 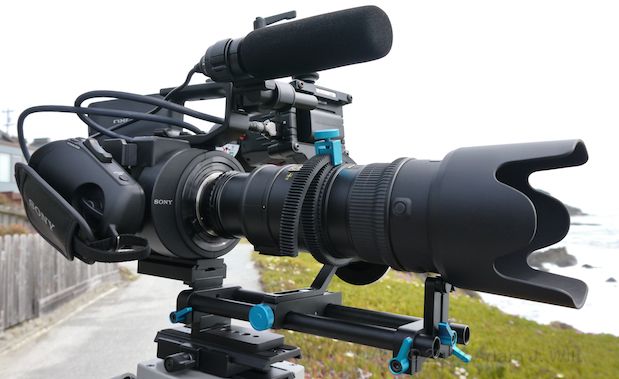 480 line-skips a fair amount (and appears, on the charts, to pixel-skip as well, though that might simply be an artifact of different demosaicing in slo-mo); 960fps further decimates the vertical resolution and windows down to half-width on the sensor, too. You’ll see increased noise in the 480 and 960 fps clips as a result, though Sony cautions me that the multi-layer circuit boards still need to be optimized to reduce crosstalk: this camera is a “fairly good, stable, underperforming engineering sample”, and shipping versions may well yield cleaner images.

Note that there’s glittery water in puddles on the rocks, so don’t misinterpret every twinkle and flicker as a sampling issue! But at 960fps, yes, you’ll see twinkling of fine detail due to line-skipping.

And yes, there is a focus-pull in the first shot: into focus, then out, then in again.

Disclosure: Sony shipped me a pre-production NEX-FS700, which I’ll return to Sony at NAB.

I own the Nikon 70-200mm f/2.8 VR lens and all the ancillary kit attached to the camera for this test.