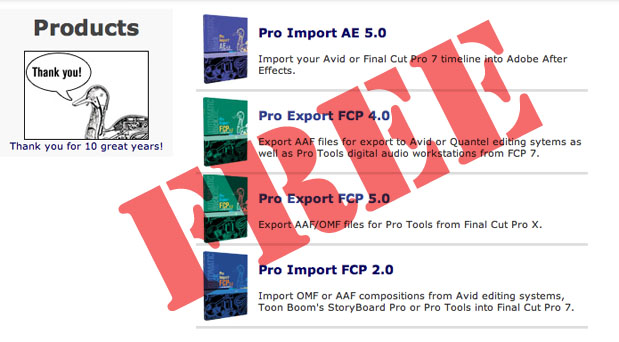 It was just over a month ago that the post-production community was surprised by the news that the perennial workflow / transfer tools from Automatic Duck were suddenly gone. If you’ve been under a rock get up to speed on that news here and here. Another bombshell dropped Friday night when news broke that all those legacy Auto Duck products are now available for free.

There’s a Thank You page on the Auto Duck website that talks about this move. The highlight paragraph is this:

Because we are so busy with these new projects we cannot provide the same level of support for our plug-ins that we used to, therefore we can’t in good conscience charge money for them. But we don’t want our popular tools to go unused if they are still useful to people. Therefore we have decided to make them available at no charge. Enjoy!

Kudos to Wes Plate and his father Harry for making this decision. It’s no surprise that the Adobe work probably has them busy enough that they can’t continue the level of support that Automatic Duck customers have been accustomed to. But rather than kill of the products entirely (which is what Apple would have done with them) they will live on and be useful to many. We won’t see them developed further as Media Composer, After Effects and FCPX improve so there may come a day when they won’t work anymore but they’ll continue to be useful tools for quite a while.

There will undoubtedly be a sour taste in some people’s mouths as there will be those who paid full price for Auto Duck products just over a month ago but such is the march of technology as there’s always going to be that cutoff point. But Automatic Duck tools are the type of tools that people bought when they really needed them. They were expensive enough that their purchase was most likely well planned so if you did pay money for your Auto Duck product you probably got your money’s worth.

I’m looking forward to see what the Automatic Duck folks bring to Adobe. I’ll miss their booth in the plug-in pavilion at NAB as well as the metal duck keychains (unless they’re still there in 2012 that is). It’s too bad the Automatic Duck forum isn’t still on the Creative Cow as that’d be the natural place for the community to keep Auto Duck supporting going in the future. What ever happened to it anyway? If there was ever a time to bring it back it’d be now.