I’ve had the opportunity to spend a great deal of time with the AKiTiO Thunder2 Quad Mini SSD 4X1TB for about a year now, actually. It’s small enough to pack in my suitcase when I fly or stuff in a gear case when I drive to do training and presentations. I’ve used it for logging 4K media files in the field in the back of my truck, to editing video in my hotel rooms to demoing Adobe workflows in my presentations. The speed of the Thunderbolt2 connectivity and the 4xSSD RAID make this an excellent choice for video production and doing live video demos.

I’ve had the opportunity to spend a great deal of time with the AKiTiO Thunder2 Quad Mini SSD 4X1TB for about a year now, actually. It’s small enough to pack in my suitcase when I fly or stuff in a gear case when I drive to do training and presentations. I’ve used it for logging 4K media files in the field in the back of my truck, to editing video in my hotel rooms to demoing Adobe workflows in my presentations. The speed of the Thunderbolt2 connectivity and the 4xSSD RAID make this an excellent choice for video production and doing live video demos. 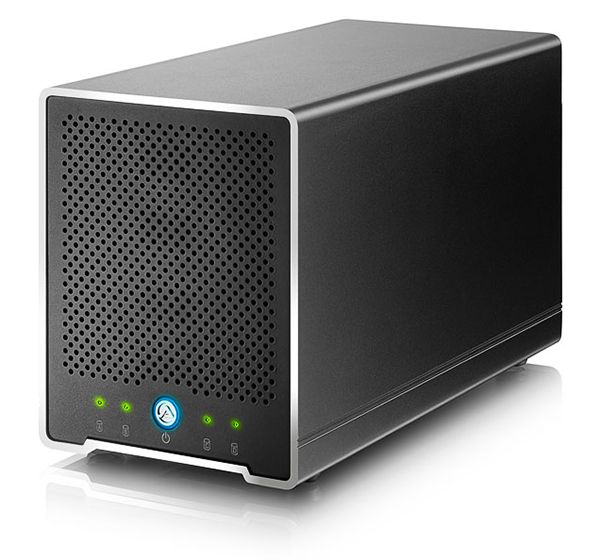 I’ve had plenty of external hard drives in my workflow over the years and thankfully technology just makes them faster, bigger and cheaper. In my current desktop setup, I generally have USB 2&3, FW800 and Thunderbolt 1&2 external hard drives – many are for separate projects and clients. I can get away with much of this, as archaic as it may seems, but it works for about 90% of my regular production workflow.

However, it’s increasingly apparent that I need to step up my game, especially with all the 4K video footage I’m capturing now with my drones and GoPros. Also, since I’m on the road a lot with my MacBook Air doing presentations at conferences and workshops, I need to have a portable solution that not only gives me a great deal of external media storage I can access, but also the ability to split-out my single Thunderbolt port on my machine so the MiniDV output can feed the projector for the audience.

The AKiTiO Thunder2 Quad Mini SSD 4X1TB provides me with both – not only an extra port for the video projection, but with a full 1TB of SSD theough the fast Thunderbolt 2 port, I can have both media and my Adobe Cache accessing the ultra-fast RAID, and deliver live video editing in Adobe Premiere Pro CC or RAM Previews in After Effects CC without preview major choking I might otherwise have with the stock MacBook Air.

But beyond simply presenting and training in live workshops, I’ve found a great benefit to the speed and reliability the AKiTiO Thunder2 Quad Mini has provided me while working at remote client locations as well. All I have to do is who up with my device and log into my Adobe CC account and I have all my media assets, music and other tools available to me – in addition to a super fast Cache folder through the Thunderbolt 2 port. When I leave the client’s site, I have filled up their internal drive with cache and preview files or any other content that I’d rather not leave behind, nor to slow down their machines.

Since I’m often out flying drones these days and capturing a ton of 4K video, I will often take my Toyota FJ along to haul my gear and provide me with an AC inverter that will charge batteries as well as provide AC power for the AKiTiO Thunder2 Quad Mini. I can log and transfer all my media off my MicroSD cards right in the field and preview them with clients and colleagues to see if we need to re-shoot anything. This is a huge benefit for on-location productions! 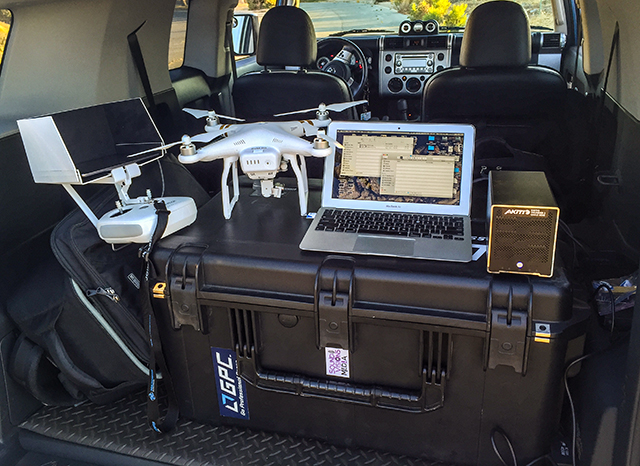 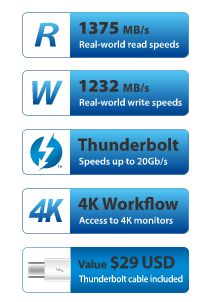 Faster than ever, you can now achieve speeds of up to 1375MB/s with this 4-bay Thunderbolt™ 2 technology storage enclosure. The removable trays allow for easy installation and replacement of the drives. They are designed for 2.5″ SATA 6Gb/s drives, SSDs where speed is the priority and HDDs when it’s important to maximize the storage capacity. An ultra durable aluminum casing provides efficient heat dissipation, plus a large rear fan keeps your drives cool during long hours of operation. 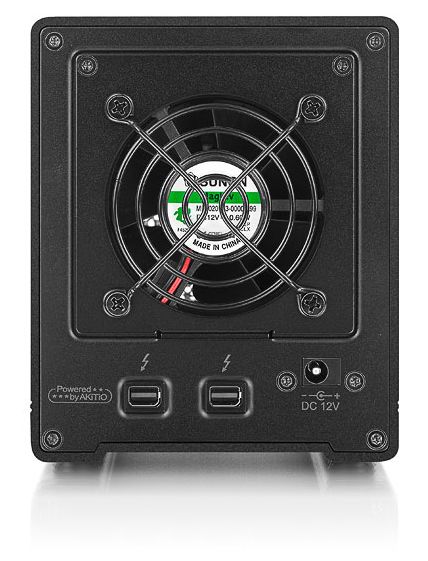 By incorporating the awesome Thunderbolt 2 interface and combining it with four SSD drives in a RAID 0 software RAID, AKiTiO’s Thunder2 Quad Mini is ready to deliver an extremely fast throughput performance of up to 1375MB/s. Even individually, the SATA 6Gb/s interface allows each drive to run at full SATA-III speeds. The second Thunderbolt 2 port lets you daisy chain up to five Thunderbolt devices together. For example, you can attach additional external drives and even a display all connected to your computer through a single cable. Thunderbolt 2 technology incorporates DisplayPort 1.2 support, which allows for video streaming to a single 4K video monitor. If you are a video editor, you can now use a single port to connect your external storage drives and a 4K display.

With the free AKiTiO Data Multiplier application, backing up and duplicating files is faster than ever. In fact, it’s about 34% faster when compared to manually copying and pasting the files. Designed with video editors and data imaging technicians in mind, the application requires only a few clicks to simultaneously copy the files from one drive and duplicate them onto up to three other drives. 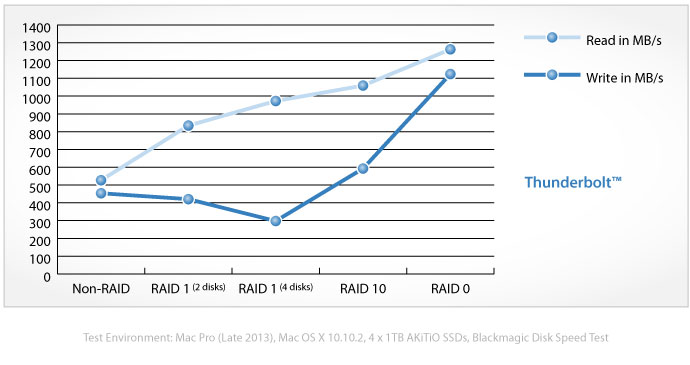 The maximum real world performance of this Thunderbolt 2 product is about 1375 MB/s. To reach these kind of speeds with the AKiTiO Thunder2 Quad Mini, four SSDs that are combined in a RAID 0 system (Apple Software RAID) are required. Individually (see Non-RAID), each drive can run at full SATA 6Gb/s speeds.

You can purchase any of these AKiTiO Thunder2 Quad Mini configurations directly from Amazon here: http://www.amazon.com/dp/B00VJ4IWVU/