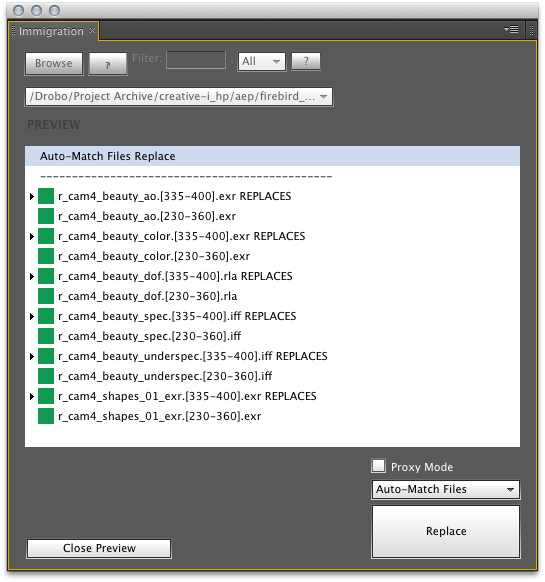 Ask any veteran After Effects artist who uses scripts which ones should really be built right into the application and among the top handful for most artists will be Immigration. It provides an interface to work with image sequences, something that the file system (Finder or Windows Explorer) and Adobe applications which rely on it (all of them) doesn’t do well.

If you’re not in the habit of rendering images sequences, as do most high-end professional facilities, the reason is probably that they’re harder to deal with than QuickTime movies. But image sequences have some big advantages over QuickTime. One corrupt frame doesn’t sink the whole sequence. A section of frames can be replaced without any further (painstaking) editorial steps. And the file formats are portable to any system, with no unpleasant surprises that a codec isn’t installed or supported.

The biggest downside, besides the fact that you can’t simply double click a sequence to open and play it (although there are applications such as Framecycler that are almost that simple) is that you must manage hundreds and thousands of files instead of one, or a handful. Every video compositing application seems to offer its own method to recognize a sequence as a single clip, but in After Effects, the Import dialog sees a list of individual files, even if you tell it that the files constitute an image sequence. Worst of all in After Effects is to have several long image sequences in a single folder.

No, wait, even worse than that is to then get a new version of that same folder and attempt to replace each sequence. You can easily lose half an hour of your time on earth to that.

Enter Immigration. This UI panel lets you navigate to a source folder without using the import dialog, and recognizes each unique sequence. But its features are so much more than that, it’s difficult to do them justice. These include :

But even without these, the sheer time savings just to scan the contents of a folder with thousands of files in seconds instead of minutes.

The 2 week free trial on this $39.95 script allows you to decide for yourself whether Immigration pays for itself by doing, in a major way, what the best scripts do; save you time while extending what is possible.