Welcome back to some recent news on After Effects. The media landscape for AE hasn’t changed much too much in recent years, even through the 2020 pandemic and political circuses — if you don’t count the absence of user groups and conferences or sudden streaming of events!

We’re well beyond just forums, magazines, VHS tapes, authoritative books, DVD sets, plug-in vendor stars, and other tutorial superstars. Some of the older channels and venues still exist of course, but beyond the noise of the social media information explosion, it seems the perhaps only the online schools are more dominant. After Effects news roundups will have to restart at the beginning, looking for the fresh, so trend spotting and comparisons of methods may be slower in coming.

If you haven’t already, slide into the slipstream of the After Effects news with a long rundown from a School of Motion audio podcast on The Year in MoGraph – 2020, with Joey Korenman, EJ Hassenfratz, and Ryan Summer. It’s quite detailed and wide-ranging, with lots of linked references.

If you want just a taste, and something quicker if less broad, check out Best Motion Design & Animation of 2020! End of Year Awards by Ben Marriott. 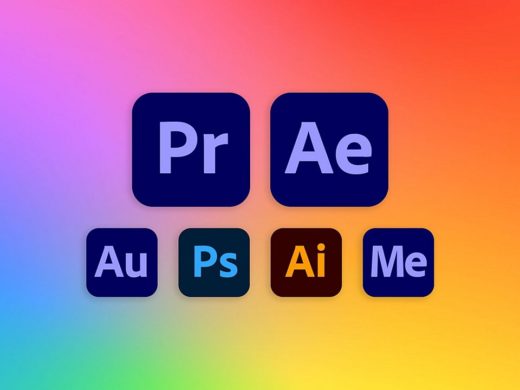 Adobe CC Video 2021 releases here on PVC lists new features released in March, and videos and links to additional resources. If you’re often playing catchup, like me, Adobe keeps up-to-date details and links to previous new info at What’s New in After Effects, and there are similar pages for every product

Just after that article was posted, DavTechTable, by Adobe’s Dave Helmly, posted some videos on hardware support, as well as how the Adobe video apps work. See Chapter 1: HW System Specs for Premiere Pro and After Effects (1 of 5 videos) and Chapters 5&6: Adobe After Effects Performance Basics – Quick Tips for AE, both of which very dryly explain details. Also available is VIDEO MASTERCLASS | Newly-Released Features in Premiere Pro and After Effects! from Adobe:

Keeping on the topic of performance, Mathias Möhl of @mamoworld noted a Super Quick Tip – Speed Up Your Renders in Premiere Pro! by Thomas Rebour (below). On a slightly more serious note, Plugin Everything created a plug-in that might cause insecurity, AE Benchmark – FREE Hardware Comparison Tools For After Effects!

It’s not just about hardware — wetware and software is important too. Plug-n-telligence Compatibility After Effects, “coming soon” from Exposure on AEscripts.com, is a “paradigm-shifting new tool that always knows exactly which plugin you want to use!” Not sure how I missed this one after “Enhance” became an actual thing.

Here on PVC, Chris Zwar posted part 16 of a long-running series on After Effects and performance, After Effects & Performance. Part 16: A few bits and bobs. It’s well worth the time for serious users, even if things are about to change in how After Effects works on a basic level. In Chatting about After Effects Multi-Frame Rendering with Adobe Dev. Sean Jenkin, Pugets Systems teases details on MFR (now available in the public beta, links) from an engineering manager on the Adobe After Effects team. It’s a complicated feature a long time coming, but the pay-off is big and development seems to proceeding at a good pace. 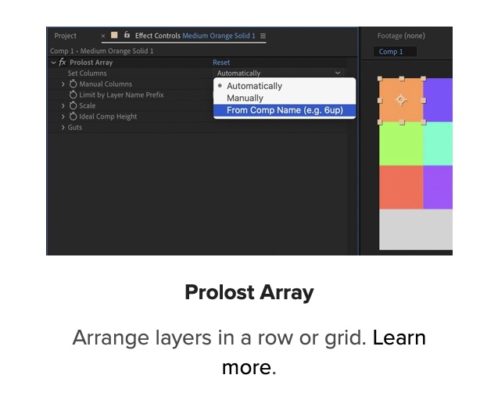 Stu Maschwitz has a bunch of free stuff available on his Prolost website. Recently updated is Prolost EDC Presets, a “pay what you like, if you like” set of 48 presets for After Effects. EDC is “everyday carry” stuff and these are “simple” shortcuts to common settings, better defaults for often-used effects, or better interfaces for favorite expressions.

Over on his blog Stu talks about the ever topical issue of what is whiteness. In Apple’s “EDR” Brings High Dynamic Range to Non-HDR Displays, Stu explains that with Mac OS Catalina, Apple quietly changed what “white” means for millions of Macs (and none of us noticed). He touches on what Apple calls EDR, or Extended Dynamic Range, as well as EDR ramp-up. Congratulations if you actually understand this stuff on the first pass! On a more basic level, a still common refrain on internet forums is that exports don’t match the look in applications, and Oliver Peters has some answers in Trusting Apple Displays? at ProVideo Coalition.

Along with some unfortunate adjustments at Maxon (new owner of Red Giant), there were some big updates to Magic Bullet and Trapcode Suites. See some details in Stu’s Magic Bullet Suite 14 and Trapcode Suite 16; there’s also a bunch of newer videos explaining all the new stuff, as well as new Maxon branding. Meanwhile here’s a still relevant What’s New in Trapcode Particular 5:

The open market for digital art, music, and even tweets has exploded in 2021 due to the rise of digital assets being recorded in decentralized public transaction ledgers using strong cryptography. Unique proof of ownership is provided by an NFT, or “non-fungible token.” In March, an NFT of an art asset by local hero Beeple (Mike Winkelmann) sold for $69 million in a Christie’s auction — but how long will the irrational exuberance last?

You can explore the attractively avaricious boom with a few resources below, if you haven’t already. By the way, according to Decrypt, Beeple Immediately Converted His $53 Million NFT Earnings From ETH to USD (The artist who sold an NFT artwork for $69 million says NFTs are “absolutely” a bubble). Motion by Nick provided a decent intro to NFTs, Crypto Art & NFTs Explained:

Motion by Nick refers to a few interesting resources, like The complete guide to answering: You cannot hang CryptoArt on your wall, why do you buy it? at Superrare.co, and to a School of Motion podcast, Crypto Art: Fame and Fortune – Mike “Beeple” Winkelmann.

Just as good, among the oodles of competing articles and videos, is How Beeple Crashed the Art World by Kyle Chayka in The New Yorker,  and Beeple Explains The Absurdity Of NFTs | So Expensive, a video from Business Insider below.

ukramedia  remains quite active. A recent tutorial, on media replacement, is This New MoGrt Feature Is a Game Changer!

Bring Your Own Laptop created Free After Effects Course – Beginner Infographics & Data Visualisation, designed for but not limited to new AE users. It’s inexpensive and has a money back guarantee. But there’s a lot of free tutorials already out there, and you can consult an old AEP roundup on the subject if you’re interested, Charts and graphs in After Effects.

ECAbrams helps you create Reacting Grids in Adobe After Effects. He looks at several methods to achieve this effect, first with built-in effects and expressions. Then he talks a bit about 3rd party plug-ins, and has a look at layer maps and particle systems. Lastly he discusses how the built-in Cinema 4d Lite can help. 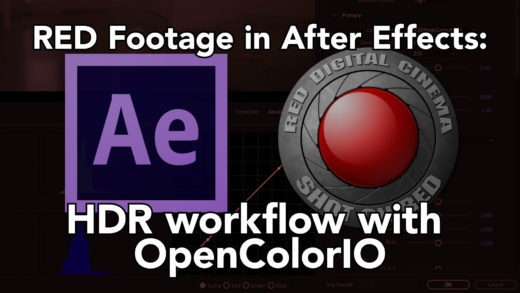 Using RED files in HDR After Effects Projects by Chris Zwar has a video that demonstrates the OpenColorIO plug-in, a free open-source effect for After Effects recently updated by fnord software.

Mark Christiansen is tutoring at a variety of venues, including Lynda.com. VFX for Motion at School of Motion is a class by Mark that will teach you the art and science of compositing for motion design, strengthening skills in keying, roto, motion tracking, matchmoving, and more. You could cobble together a similar but cheaper approach (especially if you use his old VFX for After Effects book), but you won’t get recent best practices or interaction with professionals. Here’s a sample from the class (with assets), How to Use Mocha for Tracking and Clean up After Effects – Tips from a Professional VFX Artist:

In AtomX: The Ultimate Pack Manager for After Effects & Premiere?, Creative Dojo reviews the AtomX extension for After Effects, Premiere, Photoshop, and Illustrator. AtomX is a plug-in manager that hosts many resource packs from various designers; it includes design elements, transitions, sounds, and more.

Plugin Everything, known primarily for creating plug-ins (see AutoFill), shared 5 BEST FREE Plugins For After Effects You Need In 2021! While we’re doing this, you might as well peak at another favorites set chosen by Ben Marriott, Top 5 Free After Effects Plugins for Animation/Motion Design. Boone Loves Video added his own choices for 14 FREE After Effects PLUGINS to Use in 2021.