Here's more of the last 3 weeks or so of assorted After Effects tutorials, tips, and scripts & plug-ins new and old.

Motion Boutique released Newton 2, the new version of the physics engine plug-in for After Effects. “Newton interprets 2D composition layers as rigid bodies interacting in a real environment. Newton provides many simulation controllers such as body properties (type, density, friction, bounciness, velocity, etc), global properties (gravity, solver), and allows the creation of joints between bodies. Once simulation is completed, animation is recreated in After Effects with standard keyframes.” New Features in v2 include :

Lloyd Alvarez made a quickstart tutorial for the launch, and Ryan Boyle has another intro, with a supporting AE project file in Introduction to the New Features in Newton 2.

The Kerner Optical VFX Daily (a time-sensitive paper.li thing) has a plethora of links on the VFX industry malaise, which most likey will spread.

Here's a few of the better articles on the issue:

Chris and Trish Meyer posted After Effects Apprentice Free Video: Adding 3D Lighting to a Scene, on enhancing a simple scene with the addition of 3D lighting. Below is an older intro video on 3D lighting in AE from the Lighting Tricks in After Effects course.


Improving After Effects, posted by Michael Delaney a few months ago, discusses issues with AE, and points out that the Feature Request page is itself inherently limiting. In addition to Rift and Sorties, Delaney has released KeySmith, a dockable keyframe and property editor panel for After Effects.

Kes Akalaonu wrote on how to Create Render Templates in After Effects at Audio Micro. For more, see AE Help pages Render settings and Output modules and output module settings. Issues expand rapidly beyond explanations of the basic location of the settings; here's the representative After Effects Render Tips from FeltTips:

Felt Tips posted Building a bar chart controlled by a text layer – After Effects Expression Tip, an 18-minute quicktip showing how to use a text layer in AE to control a simple bar chart. “This could act as the basis for a more complicated set up. The core of the expression is parsing the contents of the text layer as Javascript code, and using a series of indexed layers to respond to changes to the text layer.”

In Creating 3D Graphs in After Effects, Joe Mason writes about some methods for jazzing up boring data filled video presentations, “giving 2D graphs new life in 3D space. Joe walks through the concept, demonstrating how he quickly cranks out fancy 3D charts.”


Joe Lilli had a Quick Tip – After Effects Force Quit and Save, on saving a project file when AE is frozen in the beachball of death. Earlier, Scott Garner posted AE Suicide, “a little script and app that can help force an autosave when After Effects CS4 or CS5 locks up” on the Mac. It seems to be the same as something by Erwin Santacruz, ToeJam v.5, the “tiny Cocoa app that forces After Effects to crash and save your current working file.” Also, Paul Conigliaro posted Kill AE, an extension for Alfred app users on OS X.

These utilities are shortcuts for the technique outlined by Mark Christiansen for a Mac OS Terminal kill of the frozen After Effects process in his AE tips series on PVC. The PDF: Chapter 4 Optimize Projects from Adobe After Effects CS6 Visual Effects and Compositing Studio Techniques extends the advice, so you can have fewer like episodes. And of course, activating the Auto-Save preference is wise. See also qp Version Snapshot, which assists with backup and restore of After Effects projects. Here's Joe Lilli:

Note: There's no PC equivalent, but Greg Balint on the AE-List said:

Remember the PID from that one… Then go to the start menu, type CMD and press enter.. that'll open the command prompt. Then type this:

Doing this without having a hangup will cause AE to think you are quitting and ask you to save your project if it isn't saved… Not sure how it will respond if AE is in a frozen / hung-up state. but it's worth a try if it happens.

Angie Taylor's After Effects Tip: “Isolate a property group from the Effect Control Panel in Timeline by double-clicking Property Group name in ECW” reminds us to review the nooks and crannies of AE Help, like Layer properties in the Timeline panel and related keyboard shortcuts.

Another tip from Angie was “Create a Shape Layer, use Offset Paths & Trim Paths from Shape Layer 's 'Add' menu to animate paths – lotsofun!” Note that users can save Shapes as animation presets, and there are hundreds of Shape layer animation presets offered free by Adobe, along with an Overview of shape layers, paths, and vector graphics in After Effects Help. Also, Andrew Devis posted at least 15 recent tutorials on Shape layers, starting with AE Basics 17: Shape Layers Part 1: 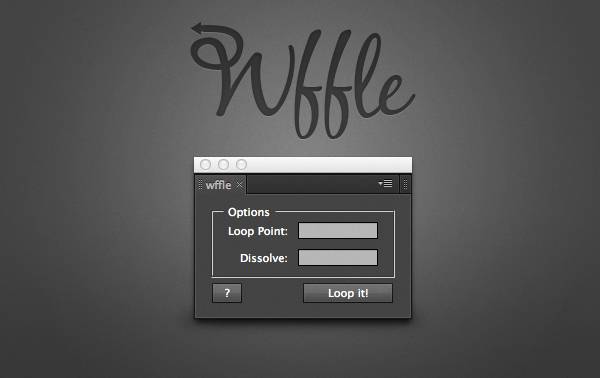 Chris Meyer posted a 2-part intro to expressions in AE a few years ago: Expressions Part 1 and Part 2 – After Effects Apprentice Tutorials. Not long ago Chris Meyer and Trish Meyer finished an update to the subject with an entire video course, After Effects Apprentice 09: Expressions. They also posted a 12-part series on more advanced topics, linked at Deeper Modes of Expression: The Index. For even more, see the Expression Shorts video/text series by David Torno here on PVC.

See also Apply Color LUT effect in AE Help, Apply a look-up table LUT in Adobe Premiere Pro or After Effects CS6 using the LUT buddy by Jean-Pierre La Forest, and After Effects Tutorials – Color Look up Tables with Color Finesse by mchughm1. For a change of pace, but still on LUTs, here's Creating Dailies with SpeedGrade CS6 by Product Manager Patrick Palmer.

Lauren Patterson helps you Getting Started with Animating Vector Assets in After Effects:

Lloyd Alvarez spoke to Navarro Parker about his work with Bradley G Munkowitz (GMUNK) for Skyfall in James Bond Visualized with Plexus. Here's some parts of the work:

Among the interesting projects in Adobe and SIGGRAPH 2012 is PixelTone:

RAWComms discussed Vector Based Video and Death of The Pixel Within 5 Years, on a new vector-based video codec in early development from the University of Bath.