Ten years ago if you were “indie”, you kludged together some fast still prime lenses for your cinema camera package. You’d stick them on your DSLR with the detail dialed way down and shoot away. If you were a “pro”, you’d spend your camera budget renting an F950 and a set of Arri Master Primes. Trusting that your rental insurance would work if you dropped anything.

Then we got a whole bunch of new cheap UHD, MFT to full frame cameras with all kinds of lens mounts. This was followed by a rush of cine lenses to stick on them. It’s an embarrassingly great time to be shopping for cine prime lenses. It doesn’t matter if you have a Micro 4/3rds or an Arri Alexa 65. Or if you’re in the market for spherical or anamorphic lenses. You have more options now than anyone has ever had before in the history of lenses.

Sigma, makers of fine still camera lenses, has entered into this arena in the last year with both Cine Zooms and a remarkable set of very fast Cine Prime lenses. They are called FF High Speed Primes and they cost $3500 to $5000 each. They range in focal length from 14mm at the widest and 135mm at the longest. The 14mm and 135mm are T2, while the lenses in between (20, 24, 35, 50 and 85) are T1.5. You can get them in PL, Sony E, and Canon EF mounts. The Sony E and Canon EF mounts can be swapped with one another by an authorized service center. The PL mount is not switchable.

Absorb all that.
For $25K, you can get a modern, fast, cine prime kit with seven lenses. At T1.5, the only lenses faster are the Arri Master primes at T1.3, and those lenses range in price from 17K to 27K per lens. Put that in perspective, ten years ago, the only option you had for really fast lenses for motion filmmaking were either the really expensive lenses Hollywood uses to shoot movies or put together a kit of SLR lenses built for still photography.
Now you can buy Veydra’s, Zeiss CP’s, Sony Cine Alta, Canon EF Primes, Schneider and the list goes on. Venerable high-end optics maker, Cooke, offers a sub-$10K “Panchro Classic Prime” seeing the obvious market for affordable-ish branded glass.

It is in this context that I present to you a review of Sigma’s Cine FF line of prime lenses. I compare them with the Zeiss CP3 in what I am calling a friendly, collegiate, good-natured camera test. These lenses are not in a competition, one is not better or worse than the other, they are peers. They each have their niche in this new world of middle-priced cinema lenses.
Sigma provided me with three lenses to test with: 24mm, 50mm, and 85mm, all in the PL mount. We put these on the Arri Alexa Mini at Studio B in Berkeley. Rental chief Peter Jackson and camera master Dan Williams did a side by side comparison of these three lenses with the 24mm, 50mm and 85mm Zeiss CP3s from their kit. To make things even, the Sigma’s were stopped down to 2.1 to match the maximum aperture of the Zeiss. I did a quick run and gun of indoor and outdoor daytime shots just to see what it was like to move around with these lenses on the Alexa on my shoulder.
The results aren’t that surprising. These are indeed the best of times for lenses. While there are some differences between the Sigma’s and CP3s, they are small differences when compared to the superb image quality both lenses deliver at a relatively low price.

Why compare to the CP3s?

The short answer is that they are the lenses we have at Studio B, and they are in the same budget range as the Sigmas. Odds are, when you’re shopping for a rental kit or looking to invest in glass, and you don’t have Cooke or Arri Master Prime money, you’re going to be looking at Sigma FF’s and Zeiss CP3’s.

What’s Special About the Sigmas?

When you pop open the Pelican case, the first thing that hits you is the size. The Sigmas are big lenses. Made of metal with giant pieces of telescope-sized optics, they are heavy in your hand. Also, the glass is not buried inside the housing like on the CP3s or the Sony Cine Altas. Sigma did not have to bulk up the housing to supersize the lens to “cine” dimensions. They built the housing around the optics, not the other way around.
This also adds weight, a substantial amount of weight. Each lens is roughly double the weight of its CP3 comrade. If you are looking at flying this around on a gimbal, then you’re going to need a pretty big gimbal.
If you’re looking for an impressive looking professional lens (because honestly clients really do care about size), then these are the lenses you can show off like a Tesla Model X.
It’s not all looks, the added size of the glass (compared to CP3s) is necessary for light gathering. You’re not going to get to f1.5 without large, advanced optical elements. And this is that single, enormous difference between the Sigma’s and the Zeiss and really every other lens priced under 17K. You buy the FF High Speed Primes because you need to shoot at f1.5. You need speed and quality and you need it from the glass.
We tested in a studio on an Alexa set to ISO800, and, apples to apples, the lenses were very similar. We found some color differences, the Sigmas produced an ever-so-slightly green cast compared to the CP3s. A color cast easily corrected either in camera or in the color grade.
Both lenses exhibit very little edge to edge distortion. I saw no chromatic aberration or really any other kind of optical “artifacts” that are euphemistically called “character” on vintage lenses. If you are looking for the clean, sharp, distortion free-look of modern cine glass, both lenses deliver that.
Outside in the heat, the added weight of the Sigmas was noticeable but not really a backbreaker, considering I was using an Alexa mini. The only place the added weight of these lenses will be a deal breaker is on gimbal mounts and drones, or any other kind of camera support that has weight restrictions.

What I Didn’t Test, But Wanted To 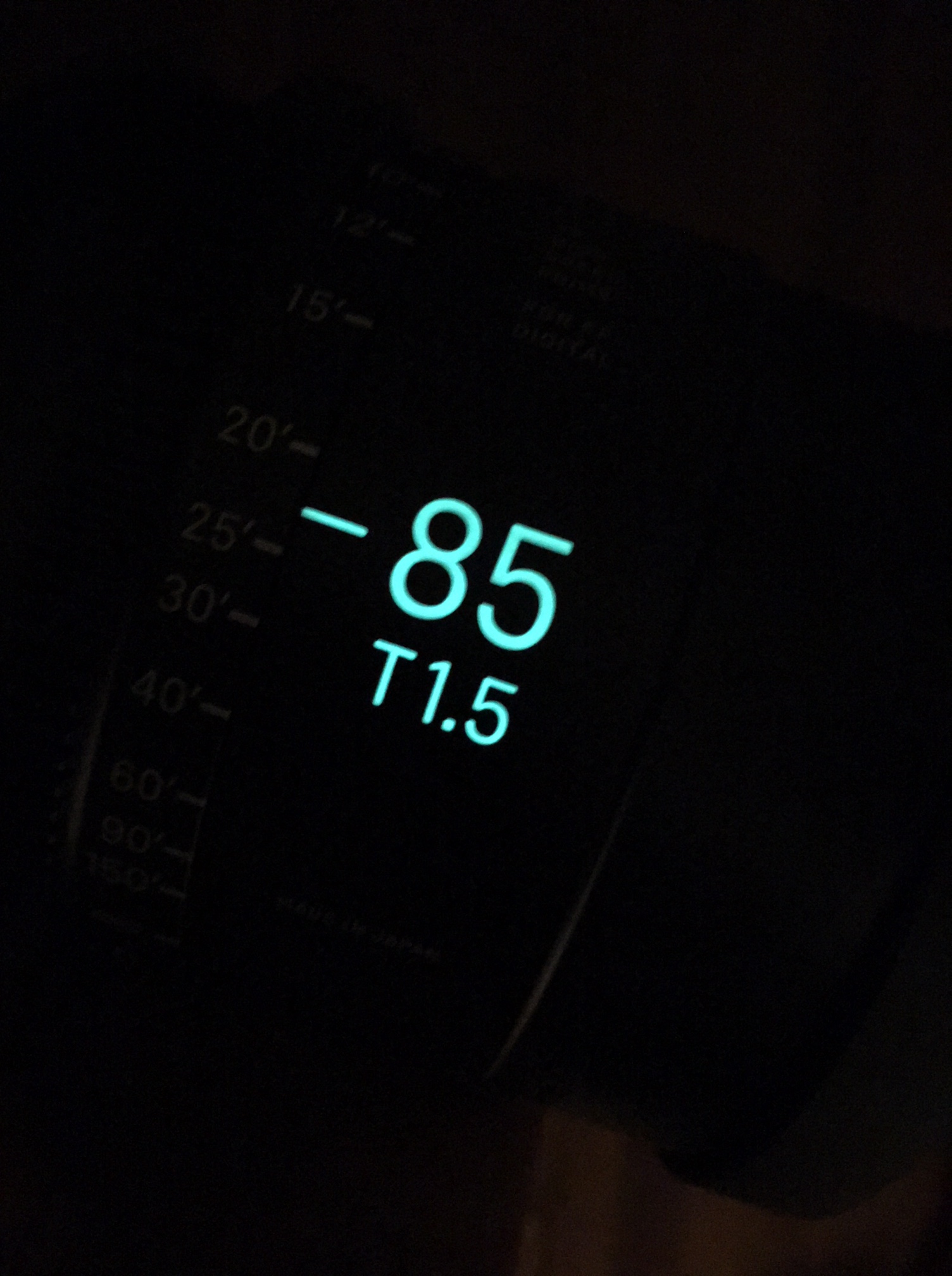 The test I didn’t do but would like to at some point is see how low-light I can go. I’d like to take a set of FF High Speed Primes with the Sony E mount and an A7Sii into the forest and shoot at night by available moonlight. My guess is that there aren’t any cine lenses in this price range that would be able to touch the performance of the Sigmas. An added bonus is that the lens markings on the housings glow in the dark.
You can’t make a wrong choice now. My guess is that I would get similar kinds of results testing with other cine primes priced in the $4-6K range. Modern optics built for the ever-growing number of full frame, UHD sensors, and formats. Each manufacturer will try and stake out a corner of the street. The Sigma FF High Speed Prime is the fastest cine prime lens you can get for under 10 grand. Moreover, you can get it at a fraction of the cost of an Arri Master Prime. If you have a project in need of incredibly fast lenses, with precision optics, machined-like-a-tank build quality, then get these lenses.  If you need a lightweight, compact lens with the option to switch out mounts at home, then get the CP3s.
Both shoot an incredible image. It is the question of where and how you’re shooting that will determine which one to get.

I’ve spent a decade of cobbling together kits of SLR lenses. I’ve de-clicked them, wrapped gear strips around their housings and forced them into service as Cine lenses. Shooting with lenses designed for filmmaking was once an experience reserved for bigger budget projects, but not anymore.  The Sigma FF High Speed Cine Primes offer a set of fast professional cinema lenses at a bargain price that bring an uncompromisingly modern look to any budget.
Support ProVideo Coalition
Shop with