Serif released a 10 day trial of Affinity Photo, their photo editor launched this Summer for Mac, presented as an alternative to Photoshop. 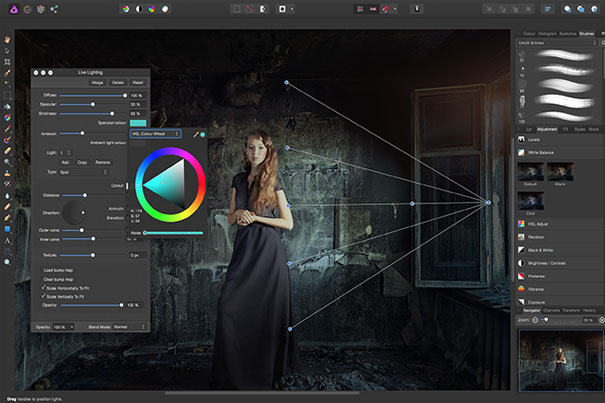 Since its launch this Summer, Affinity Photo became one of the hottest photography editors available on the market. Sold for $49,99, “no subscription”, as Serif states, the program was well received, has been rated 5-star by many customers and now you can try it for 10 days, to form your own opinion.

Available “exclusively” for Mac only, although a Windows version is suggested as viable in the future, Affinity Photo received an amazing number of positive reviews which make it clear that Affinity Photo offers something truly exceptional for photographers. Many tried it during the beta period, but now that the commercial product is available, Serif felt it should distribute a demo version so users can get their hands on the app and try it.

“We had an incredibly successful free public beta of Affinity Photo, which ran in the 6 months leading up to its official launch in July 2015, where lots of photographers and image editors were able to test Affinity Photo and chart its development. But we know that there are some who want to see what made it into the version we released on the Mac App Store before they commit to transitioning their workflow, which is why we have released a free 10-day trial.” said Ashley Hewson, Managing Director of Serif.

Affinity Photo’s innovation and performance are free to try in full for 10 days—all adjustments, filters, tools, features, importers, exporters, and file saving work with no restrictions or watermarks. Engineered for professionals, as Serif says, the program can open, edit and save Photoshop PSD files, works in RGB, CMYK, Greyscale and LAB colour spaces, offers an end-to-end CMYK workflow with ICC colour management, full 16-bit per channel editing and works with all standard formats like PNG, TIFF, JPG, GIF, SVG, EPS and PDF.

Exporting 3D LUTs from Affinity Photo to a video editor

Tony Brightman, who heads up Affinity development, goes onto say “We are committed to continually improving and updating all Affinity apps—we have already released an update for Affinity Photo in the short time since its launch, which optimises Affinity Photo for El Capitan. The free trial of Affinity Photo lets photographers and image editors try out this latest version.”

Mac App Store pricing for Affinity Photo is £39.99/€49.99/$49.99 with no subscription and a promise of free updates for 2 years from launch. The app is always easy to find in the Mac App Store.