Available only for Mac, but with a Windows version planned for 2016, Affinity Photo is the Best Mac App of 2015, at the exact moment a new update shows up! 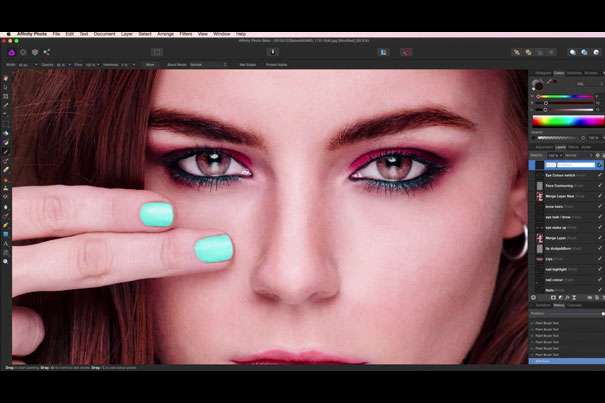 Serif, creators of Affinity Photo and Affinity Designer, were just about to launch new updates to their programs when the news arrived: Apple elected Affinity Photo the Best Mac App of 2015. A new triumph for a photo editor released last July.

This is the first major update to the professional image editor, and to celebrate both the update and the award, Serif is offering a one-week 20% discount in the Mac App Store. First released in July, Affinity Photo has already gained a formidable reputation offering high end professional tools, incredible speed, and rock solid stability. The fact it’s also offered at a low price, with no subscription to pay for, has made it very popular with photographers – regularly topping the Mac App Store charts, and receiving multiple 5-star ratings on the store worldwide.

One area of all-new technology the app is boasting is super accurate image alignment. This has opened up two new major new features of panorama stitching and image stacks.

“The accuracy of panorama stitching in the app really is as good as it gets – and with Affinity Photo’s advanced memory management you can build up images of hundreds of mega-pixels and still have incredible performance when you go to edit,” said Ashley Hewson, Serif’s Managing Director. “Then we’ve got image stacks—from simply removing an unwanted moving object from multiple shots to advanced techniques like layering multi-exposure composites, they add a whole new dimension to what is possible in the app.”

Another big addition has been the inclusion of six extensions for Apple Photos, opening up some of Affinity’s technology directly from within the Apple app. The extensions included are: 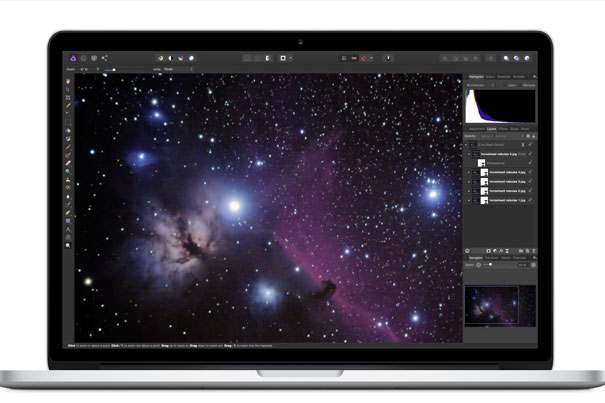 “Opening up the ability for developers to produce extensions for Photos was a big part of the El Capitan update, and it’s been fun writing for it,” said Ashley. “While Affinity Photo is a very robust professional product and will always stay that way, extensions allow us to expose some of that power in a more use-case focused way for quick and easy editing.”

Other Apple technology has been harnessed, too–in particular fully supporting the extended gamut DCI-P3 displays found in the latest iMacs, giving a depth of colour to images beyond what was possible before. Other new features and improvements include canvas rotation, PDF/X and spot colour support, customizable keyboard shortcuts, additions to filters, adjustment layers and blend modes, and significant improvements to PSD compatibility.

The developers have had an incredibly busy end to the year, as not only have they been preparing the update to Affinity Photo, they have also launched an update to their Apple Designer Award-winning app Affinity Designer. Designer now includes artboards, along with lots of new professional print features. Launching both updates at the same time ensures both apps remain fully compatible with each other. Both updates are available now, free to owners of each app via the Mac App Store. For new customers they are available at the special offer price of just £29.99/€39.99/$39.99 each until December 15th, after which they revert to the normal price of £39.99/€49.99/$49.99.

Serif continues to put emphasis on the fact that Affinity Photo has no subscription fee, adding that, as promised, owners of the program will always get regular free updates to the app for at least the first couple of years. While some minor improvements have already been pushed, this is the first time a significant number of new features have been added, making affinity Photo even more complete when it comes to photo editors.