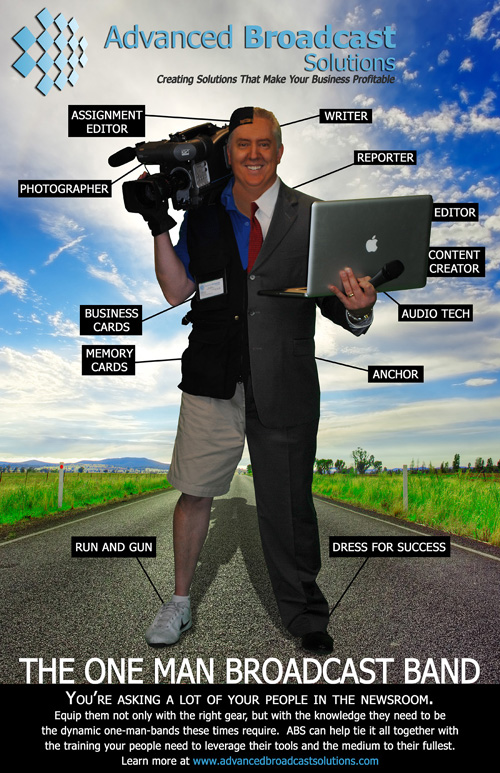 Premier systems integration firm Advanced Broadcast Solutions (ABS) announced today a new campaign to help train news professionals that are coping with the expanding adoption of the one-man band production workflow. Coinciding with the release of its “Creating Content: The One-Man Band” promotional poster, ABS has developed a curriculum to train broadcast news veterans and others to produce complete and compelling stories with little or no crew support.

According to Tom Layson, ABS Content Creation Advisor and broadcast news veteran, larger market stations traditionally employed news crews in the field, sometimes with as many as three or four people, to handle various responsibilities including photography, audio, engineering, and on-air talent. In contrast, smaller market crews were generally limited to one or two-man teams for news coverage.

Now, however, a troubled economy combined with improved technology are changing the landscape of ENG production. “What’s happening today is that larger markets are going with smaller crews,” Layson explained. “The new gear is smaller and easier to use, so the technology is supporting the economic considerations that are driving decisions about who gathers news and how they do it.”

The one-man band approach requires an individual to handle all elements of a news package, from writing a script to editing the finished product. This expansion of production responsibilities is a challenging transition for many newsroom veterans. “It’s going to be tough,” Layson admitted. “A lot of students from broadcast programs are going to be more prepared for one-man band environments than a lot of mid and late career professionals.”

“The one-man band paradigm doesn’t have to be about killing jobs, but it is about changing roles in the video production landscape. These people don’t have the training to properly write, shoot, and edit a news package,” said Mark Siegel, President of ABS. “If an organization needs training for its employees, we’re ready to do it. We can also work with existing consulting relationships and help news organizations pick the right tools for their workflows.”

For more information about ABS, call 206-870-0244 or visit our Web site at www.advancedbroadcastsolutions.com.