Tips to configure or upgrade a workstation for their main video software. 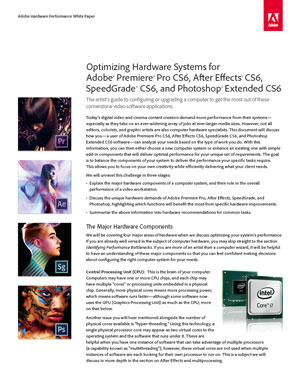 One of the early advantages of desktop video production software over dedicated hardware was that it could run on “any” computer. As tasks became more demanding (multiple streams of 4k video, anyone?), and computers become more capable (4 gigabyte drive modules used to be considered huge; now that's a minimum RAM configuration), configuring desktop computers to get the most out of this software became more of a black art. Recent advances in using graphics processing units (GPUs) on video cards for tasks beyond faster interactive gaming have only upped the ante.

Against this backdrop, Adobe has made available a “white paper” with background information and suggestions on configuring workstations to get the most out of the CS6 and CC versions of Adobe Premiere Pro, After Effects, SpeedGrade, and Photoshop Extended. This document is not aimed at those already proficient at customizing their computers to wring the most out of them; instead, it is aimed at artists who are more likely to buy an already-built system, and needs advice on what options to order or what upgrades to plug in to either a new or already-existing system. The emphasis is placed on workstations, as they have the most expansion options, although laptops and all-in-ones are also discussed. Windows and Mac OS are covered equally.

For the beginner, this paper first demystifies what the major computing components are (CPU, GPU, RAM, and storage). The core of it then goes through each of the programs covered and discusses which functions in each stresses which components of a system (for example, ray-traced 3D rendering in After Effects CS6 greatly benefits from specific qualified NVIDIA video cards that support CUDA processing, while multi-processor rendering in After Effects benefits from having more RAM). It then summarizes considerations when configuring each of the major components of your machine, based on the software and tasks that are more important to you. It doesn't cover every case, but it should at least make you aware of the issues, and provides some guidelines.

Now, the FTC (Federal Trade Commission) requires that bloggers reveal their associations with companies they write about, and in this case I am happy to say I was very involved with Adobe in the creation of this document – as were many of you! Several months ago, PVC hosted a free webinar by creative director, producer, and editor extraordinaire Christine Steele called Confessions of a Switcher: Moving to Adobe Premiere Pro and using an HP Workstation (still online; registration required). I was MC, and afterward a few of you asked me for more details on configuring workstations for Adobe's Production Premium software – a subject made more urgent for some by the (ahem) slow pace of updates to Apple's MacPro workstation. I relayed your questions to Adobe, who in turn commissioned me to work with them to create this paper; I followed up with a few of you to make sure your questions were getting answered.

I hope you find the resulting document useful. Again, hardware ninjas will already know this stuff; the intended audience is those who want to spend a day (tops) worrying about hardware, and then who want to get back to practicing their craft on a fast, stable, appropriate system without thinking about it. Again, click here for a direct link to the PDF.