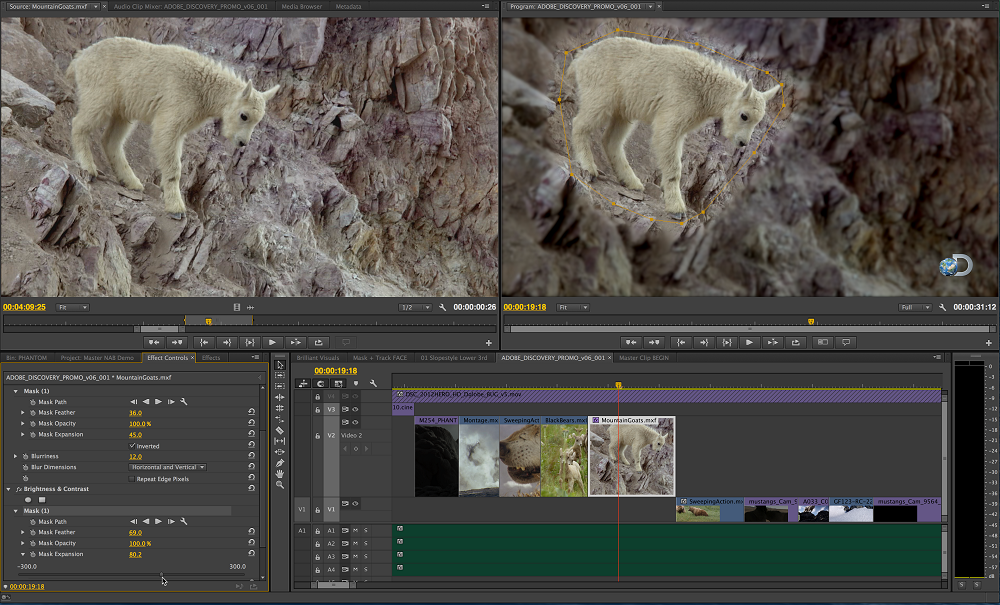 Adobe (Nasdaq:ADBE) today announced plans to significantly update all the video apps in Adobe Creative Cloud and will showcase these innovations at the NAB 2014 show in Las Vegas next week. Milestone feature additions, expected to ship in the next coming months, include major updates to Adobe Premiere Pro CC and Adobe After Effects CC, designed to make everyday tasks easier and faster, enabling video professionals to create stunning videos, TV shows, films and commercials more efficiently. At NAB Adobe is also unveiling new features for Adobe Anywhere, the collaborative workflow platform that empowers teams using Adobe professional video apps to work together as they access and manage centralized media and assets across virtually any network.

Revealing the Future of Adobe Video

At the NAB 2014 show, Adobe will provide a sneak peek of the innovative magic coming soon to the company’s professional video apps. Key updates include :


Collaborating in Real-Time with Adobe Anywhere

Adobe will demonstrate these new solutions for the first time at NAB at its booth #SL3910, in the South Hall of the Las Vegas Convention Center, April 7 – 10. Adobe will also highlight key customer and partner focused initiatives at its booth and will have its professional video and broadcast apps presented in nearly 100 partner booths throughout the NAB exhibition.

“Broadcasters, filmmakers, corporate publishers and video professionals today are expected to relentlessly keep up with new formats, frame rates and distribution methods. Customers who have switched to Adobe Creative Cloud from alternative offerings tell us that Adobe apps and solutions give them a significant advantage. And with hundreds of new features and enhancements added with regular releases over the past 12 months, we continue to raise the bar with faster workflows for video pros.” – Steve Warner, vice president of product development, Adobe

“NASCAR is all about speed. Adobe Creative Cloud provides us with all the tools we need to deliver content at a faster pace than we've ever experienced before. The frequent updates to the apps like Adobe Premiere Pro and After Effects, as well as the prospective collaboration and efficiency benefits of Adobe Prelude and Adobe Anywhere, provide us with new features that improve our workflow and allow us to focus on the content of our videos instead of the technology behind them.”  – Chris Witmayer, Director of Broadcast, Production & New Media Technology, NASCAR Productions

“Starting a new show and workflow on Adobe Premiere CC made the most sense for us. The added benefits of working with footage natively and being able to take advantage of GPU acceleration really sealed the deal for us. Not to mention the obvious integration with all the Adobe apps we know and love really made Adobe Premiere CC the right choice for us.”  – Dan Dome, Associate Director, Post Production, Late Night with Seth Meyers

“After Effects CC is continuing to get more integrated with Premiere Pro CC and it’s just a dream come true for editors. Live Text Templates are a perfect example of having less back and forth, less rendering time, and more integration. It’s almost like working within one software program versus two.”  – Ryan Connolly, Owner, Film Riot

At NAB, Adobe is previewing the next major updates to its professional video and audio products that are not yet publicly available. These updates are expected to ship in the next couple of months, along with other major updates to Creative Cloud. Learn more about the forthcoming video updates here or register for a special webinar on Thursday, April 10 here. To be among the first to know when these and other Creative Cloud updates are available, follow us on Twitter @creativecloud or join us on Facebook.

Creative Cloud is a radical rethinking of the entire creative process and an industry-defining shift in creative expression and inspiration, where members can explore, create, publish and share their work across devices, the desktop and the Web. With Creative Cloud membership, users also have access to: a vibrant global creative community; publishing services to deliver apps and websites; cloud storage and the ability to sync to virtually any device; and new products and exclusive updates as they’re developed.