If fact all the Adobe apps will get some love as the annual Adobe MAX means product updates as well as sneak previews of what is to come.

It’s time for another Adobe MAX which must mean yet another update to Adobe Premiere Pro! Adobe MAX is once again all virtual and completely free so if you haven’t yet signed up get over to the Adobe MAX site and do it right now!

There’s some nice, new stuff happening in Adobe Premiere Pro, After Effects and Character Animator. If you don’t keep up with the Premiere beta releases then you might be a number of feature updates behind and there has been a good bit rolled out in the beta recently. Here’s a few of my favorites. You can get an idea of the entire Adobe universe beyond Premiere Pro and the video app here, including some discussion of the recent Frame.io acquisition. BTW, the Photoshop updates to masking look amazing.

All the Adobe video products are discussed in more detail here.

Remix comes to Premiere (in the beta)!

Remix has been in Adobe Audition for years now. Remix uses Adobe Sensei to retime music to make the duration shorter or longer depending on your needs. It is cool but being in Audition means it went unused for many as you have to go to Audition, make the remix, export back to Premiere and then potentially do it all over again as Remix has a 5 second window of durations it can hit which may or may not work.

Remix is now part of the Essential Sound panel in the Premiere Beta, not the full shipping version just yet. Tag your music to Music and set your duration. 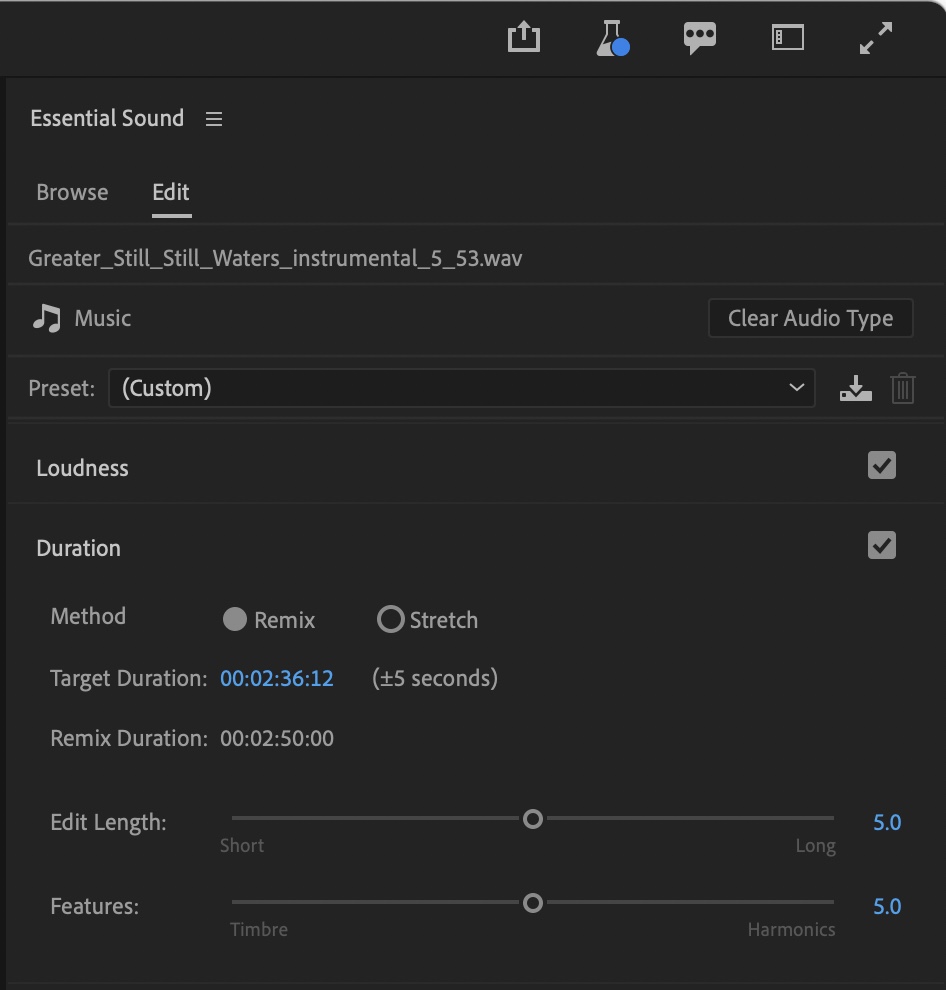 As you make changes to that duration Remix will update the music clip in the timeline.

Those little squiggle lines are where Adobe Sensei is making the music edits to make your remix possible.

Have this within Premiere means there can be a lot more experimentation with music “edits” since you don’t have to roundtrip. Depending in your song structure and how you twiddle the sliders you can see some pretty big differences.

Automatic remixing can tweaking if your song has a lot of different movements and you can see that above.

But what will be used most often is the new Remix tool that lives under the Rate Stretch Tool in the edit tools submenu of the tool bar. I bet 90% of all Adobe Premiere Pro Remix’s will be a click and drag using this new Remix tool. Let me add here that I hate the Remix tool.* Music editing is a complex editing craft that has to be learned and refined over many hours tweaking music edits to get them just right. A tool like the Remix tool makes editors lazy.**

Uhh, yea so * I will use Remix all the time. ** Call me lazy with the rest of ’em as Remix is a fun and fantastic tool. It is available in the Premiere Pro Beta as of this MAX but not the shipping version just yet.

The new Simplify Sequence command was talked about publicly before but it finally gets a release. This is going to save a ton of time cleaning up untidy timelines. Right+click on a timeline or go under the Sequence menu and choose Simplify Sequence. 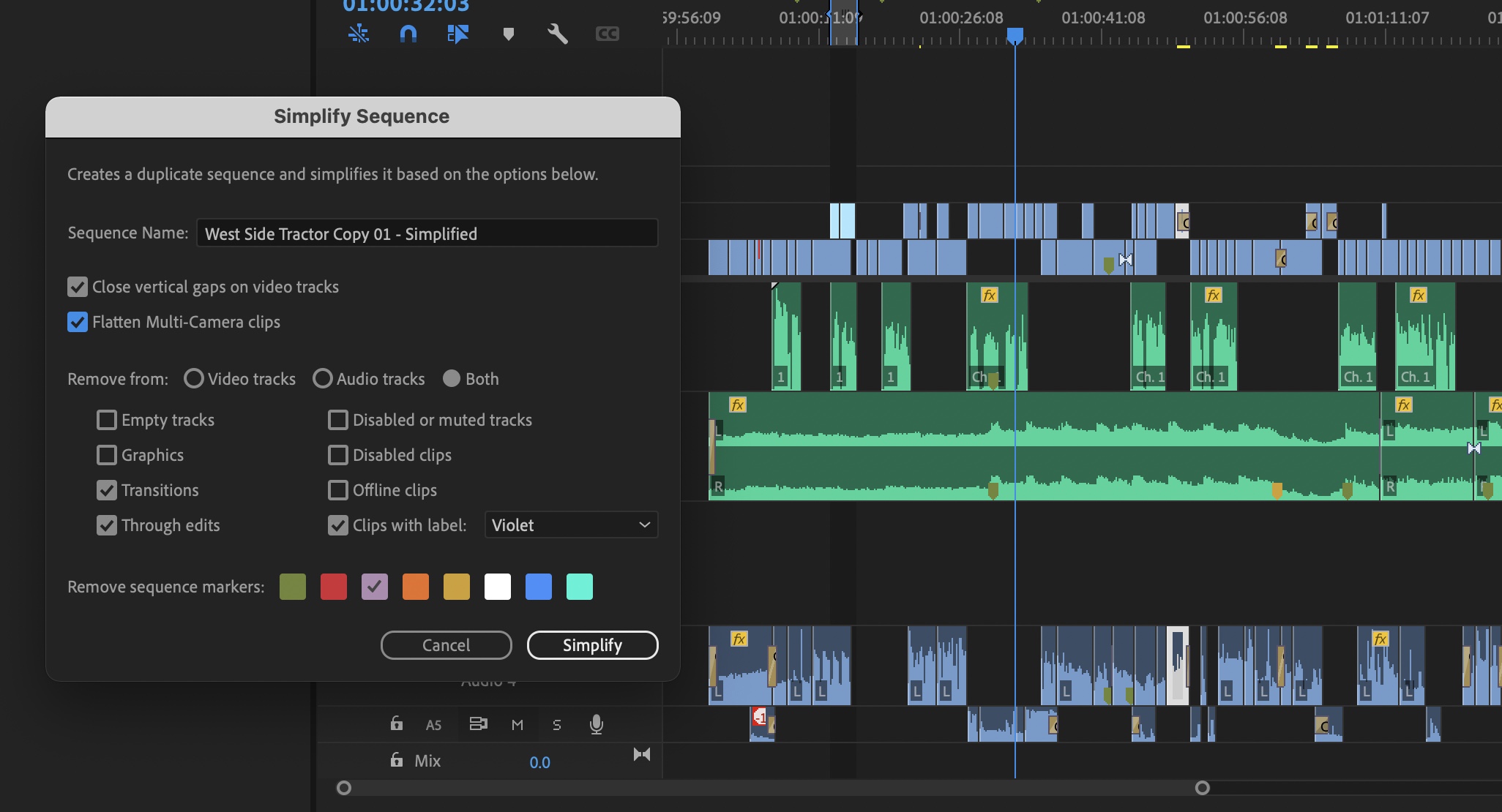 You get a lot of granularity here depending on what you might want to do. It might take some trial and error to get it exactly right because there are so many options, but you can always Undo if you don’t get the desired result. Of notes, Simplify Sequence won’t overwrite clips when closing vertical gaps so it won’t take your B-roll on video 2 and overwrite your interview on video 1, for example. This is important as it has no way to know you don’t want those clips underneath another in video tracks.

If you tend to keep your timelines tidy then you might not use this as much as others who might be a bit … messier. If you’re turning over an edit to color grading then you should ALWAYS turn over a tidy timeline and this can help.

One other note.. look what happens when you go under the Clips with label popup menu: 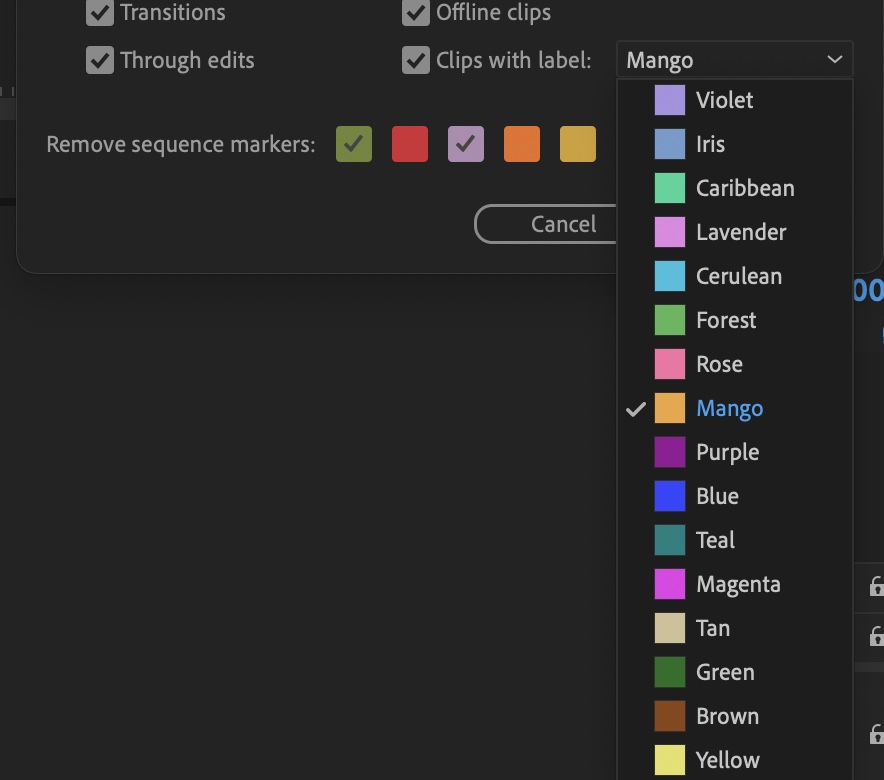 OMG that’s a little color swatch where you can actually see what color Cerulean is!! Why can’t we get this in the actual Label menu Adobe??? If we finally do you won’t need my label color cheat sheet anymore.

Other new features of note

Adobe has made a number of updates recently and, as mentioned above, these often come to the Public Beta first including:

The last big release was in July. But the public beta has the new Import and Export modules as well as a new Auto Tone option. The Premiere Beta can be installed alongside the shipping version so everyone is free to test it out.

After Effects gets a few things of note as well: