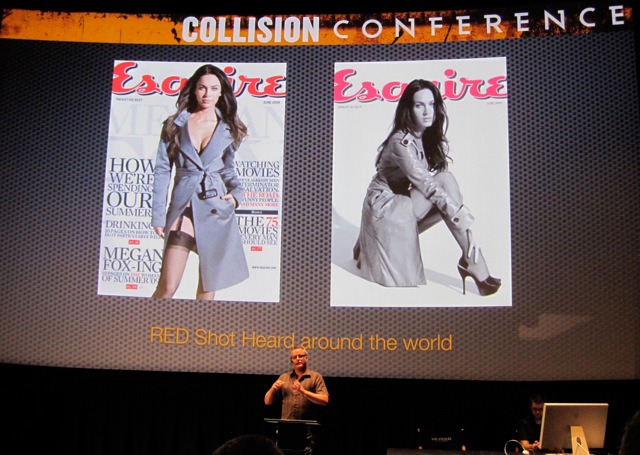 By now, you’re probably aware of what is still the only HDSLR convention, PhotoCine Expo. If there is a driving force behind both of these conventions it is Michael Britt. Michael started as a unit stills photographer on movie sets which led to a career in digital photography. Due to his expertise, Michael became consultant to high end photographers converting to digital. All of his experience; technical, creative and marketing culminated in the creation of Image Mechanics where Michael was a partner until 2009.

It was during his development of the brand of his new business that he was tapped as a writer and a speaker. Beyond the production of PhotoCine Expo, Michael also produces the wildly successful companion to the expo, PhotoCine News. He is also writing a book on digital photography and of course, he now writes for HDSLR Coalition. In this interview Michael tells us how he starting shooting with video with the 5D Mark II, and he tells us what we can expect at this year’s PhotoCine Expo.

PVC: How and when did you become aware of the video capabilities of the 5D Mark II?

MB: When the 5D MkII was announced, I owned and ran a photographic digital capture company so it was on my radar right away. I took a look at it and realized that without manual controls it was just a novelty and not something to use in a production environment. I had on good authority the date that the firmware was going to be released to allow manual exposure control so I set up a test shoot with a friend of a friend as the model and borrowed a Redrock Micro rig and a Marshall monitor to check it out. I was really interested in the ability of photographers to catch pieces of video for the web and for digital signage so I worked with Brian Valente from Redrock Micro to adapt their rig to shoot vertical video. That test shoot was a proof of concept for me regarding the viability of HDSLR video and vertical oriented content. I also wanted to prove that you can capture stills in-line with the video. Everyone argued with me and said I’d be ruining the best parts of the video but I looked at TV commercials that I liked and noted that a 2 or 3 second sequence is the norm and not the exception. You have to be really disciplined and have a plan to shoot this way but it is doable.

PVC: What was the trigger that prompted you to start thinking about Collision Conference?

MB: The results of that test shoot took me and my team 8 days to edit and put up online in an optimal format. Remember this was at a high tech digital capture company where reading instruction manuals was part of our daily routine and we had access to the fastest computers with the latest software. Part of the problem was getting the vertical orientation to stick and show up on Vimeo. There was very little information about vertical videos at the time. As a matter of fact, the Vimeo website just suggested not to do it. It also took me a bit longer than I thought to get going in Final Cut Pro. I realized that even though there is a lot of overlap between digital photography and HDSLR video, there’s still a steep learning curve and I wanted to share my successes and failures with my peers.

PVC: How quickly after its conception did you begin working on making it a reality, and can you briefly explain what that entailed?

MB: I think the test shoot was somewhere around June 15th of last year and the conference was at the end of August. So about 8 or 9 weeks. Looking back, Tom and I were nuts to do an event that size in that short of a time. The first two hurdles for production were the content and exhibitors. Finding capable speakers who were actually working professionally with these cameras was tough since the market was really only a few weeks old. We scoured the internet and got some help from Mitch Aunger at Planet5D since his 5D photo blog had morphed into a 5D MkII video blog. We collected all the information we could and then chose speakers who complimented each other and who were trailblazing HDSLR video. The group we put together was amazing. Rodney Charters, Shane Hurlbut and Vincent Laforet have really broken out as leaders in this field and we were lucky to spot them first. We had support from Redrock Micro at the beginning but getting other manufacturers on board was a challenge at until the buzz started to spread about what we were doing. This was extremely short notice for a corporation and I’m amazed at the exhibitors who were able to see the importance of this event and make it work with their budgets and schedules. Since it was the first conference about the collision of stills and video, I don’t think the general public was really aware of what we were trying to do. Getting people to show up was harder than I thought but the event was a success to the point that most people in attendance feel it was ground zero for the HDSLR movement.

PVC: If you had to pick a the most special moment, event or first ever occurrence at Collision Conference, what would it be and can you elaborate on it?

MB: That’s like asking my which of my dogs is my favorite! Tom and I put together an event that I would want to attend. That’s really the only way I know how to do things. I probably should start with a budget and business plan and work backwards but that’s just not the way I do things. If I had to single out two moments, the first would be sitting in the theater watching Shane mesmerize the audience with his knowledge and charm. He’s a real rock star and I would listen to him read the phone book. I also think that the speaker cocktail party was a real highlight of the event. This is where the speakers really got to know each other and formed some lasting relationships. It would have been amazing content if that party had been recorded with hidden cameras and microphones. Hearing these guys excitedly comparing notes and sharing their experiences was amazing.

PVC: Why did you feel the need to follow up with another HDSLR conference?

MB: I made some changes in my life last year including leaving the business I helped build. My focus has shifted from still photography to micro production and HDSLR filmmaking. I guess you could say that I’m hooked on it and that I have totally immersed myself in it. I hadn’t planned to produce another conference. It really takes a lot out of you and with the economy being the way it is, it’s probably a bad idea right now but there was so much interest in it that we decided to team up with our blog partner Lou Lesko and create PhotoCine Expo. This time around, we had a whole 12 weeks to produce our event. I must be a sadomasochist or something. It just seemed like none of the other conferences or expos really get what we are trying to do here. It’s like they know that HDSLR is a popular catch phrase and want to latch on to it but they don’t understand the movement behind the terminology.

MB: Anyone who is interested in shooting video and/or making movies with a video enabled DSLR camera. It doesn’t matter if you are a novice or an expert, this group of like minded people gathering to discuss gear and techniques is the place to be. We have a great line up of inspirational speakers, workshops, post production training and even a break out Master Class with Vincent Laforet where he will be teaching in the Cinematography department of the Los Angeles Film School all day on Saturday. He’s going to be like a kid in a candy shop with all the infrastructure available at the school.

PVC: Why is it important for people to attend Photo Cine Expo?

MB: It’s important to be part of a community and to share in the successes and the failures. Don’t underestimate what I mentioned earlier about being with a group of like minded people. This is a grass routes movement that even the people who made the cameras never anticipated. Filmmaking is more of a team sport than still photography and I think that user groups are going to be important in the growth of micro production/HDSLR filmmaking almost to the point of becoming mini production companies where everyone wears multiple hats to help each other complete their projects.

PVC: We’ve been hearing about the expo for months now, but are there any surprises that have come up at the last minute?

MB: We were leaving room for a surprise or two but the hard part about booking people who are successful is that they are in demand and rarely available. I am happy that Robin Schmidt has made it over from England and hope to feature him somewhere. He is a very interesting and entertaining guy who is famous for a sexy football video, an HDSLR pilot for British TV and for his recent double DSLR video rig the Beastmaster. Even though it’s not a surprise, I’m really excited about Cardboard Warfare 1.5 debuting at the Expo. I loved the originality of Clint’s first action short and with support from Redrock Micro and Duclos Lenses, sent him a bunch of gear to shoot a sequel for the expo. Then as a further tie-in, master colorist Bob Sliga took Clint’s short and color graded it for the expo. He is using the footage to teach Apple Color grading on Sunday. I don’t think any other event has done anything quite like this and I can’t wait to see how it all plays out.

You can meet Michael and imerse yourself in the world of HDSLR at PhotoCine Expo this Saturday and Sunday September 25 and 26 at the LA Film School. For more information, go to their website at http://photocinenews.com/expo.