This is the first installment of a six-part HDR “survival guide.” Over the course of this series, I hope to impart enough wisdom to help you navigate your first HDR project successfully. Each day I’ll talk about a different aspect of HDR, leaving the highly technical stuff for the end.

Thanks much to Canon USA, who responded to my questions about shooting HDR by sponsoring this series.

1. What is HDR? <You are here
2. On Set with HDR
3. Monitor Considerations
4. Artistic Considerations
5. The Technical Side of HDR
6. How the Audience Will See Your Work 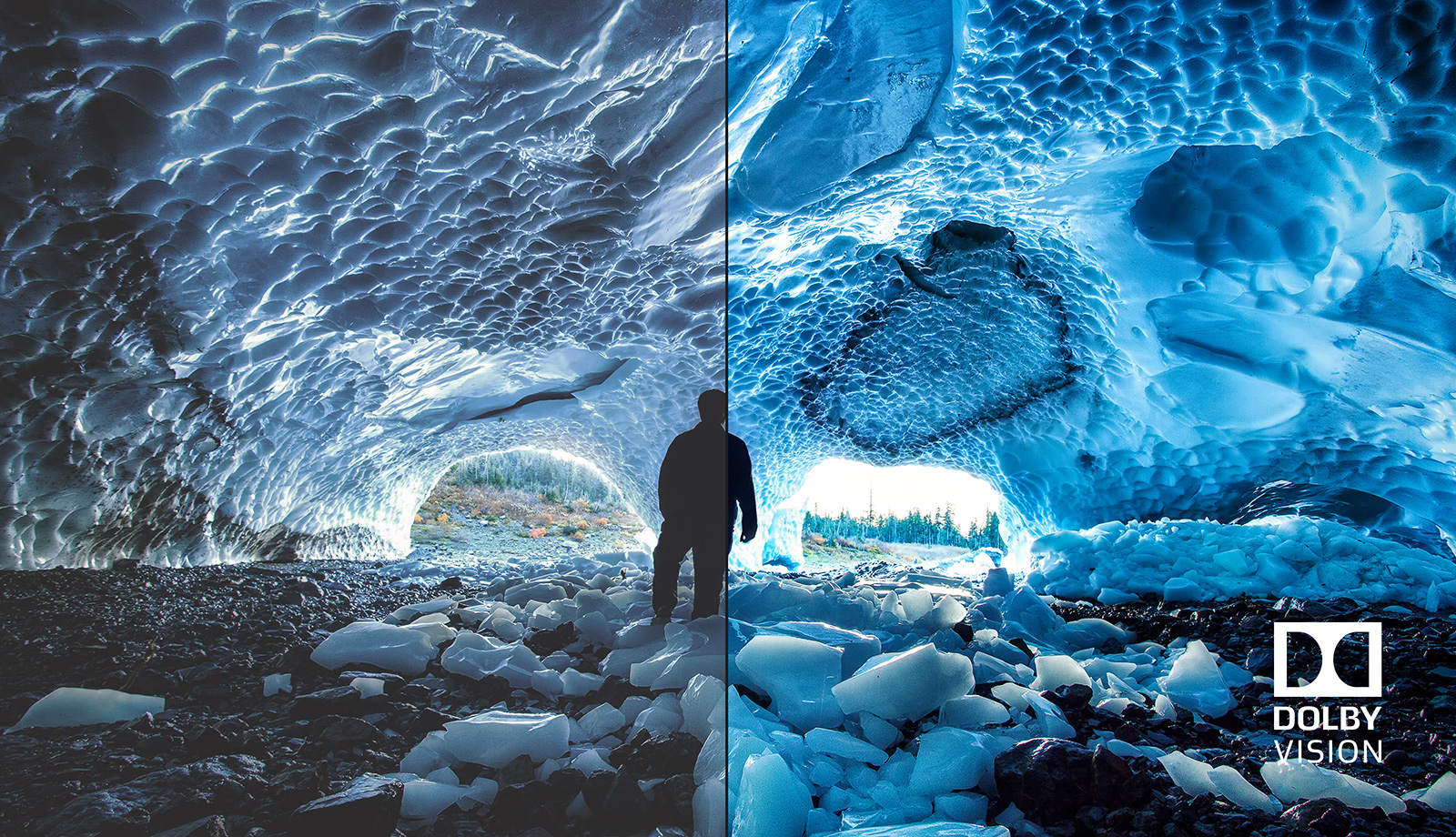 There was no shortage of HDR displays on the NAB 2016 show floor. At each booth I sought out someone of authority and asked, “What do I—as a cinematographer—need to know about shooting for HDR release?” I received only one response, from a colorist demonstrating HDR grading techniques:

This is not something one says to a cinematographer. We consider ourselves to be the “authors of the look,” and while we don’t mind colorists enhancing our artistic vision, we certainly don’t want them to replace it.

Only one manufacturer took my question seriously, and while they had no answer for me at the time they vowed to help me find one. Several months later I found myself standing on a soundstage near Hollywood with a Canon C300 MarkII camera, two Canon DP-V2410 monitors, and a small group of Canon technicians.

Note: While Canon commissioned this article series and helped facilitate this test, the opinions in this series of articles are solely my own, and are based on my honest opinions of what I’ve seen.

My goal: evaluate the differences between SDR (standard dynamic range) and HDR (high dynamic range) displays in real time, with an eye toward teaching cinematographers how best to light and expose for this new medium. That research, in combination with knowledge gleaned from several cinematographers and colorists who currently work in HDR, led to the article you are reading.

There are a lot of questions still to be answered about HDR grading and delivery, but by the end of this article you should know enough to shoot an HDR project and thrive, rather than simply survive.

WHAT HDR IS, AND WHAT IT IS NOT

Modern cameras capture a dynamic range of 14-16 stops. Modern televisions display six linear (uncompressed) stops. When the “Rec 709” HDTV standard (known from here on as SDR) came into being, six stops of linear dynamic range seemed enough. This captures the dynamic range of non-shiny surfaces in the real world: matte white is about two stops brighter than middle (18%) gray, while matte black is two to three stops darker.

The X-Rite® color checker illustrates how narrow a range this is, while illustrating how critical those few stops can be. The difference between the white and black patches is only about four stops, and yet that covers a range of tones that appears black, white, and every shade of gray.

SDR doesn’t account for specular highlights, deep shadows, or uncontrolled lighting conditions in general. Now, 20 years after SDR was defined, the worst professional camera captures twice the dynamic range that SDR can display. New monitor technologies (OLED and local dimming LED) make it possible to display a camera’s full dynamic range with minimal tonal compression and more saturated colors than ever before. Where SDR was content with six stops of dynamic range, a modern consumer television can’t be certified as HDR ready without being able to display at least 13.

HDR, however, is not simply brighter television. A good HDR display will reproduce nearly the entire dynamic range of any professional camera with the same contrast that existed when the image was captured. No longer can we hide cables in the shadows and light fixtures in the highlights, as both now display as much contrast, saturation and detail as mid-tones. 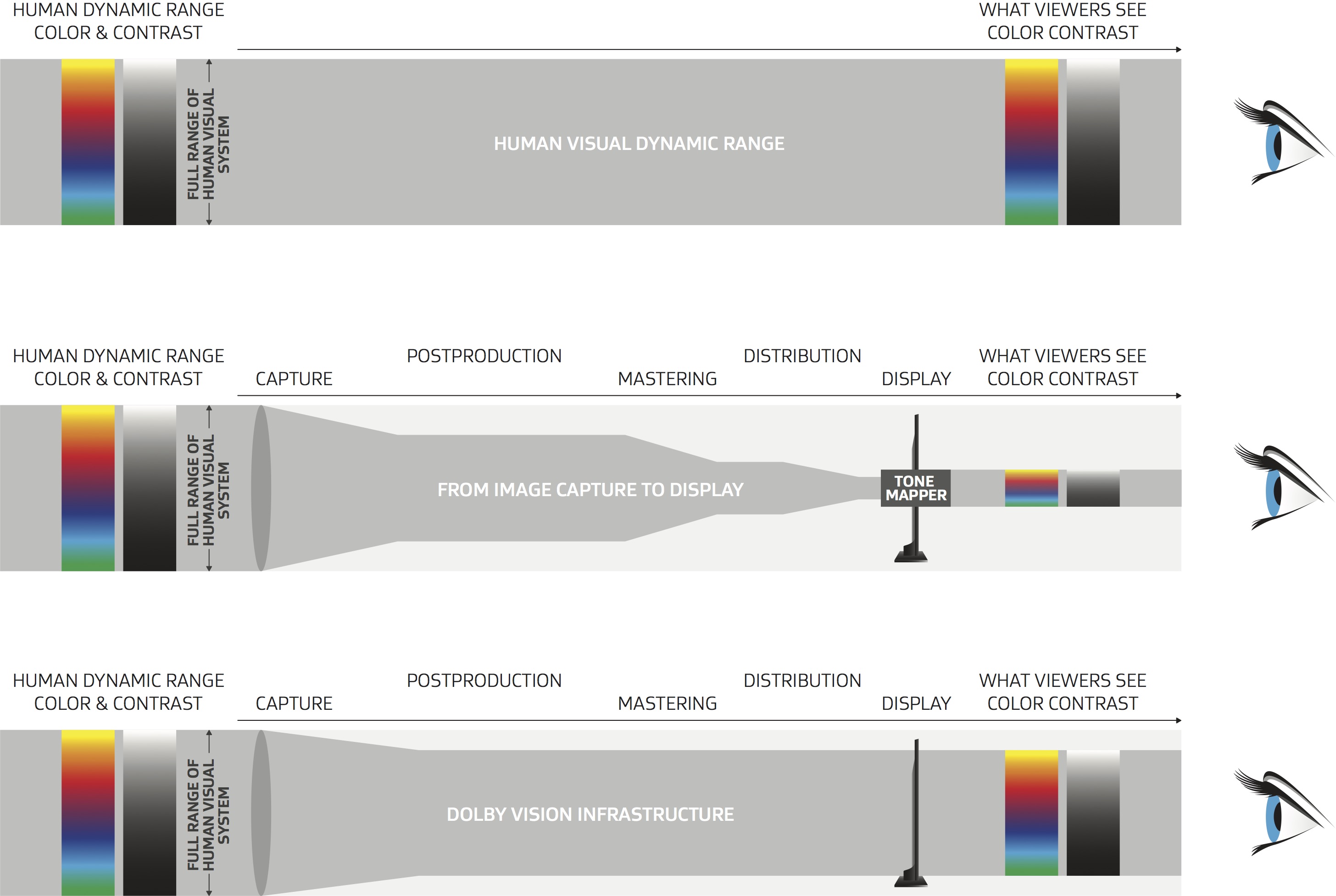 (above) This graphic best illustrates the differences between SDR and HDR. At the top, the full contrast range of a scene is reproduced by the human visual system. SDR, in the middle, reduces the original contrast of a scene in order to display it on an SDR television, with dramatically less dynamic range than can be perceived by the human eye. At the bottom, HDR preserves most of the dynamic range of the original scene, displaying it on a consumer television with contrast that closely matches what the eye would have seen had it been present during image capture. (Illustration provided by ©2016 Dolby® Laboratories.)

Display brightness is measured in candelas per meter squared, or “nits.” A calibrated studio SDR monitor will emit a maximum of 100 nits. Current HDR displays are capable of emitting anywhere from 400 to 4,000 nits, and the Dolby VisionTM specification stipulates that HDR image data can be as bright as 10,000 nits. (Currently most programs are mastered with a peak luminance of 1,000 to 4,000 nits.)

Depth of shadows is as important to HDR as intensity of highlights. Where a normal SDR studio monitor may reproduce black between 1 and 2 nits, the Canon DP-V2410 HDR monitor is capable of reproducing black at 0.025 nits. 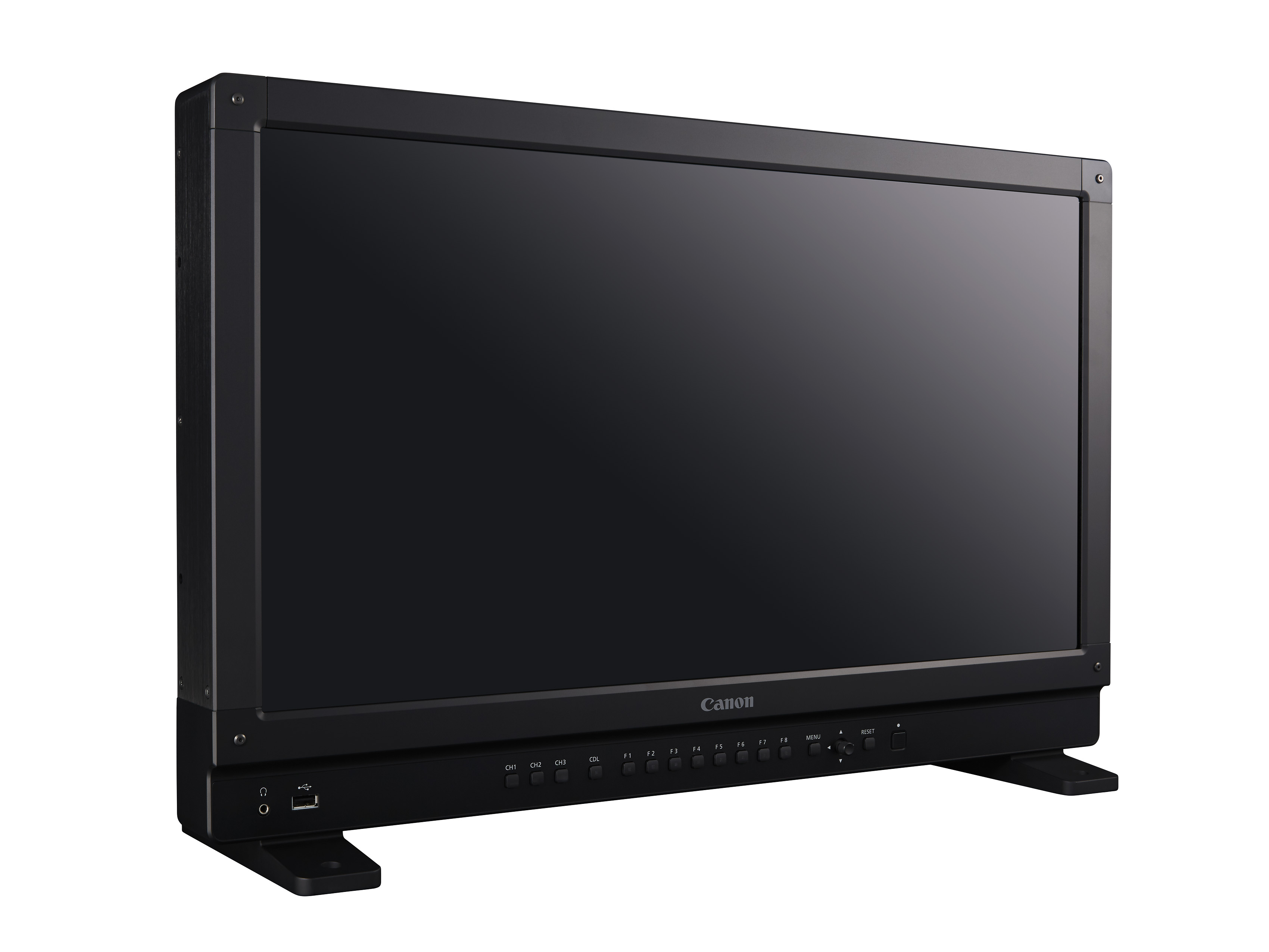 SDR’s six stop mid-range, from matte black to matte white, will look the same on both an SDR and HDR set. The difference is that HDR goes way beyond, giving us shades of white and black that are brighter and darker than anything we can see in SDR. And, because we aren’t cramming 14 stops of captured dynamic range into a six stop bucket, every stop is displayed with roughly the same contrast. This results in an increase in highlight and shadow detail as well as color saturation.

Displays come in various flavors of HDR, and it’s helpful to have a reference as to how bright or dark they are in relation to each other. Doubling or halving a light’s intensity results in an exposure change of one f/stop, so it’s fairly simple to determine how many additional f/stops of highlight dynamic range a 1,000 nit HDR display can reproduce over a 100 nit SDR display: 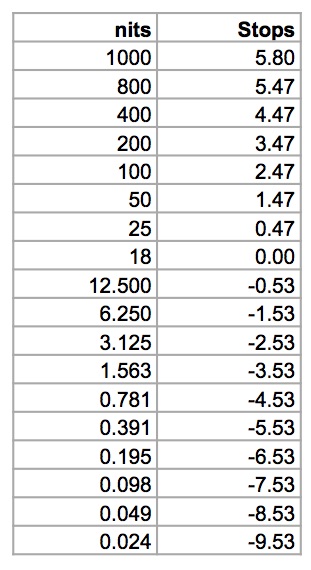 (above) Nits vs. stops, as reproduced by a typical HDR display. Thanks to Nick Shaw of Antler Post for this data.

What’s tricky is that HDR code values are absolute: if a monitor can only display five stops above middle gray, and a camera captures six, that monitor will not automatically display that last stop. Highlights that fall into that last stop won’t be clipped in the recording, but they’ll be clipped on the monitor.

There are several schemes that allow for the reproduction of highlights that fall beyond the capabilities of a consumer television, but none of these are appropriate for professional use. They will be covered later. Canon professional HDR monitors offer a feature called HDR range, which scales the HDR signal to fit the constraints of the monitor. This is covered in part 3, “Monitoring Considerations.”

1. What is HDR? <You are here
2. On Set with HDR <Next in series
3. Monitor Considerations
4. Artistic Considerations
5. The Technical Side of HDR
6. How the Audience Will See Your Work

The author wishes to thank the following for their assistance in the creation of this article.

Disclosure: I was paid by Canon USA to research and write this article.