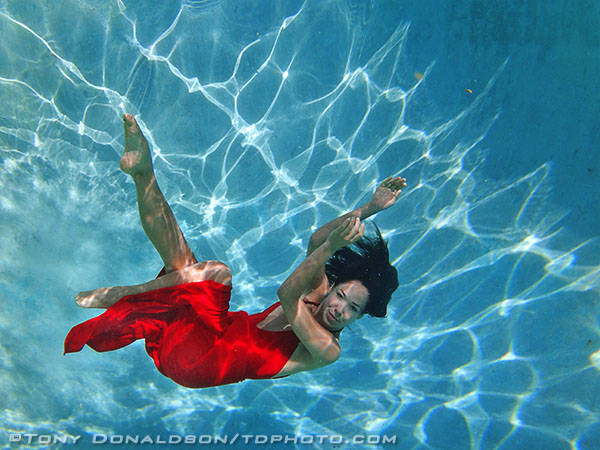 I had a chance to spend a little time playing with Sony’s TX10 waterproof digital camera. I had a total blast with it!

It’s small, it’s VERY easy to use, and it’s virtually indestructable for most mortals. It’s waterproof to pool depths, dustproof and shockproof. The latter means that if you drop things often, this one will likely survive. 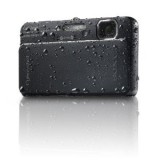 The intelligent auto setting is fantastic. Set it and forget it. I tried a few tricky situations, like strong backlighting, and the camera still gave me great pictures. There’s no substitute for good lighting in photography, but if you don’t know much about it, a camera like this can help you make good pictures, anyway.

The menus, accessed via the touch-screen LCD on the back, are simple, easy to read, and easy to use. I was really impressed. Sony’s done a great job with this. In addition to the intelligent auto, it has face and blink detection, iSweep panoramas, underwater settings, and even a couple of options for 3D. The 3D is interesting, as the camera only has one lens. For sweeping panoramas in 3D it makes sense, it can interpolate that, but it can do 3D stills as well. The odd thing is that I’ve shot a few 3D things, but since the LCD on the back doesn’t show them and I don’t have a 3D TV or a PC that will run Sony’s software for this, I’ve only seen the 2D versions. It makes two files, the image file and another file with the 3D information in them. Interesting and useful way to handle this.

It also has a mode called “Background Defocus”. One of the things that has been a problem with compact digital cameras is that the tiny sensor in the camera gives all images a ton of depth of field (almost all of the picture is in focus). Digital SLRs are at a big advantage for their large sensors, you can have shallower depth of field so your subject is in focus against an out-of-focus background, making the subject really pop out of the image. Sony has come up with an amazing way to deal with this. In that mode, it will shoot two images in amazingly rapid succession, one in focus and one out of focus, and combine them in camera to make an image where the subject is sharp and the background is soft. It’s really great and easy, as seen here by a quick shot of my daughter. 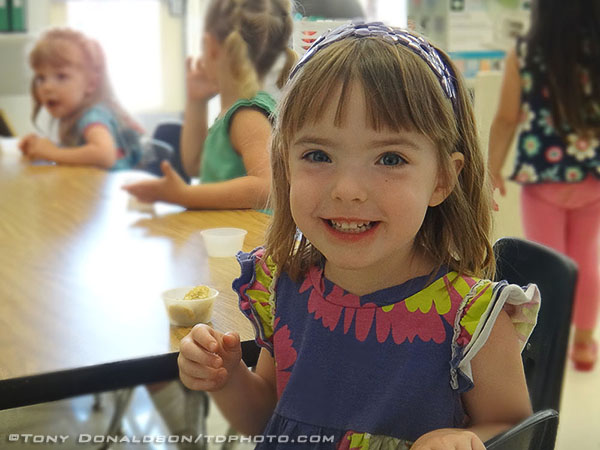 I like the fact that the camera uses ubiquitous SD cards. Sony used to make all their cameras use proprietary Memory Sticks. This one is almost standard on everything, except one. I forgot the charge cable one time, and looking at the connector I thought it was a Micro USB cable. Turns out it’s close, but not quite. Sony made a proprietary connector that LOOKS like a Micro-USB cable, but it’s wider. Those shenanigans need to stop, Sony. Stranding your customers when they could instead just borrow someone’s standard Micro USB cable is greedy and awful.

It’s summer time. If you shoot your kids or grandkids at the pool, you’ll love being able to keep this camera in your pocket or nearby and not worry if you go swimming with it, or it gets splashed, etc. It’s waterproof and shockproof. Kids splashing around? No problem. 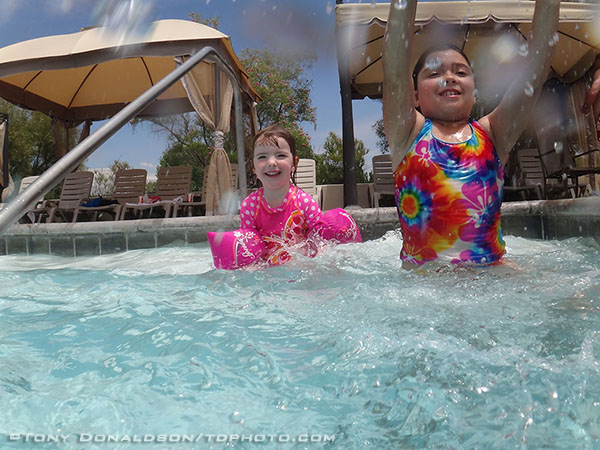 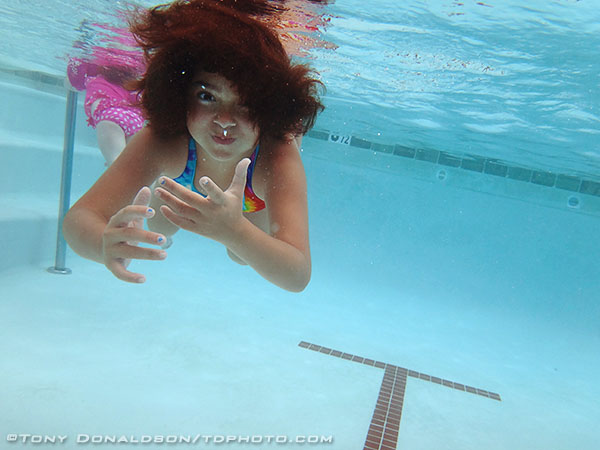 The kids will be amused, too. I let them play with it as well, they had a lot of fun shooting pictures of each other and I didn’t have to worry about the camera.

I took it a step further and tried it with professional model Victoria Parsons. Instead of using a bikini, we had the idea to put the model in a dress. She loved the idea. It wasn’t the easiest thing to compose a good image underwater, but after just a few tries, we came up with the main image for the article (above).

It’s not as responsive as a professional digital SLR, but those aren’t waterproof, and waterproof housings for those cost several times what the Sony TX10 costs and they’re really bulky. It’s harder to tell when you get a shot underwater, the camera doesn’t make a lot of noise.

When the LCD is wet, it is far less responsive, but it still works. Just takes a slower, more deliberate touch.

I tried the sweep panorama under and above water, it was REALLY difficult for me to make the camera move in a straight enough line for it to work. And when I did, the water’s movement caused really funky stuff to happen when the camera tried to assemble it.

Outside of the water, however, the camera performed brilliantly. The 3D sweep panorama is very easy to get to in the touch screen menus. Here’s an image shot at Vasquez Rocks near Los Angeles. It was windy, can’t you tell?

Even with the hair movement, the camera made it work seamlessly. For a 3D panorama, the camera has two files. The first is this one, the second one is a .mpo file that apparently works with 3D TVs. If you don’t have one, the first file gives you a really easy panoramic file that is 1080 pixels high by however wide you sweep it, even if you sweep a full 360 degrees.

Speaking of 1080 pixels, it shoots 1080i HD video, really easy to do. I was having so much fun shooting stills that I only shot one or two videos. The quality is really good, compression isn’t amazing but isn’t as bad as most smartphones by a long shot.

I was surprised at how easy this camera was to use, even with getting into the menus and picking how and what I wanted to shoot. The intelligent auto mode is really good, the panoramas are easy, and using it underwater is a VERY compelling reason to have this camera. If you have a pool or spend time at one or a lake, river or ocean, the TX10 is a good choice for active people.

It’s available in black, silver, blue, green, or pink. The black looks really elegant to take anywhere, but the brightly colored ones are easy to find if you leave them laying around somewhere, including the bottom of the pool.