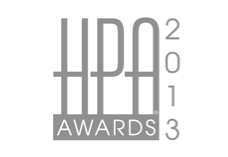 Hollywood Post Alliance® – the trade association for the post production community – has announced a stellar industry lineup of presenters for the HPA Awards next week. The event will unfold at The Skirball Cultural Center in Los Angeles, CA, on November 7th, 2013. The organization also announced that ticket sales are well underway and the event is expected to sell out.

The HPA Awards were conceived to recognize the achievements of those individuals who work behind the scenes, with ingenuity and creativity, to create motion pictures, commercials and television programming. The HPA Awards are the unofficial launch of Hollywood’s awards season, which culminates in the Oscars. Honors will be given in 12 craft categories covering motion pictures, commercials and television.

An all-star group of presenters will be on hand, including Todd London, SVP, VFX & Post Production Feature Films at Walt Disney Studios, Salvatore Totino, ASC, AIC (Frost/Nixon, Cinderella Man, Any Given Sunday), Stephen Rivkin, A.C.E. (Avatar, Pirates of the Caribbean trilogy), Dauri Chase (co-producer of the Newsroom, Post Producer at HBO Television) and Kevin Tent, A.C.E. (Nebraska, The Descendents, Sideways.) Former HPA Lifetime Achievement Winner Ted Gagliano, President of Post-production at 20th Century Fox, will be on hand to present honors in the visual effects categories. Special honors will be bestowed during the evening, including the HPA Engineering

Excellence Award sponsored by NAB Show.  The Charles S. Swartz Award for Outstanding Contribution in the Field of Post Production will be presented to Avid by Oscar-winning editor William Goldenberg, A.C.E. (Argo, Zero Dark Thirty, Transformers: Dark of the Moon). Louis Hernandez, Jr, President and CEO of Avid, will accept the award on behalf of the company.

The HPA Awards, held at the Skirball since their inception in 2006, begin with a pre-show reception, followed by a 90-minute awards show, and end with a celebratory cocktail party. The gala evening is an engaging and community centered event that brings out the entire post production community.

Tickets for the HPA Awards consistently sell out, and early purchase is highly recommended. 2013 HPA Awards show tickets are available at http://hollywoodpostalliance.org/.  For questions regarding ticket purchases call 213-614-0860 or write to [email protected]. Press inquiries should be directed to Christine Purse or Mimi Rossi at ignite, 818.980.3473 or email [email protected]

Hollywood Post Alliance (HPA) serves the professional community of businesses and individuals who provide expertise, support, tools and the infrastructure for the creation and finishing of motion pictures, television, commercials, digital media and other dynamic media content.

About the HPA® Awards