The price of 4K monitors is dropping fast, while the specifications go the other way. But not all that glitters is gold! 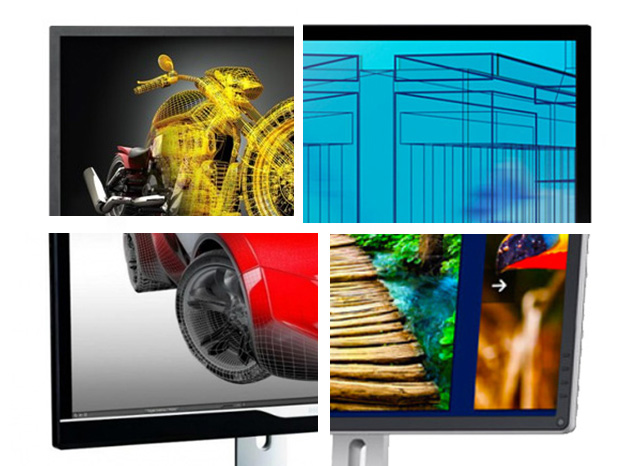 Here they are! 4K monitors for everybody on a tight budget, already under the $1000 many potential users define as the right price point to start looking for a new monitor. 2014 is the – first – year for cheap 4K monitors. And new models are announced each new week.

For this rundown we've settled for monitors with 28 inches and under $850. Yes, they are not full professional models, whatever that means, but they will do the job and not break the bank. Later, when your video business makes you a little fortune, you'll be able to look at more expensive – and suggestively better – monitors. But the models presented here will give you 4K at an attractive price.

If you take the route of 4K when it comes to video, does it make much sense to have a monitor that only does 1920×1080? It probably does not, because you'll be compressing your pixels in a smaller frame. So, maybe it is time to check the prices and buy a 4K monitor.  The prices have come down lately, and will keep doing so, while different manufacturers offer their best solutions for what everybody and their mother consider to be the new world in imaging. 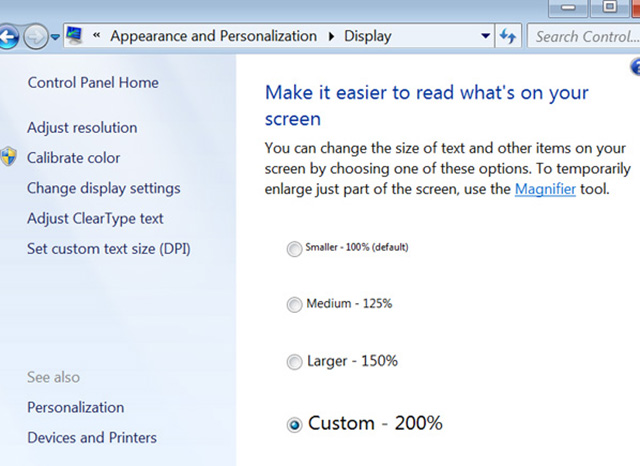 You may be tempted to buy a new monitor, with extra working space, but there are some caveats to think about before taking the jump. The high resolution, 3840 x 2160, will offer extreme clarity to pictures and text, but will also make your menus in tiny little things that make them difficult to read. This can somehow be sorted out, even in Windows 7 (and other versions, I believe), if you select  “Set Custom Size (DPI)” in your control panel, allowing you to go up to 200%, but expect to have some problems with the way some programs and icons display.

The idea of having extra space may be tempting, but do think carefully about it. Having extra pixels to work with also means that you'll need a graphic card that delivers it, so it is important, before buying a new monitor, to check if your hardware can work with it, without slowing you down. I do understand the appeal of using a large monitor –  I've worked for years on a 2560×1600 pixels, 30 inch screen, I love it, and would never go back to smaller screens, although many people consider it huge – but going to a resolution of 3840 x 2160 really means a big step forward. Make sure you NEED IT!

This said, 2014 seems to be the first year of 4K monitors at affordable prices. The quality is as mentioned previously, going up, and some of the new models use the latest 10-bit TN panels instead of the 6-bit TN which seemed to be the norm in 2013. In less than one year the TN panels jump from 6-bit to 10-bit, offering the same amount of colour that made IPS panels the quality reference. By the way things are going, 2015 is going to reveal some more surprises  So, without further ado, let's look at the new monitors on parade. 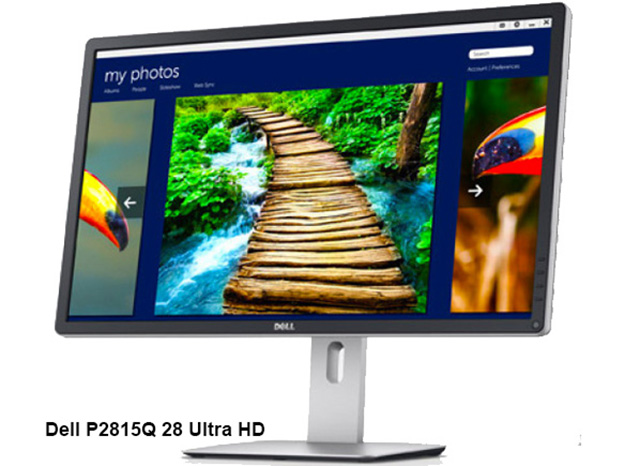 While the price point of the Dell P2815Q may sound attractive to many – less than $450 – the truth is that this monitor fails where it is most important. It can only deliver 4K at 30 Hz, a refresh rate speed that is not exactly what you would call acceptable these days. So, unless you need extra working space – and are willing to see your mouse jump on the screen besides living with the flickering of 30Hz – the 3840×2160 resolution of the Dell 28 Ultra HD Monitor is not the best option around, even if the price is tempting.

The difference in price to options like the Asus PB287Q may seem high, but in the long end it means the difference between a monitor that you'll grow tired of quite soon and one that you will keep for a long time. 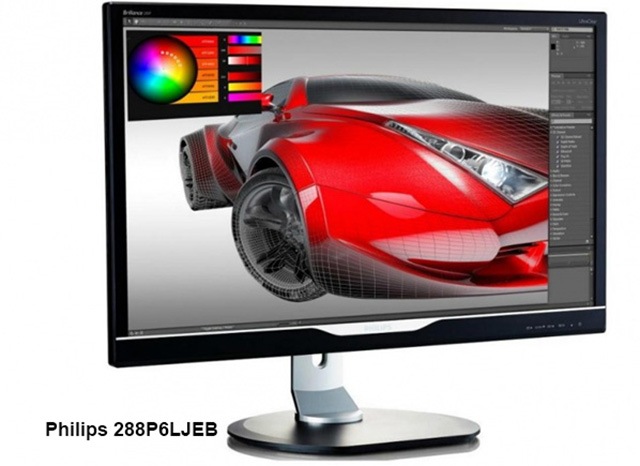 Philips 28-Inch 4K Ultra HD LED Monitor offers 3840 x 2160 resolution at 60Hz claims the company, suggesting this is another monitor to look for if you're in the market for a 4K solution. Price? $580, one more sign of the war that is going on regarding this segment of the market.

Philips offers MultiView display in this monitor. MultiView enables active dual connect and view so that you can work with multiple devices like PC and notebook side-by-side simultaneously, making complex multi-tasking work a breeze. 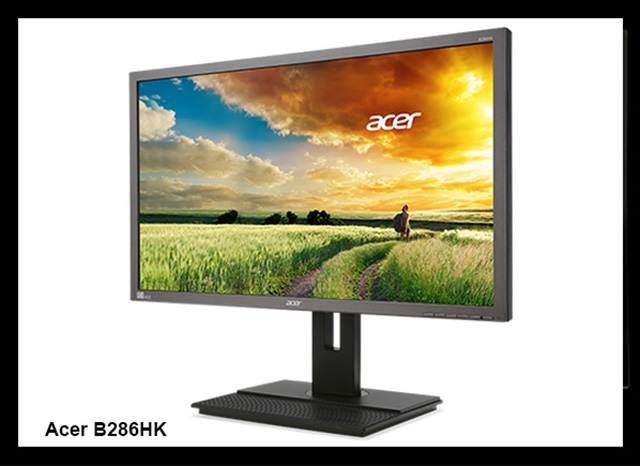 The Acer B286HK is a 28-inch monitor, with a  3840 x 2160 resolution TN panel (8-bit), LED backlighting, a 1000:1 static contrast ratio, and a 1 ms gray-to-gray response time, for $599. Some will look suspiciously at the 8-bit from the TN panel, but in fact, 8 bit + HiFRC tends to be the norm in many high-end consumer and professional displays. While there is a significant difference in price, the difference between 8 bit monitors with advanced FRC and native 10 bit monitors is so negligible that many manufacturers now simply refer to both technologies as 10 bit.

The Acer B286HK is presented as a Professional series monitor able to deliver dynamic and energizing visuals thanks to its high display resolution and true-to-life colours. The monitor also features an ergonomic design for comfortable all-day computing, and uses eco-friendly technologies to save power and cut energy costs. Connectivity is provided by an HDMI 1.4 port, DisplayPort 1.2, Mini-DisplayPort 1.2 and a DVI port. 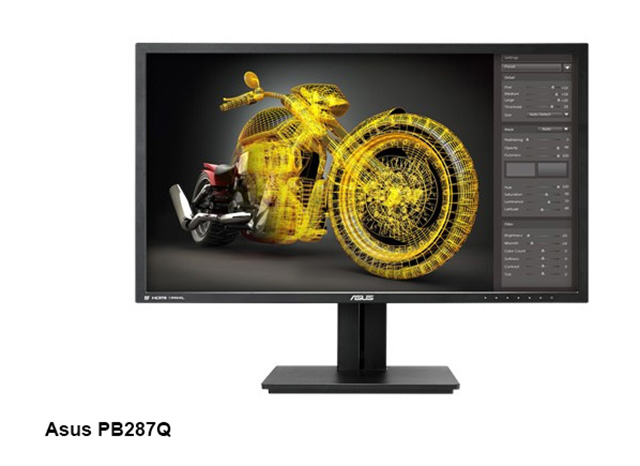 The Asus PB287Q has most of the things you expect to find in a professional monitor, allowing you to rotate it to portrait orientation, adjust height and even wall-mount it if you prefer. A thin panel and a refreshing rate that will allow you to do some gaming while not working make this monitor a probable good choice if you want to go 4K within a budget. 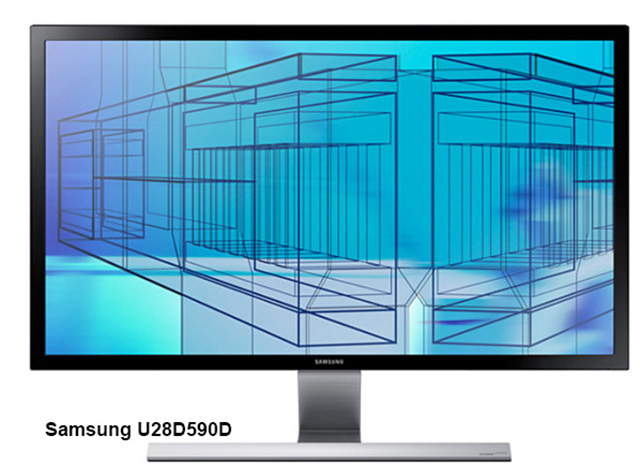 This is a true 4K monitor, with 3840×2160 and a refresh rate of 60Hz. The price is $699, showing it is possible to come down in price and still offer a logic and exciting set of specifications.

The U28D590D offers a lot of interesting options, both for professionals and for enthusiasts. One of them really explores the dimensions of the desktop: Picture by-Picture.

This advanced multitasking technology lets you do things you could never do before. With Picture-by-Picture, you can connect two PCs to the same monitor and see the desktops of both simultaneously on one screen that's divided into two. Thanks to PBP and the UHD resolution size you won't have to worry about losing any of the glorious picture quality and resolution. Plug in your laptop and your desktop and use both easily without needing to keep looking between different monitors – it's all there at a glance. 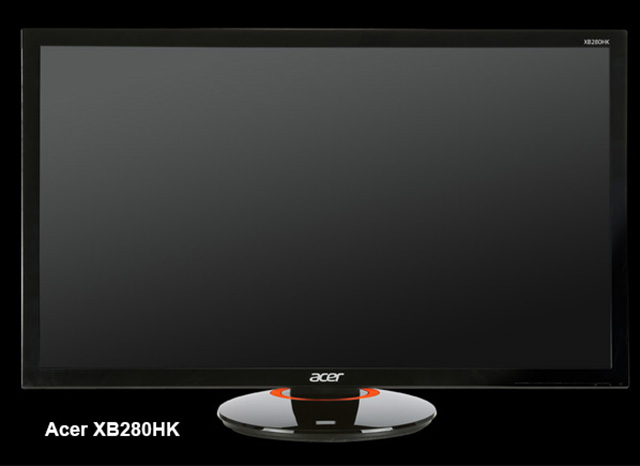 
Acer has presented what they say is the world’s first 4k2k display featuring NVIDIA G-SYNC technology to provide stunning, ultra-smooth, tear-free imagery and rich colours for outstanding gaming experiences (you need a nVidia card to take advantage of the technology). The monitor features Acer’s flicker-less, low-dimming and ComfyView technologies that reduce strain on the eyes for smooth and comfortable extensive viewing.

The examples above, which are just a fraction of the monitors announced in the last 3 or 4 months, should give you an idea of the 4K rush going on. And as we approach the end of the year it is only going to get worse… or better. Worse because it will make more difficult to choose, better because prices will tend to drop.

According to an Intel executive, Kirk Skaugen, senior vice president and general manager of the PC Client Group at Intel, mentioned by ITWorld, the price of “4K monitors will drop below $400 by the end of the year.” The announcement was made  announced during a news conference during the Computex trade show in Taipei, last June. Kirk Skaugen said that Intel was working “with ViewSonic and TPV (responsible for two monitor brands, AOC and Envision) to bring budget 4K monitors to market later this year”.

Should you buy a 4K monitor? Better, do you really need a 4K monitor? Although prices, or some prices, are tempting, the best decision is, unless you really need the extra space, to hold off on Ultra HD for a few months more, and see what the market offers. From January 2015 on there may be more models to choose from, and a clearer definition on prices and technology. It will also give you time to prepare a computer to be able to deal with the extra pixels. Remember 4k Ultra HD (3840 x 2160 pixels) has four times the resolution of 1080p Full HD.