With additional insight from Thomas Fletcher 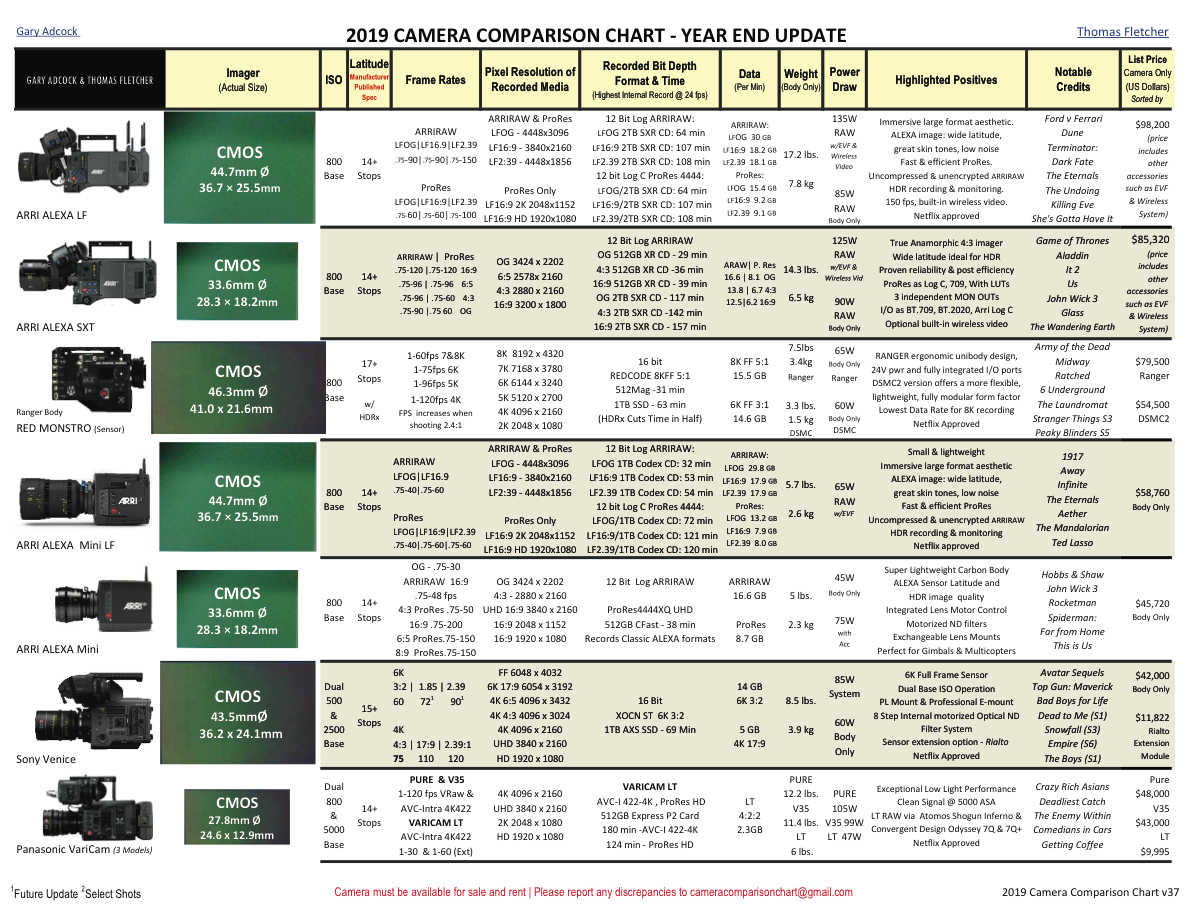 Compiled by Thomas Fletcher and myself with additional information and opinions gathered from conversations with numerous cinematographers, rental houses, and the manufacturers themselves, the Camera Comparison Chart is both a labor of love as well as a resource that is utilized across the industry.

From its introduction, the Camera Comparison Chart was designed to provide a tool to educate producers around the wide variety of tools that are available to them for content creation. For more than a decade we’ve kept up with updates to the Camera Comparison Chart but have kept it focused on mainstream production-centric cameras that are available for purchase and rental around the world. That’s the reason that cameras such as Arri’s Alexa 65 and Panavision’s DXL cameras are not included, even though those cameras are widely utilized in both television and feature film production.

The Genesis of the Camera Chart

Being relevant to the rental industry has always been our key focus. Tom’s former company, Fletcher Camera and Lens, was one of the most influential rental houses in the earliest days of HDTV as it provided education to both crews and productions. All of that laid the groundwork for the burgeoning delivery of 4K and HDR content. We’ve always felt that rental houses have been a focal point for advancing production technology in the film and television communities they serve. The rental houses are important because many new generation production cameras are often out of the price range most users could comfortably afford. Renting those cameras allows a wide array of users to access the highest level of cinematic production tools that could not have been achieved in any other manner.

When we started there was not a large amount of information compiled or published on cameras that were being used as part of most projects. Nearly all high-end projects were shooting film and the cameras were sometimes secondary to the film stocks that were used. The advent of digital production made everyone far more aware of the differences between cameras and each manufacturer’s product. Showing each cameras credit’s list allowed us to better understand what needs, requirements and looks we are trying to achieve for our own productions. We’ve all gone to a movie or watched a TV show and wondered what it was shot with. By allowing us to credit the cameras, those productions and their Directors of Photography were able to be highlighted, and supporting the manufacturer’s marketing efforts was a nice bonus.

The best example of that on the 2019 Camera Comparison chart is Canon’s C300MK2, where every credit listed for that camera was nominated for the Academy Award for Documentary Filmmaking. And yes, that’s every single film.

The relevant cameras on the list have changed multiple times over the years. For example, take a camera like Vision Research’s Flex4K. It is not any less of a camera than when it shipped, yet it is no longer on the current chart. Nevertheless, it’s still as viable a production tool now as it was when it was released.

The number of cameras is fixed. There is a fixed number of positions available, so cameras come and go regularly. The main reasons we limit the chart to 2 pages is simply about the time involved. Second is that many schools and rental houses print the chart out to hang in their prep areas. We’re open to expanding the length of the chart and feature updates for the zoom lens chart as well as one for anamorphic lenses, but that’s a large undertaking without financial support, which we’re open to discussing with the right vendor.

Tom and I have always thought the sensor sizing info is incredibly important, when we started there were still 2/3” sensors that used B4 mounts on the Varicam’s and HDCam’s. Now everything is mostly PL or Canon EF mount with Arri’s new LPL mount taking hold to bypass limitations as we zoom pass full-frame 35mm sensors.

We maintain the imagery to visually refresh peoples thought process. I use that info when I have speaking sessions to point out that Sony’s Venice is the only “true” VistaVision sized sensor based on the Academy’s published size. That RED’s Monstro and Arri’s LF sensors are larger than that does not take away from their capabilities anymore than choosing between 3-perf or 4-perf 35mm film stocks.

Understanding the Camera Chart and the Market it Highlights

As part of both our businesses, Tom and I regularly interface with the Product Managers, rental companies and selected DP’s about the ever-changing state of the marketplace. With every new camera model, we do the necessary research and then we hand off our best effort to the companies so the technical assets can be proofread. We list all our contributors on the release announcement to let our consumers know we strive to have the most accurate technical information possible and that it comes directly from the manufacturers and the rental houses we work with on a daily basis.

In closing, I am always being asked about upcoming trends that would affect our industry and the one I am seeing now is that sensors are getting larger. I expect them to continue to grow, but that does not really change things for the thousands of S35 imagers on the market. Without the physical limitations of analog film, larger format sensors and the corresponding data requirements will prevail. It was those limitations of size and weight that allowed 16mm and S35 formats to maintain such an extended lifespan. In the digital world we live in now, often the optics weight far more than the rest of the camera package combined. As someone that grew up making a living with 4×5 and 8×10 still cameras, having a cine camera that records on a 6×4.5cm sensor reminds me of the Hasselblad cameras of my youth.

On the other end, manufacturers are once again making smaller 2/3” sensors for broadcast solutions that need that extended depth of field and lensing capabilities those smaller sensors allow in news and sports. 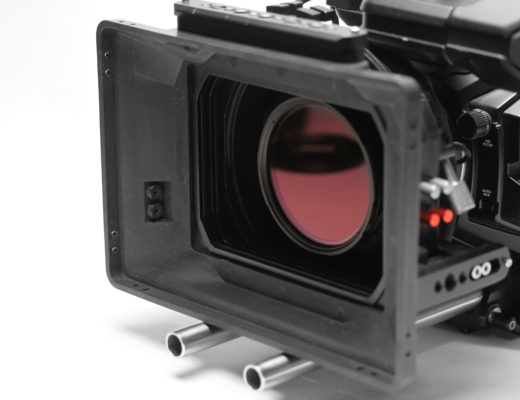