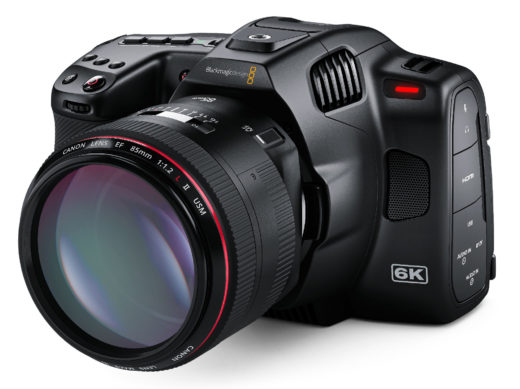 Blackmagic Design unveiled the Blackmagic Pocket Cinema Camera 6K Pro, an upscale sibling of the company’s Pocket Cinema Camera 6K that borrows a few features from the Ursa Mini Pro. The BMPCC 6K Pro is shipping for $2,495, a $500 premium over the original BMPCC 6K, which now sells for $1,995. To answer your first question, the 6K Pro has exactly the same 6144×3456 native-resolution Super 35 sensor as the 6K, with a claimed 13 stops of dynamic range and dual-native ISOs of 400 and 3200.

Just as important, maybe, is what you don’t get in the box. An extra $145 buys Blackmagic’s new Pocket Camera Battery Pro Grip, which bolts onto the camera and holds two extra NP-F570 batteries, essentially tripling your battery life. (A slide-out tray lets you pop batteries in and out while the grip is still attached to the camera bottom.) And for $495 you can buy the Blackmagic Pocket Cinema Camera Pro EVF, a glass-lens viewfinder bundled with four different eyepieces that plugs right into a port on top of the 6K Pro. It should come in handy when lighting conditions make it hard to see the on-board LCD — and, of course, some shooters just like framing up shots with an EVF.

Meanwhile, Blackmagic recently released the first big update for the URSA Mini Pro 12K via its new Camera 7.2 software release. New features for the Mini Pro 12K in this update include URSA Mini Recorder support and the usual variety of feature and performance improvements and bug fixes. A smaller 7.2.1 update added a better time-remaining display and tweaked the camera’s focus assist. Download it from the Blackmagic Support Center. 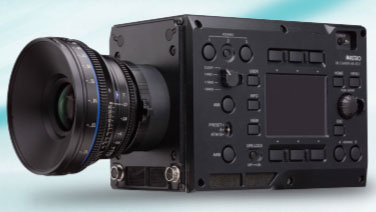 Designed for capturing live performances and sporting events, the boxy AB-4831 has four 12G-SDI outputs, a PL lens mount and global shutter operation. Astro says it outputs 8K UHD (7680 x 4320) at up to 60Hz and rates its 24.6mm x 13.8mm Super 35 sensor at 11 stops of dynamic range. Meanwhile, the AB-4830/AC-4829 system is distinguished by its compact design, with a 340g 65mm x 65mm x 80mm camera head (and MFT lens mount) suitable for side-by-side placement in stereo 3D rigs. The accompanying 5kg 3U half-rack camera control unit can be tethered up to 5m away with a USB-C cable carrying both video and power, or at up to 100m with an active DisplayPort cable (video only). Both cameras are compatible with Astro’s RB-4816-2 handheld remote control system.

Atomos enabled 12-bit Apple ProRes RAW recording for the just-launched Sony FX6 cinema camera. The Atomos Shogun 7 monitor-recorder can now record output from the FX6 via SDI at up to 4K (DCI) and 60p. Speaking of the FX6, Netflix has given it the thumbs-up, adding it to its list of approved cameras. More details are available in the FX6 Camera Guide at Netflix’s Partner Help Center. (Note that the FX6 is not approved for anamorphic capture.)

Fujinon expanded its Premista series of large format cinema zooms with a new 19-45mm T2.9 offering. The new lens sits at the wide end of the Premista line, which also includes a 28-100mm zoom and an 80-250mm telephoto zoom. Measuring 230mm long and weighing in at 3.3kg, it’s the most lightweight glass in the Premista line-up. Announcing the new offering, Fujifilm’s Tom Fletcher noted that COVID-era safety protocols have increased demand for high-quality zoom lenses that can match the look of primes, reducing the amount of time required for lens changes on set. The Premista 19-45mm T2.9 lens supports Zeiss eXtended Data for metadata interchange and lists for $49,900. 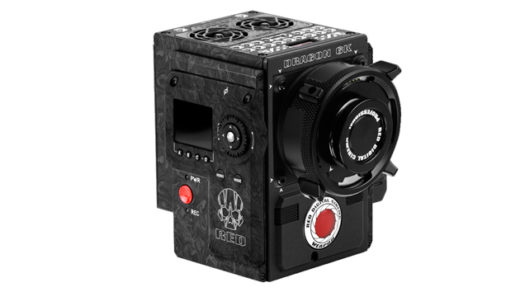 Do you have a collection of cameras or an arsenal of weapons? When you head into the field, does your gear look like a videographer’s kit or a soldier of fortune’s loadout? And what’s with all those skulls, anyway? The January 6 siege on the U.S. Capitol reignited a long-running debate at reduser.net about Red Digital Cinema’s design and branding. Some users say Red’s description of its imaging technology as an “arsenal” and use of skulls as logos promotes a culture of violence; others pointed to a long history of film technology borrowing terms associated with guns (shooting, loading and reloading, magazines, etc). And some noted that Red has already backed away from some of those terms. (The former Red Weapon, for example, is now just called the DSMC2.) But the debate raged, with one user calling the branding “stupid and juvenile” and another complaining that anyone offended by a skull graphic is a “snowflake.” By the end of the contentious, long-running thread, one reader noted that long-running pro audio website Gearslutz.com had just agreed to change its name after an online petition garnered nearly 5,000 signatures. Nobody expects Red to change its entire aesthetic on a dime, but it seems likely the company is poised to take a somewhat gentler, more inclusive approach to future branding decisions.

Executive producer Alex Williamson talked at length with the Go Creative Show podcast about “fighting for every little photon of light” during the production of Earth at Night in Color, a new wildlife documentary series from Apple TV+ that was shot entirely in darkness. Like its moonlit predecessor, Nat Geo’s Earth Live, Earth at Night in Color was shot with the super-sensitive Canon ME20F-SH, sometimes known affectionately as the “MoonCam.”

Judas and the Black Messiah, a biographical drama set in the late 1960s about activist Fredrick Hampton of the Black Panther Party, was captured by DP Sean Bobbitt with ARRI Alexa LF and ARRI Alexa LF Mini cameras and ARRI DNA LF lenses, which use vintage glass rehoused in modern lens casings. It premiered at the Sundance Film Festival before a day-and-date theatrical engagement and streaming berth on HBO Max. Read more at Variety.

DP Mark Patten shot Liam Neeson thriller The Marksman with the ARRI Alexa Mini using a mix of contemporary Cooke Panchro/i Classic lenses and vintage anamorphic JDC Cooke Xtals (named for Joe Dunton, the anamorphic imaging guru who rebuilt and rehoused them in the 1980s). Patten said he shot with the Cooke Xtals so the vintage glass would lend a “warmer feel” to the film’s New Mexican landscapes; as the feature transitioned into road-movie mode, he employed spherical Panchro/i lenses to get a more precisely focused image that would still match the panoramas he captured with the vintage glass. Read more from Cooke.