Panasonic’s PTZ cameras celebrate a decade of innovation, from the traditional box camera and pan-tilt head solution in 1999 to the new models, like the UE150, used in both AR and Virtual Reality. 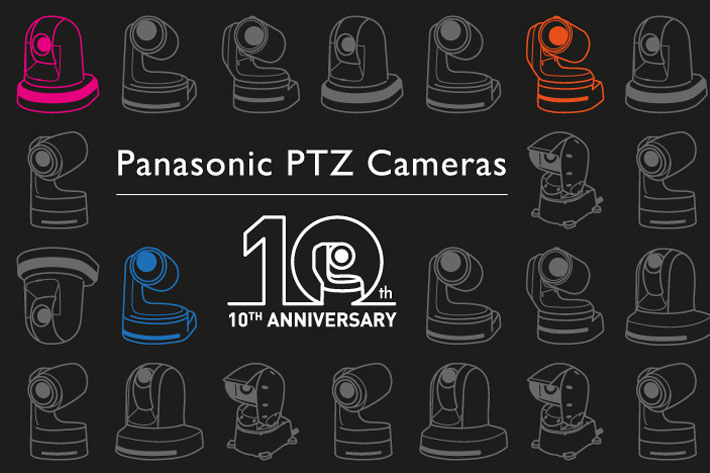 Panasonic shows at IBC 2019 the latest innovations in virtual and augmented reality, as a result of its collaboration with other companies. PTZ cameras as the UE150, play a key role in the demonstration.

Panasonic has been working with two of the leading players in virtual studio and augmented reality to ensure their systems work seamlessly with Panasonic broadcast cameras. The AW-UE150 camera is the first PTZ on the market to provide Position Data Notification (PTZF) and thanks to the adoption of the FreeD protocol, it is compatible with Virtual Studio and Augmented Reality applications and provides real-time positioning to the VR/AR engines. 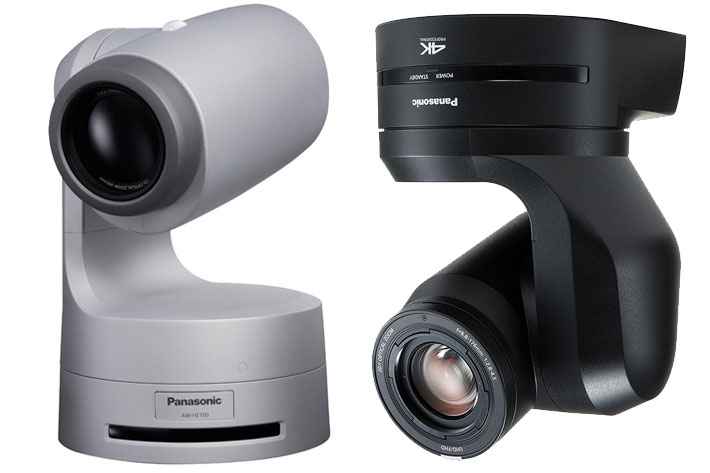 A decade of innovation

This all happens the same year the company celebrates  the 10th anniversary since the first PTZ camera, a traditional box camera and pan-tilt head solution launched in 1999, made it to the market. The anniversary marks a nostalgic journey of technology  which has since remained at the forefront of innovation. Panasonic shared some of the highlights of the journey in its professional website.

Kazu Masamura, Product Planning for Media Entertainment Business Division said, “Panasonic has been offering cameras and pan-tilt heads for many years. It was through this knowledge that we developed and launched a product which integrated a lens, camera, and pan-tilt head together. Over time, our experience has only improved, as we consider the needs of our customers to mould the direct of our innovation. We have challenged ourselves continuously, and developed better products along the way. As a result, I truly believe that today, Panasonic’s remote cameras range is a camera made by our customers.” 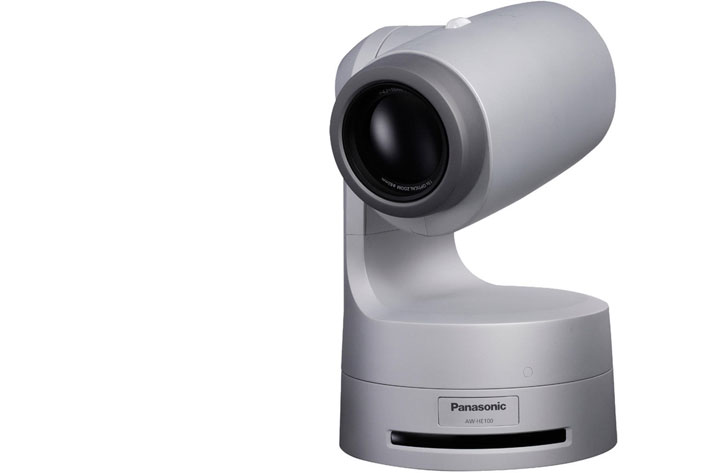 The journey of Panasonic’s PTZ camera line began in 1999, when Panasonic first introduced the traditional box camera and pan-tilt remote head solution with the AW-E600 and AW-PH300. These cameras became incredibly popular across studios and auditoriums around the world, with demand encouraging further innovation.

While these cameras offered exceptional image quality, the progression to an all-in-one solution was the obvious direction to improve the cameras functionalities. This lead to the introduction of the AWHE100, with key features including its smooth pan-tilt performance and direct RS422 control, alongside its HD/SD video capabilities and ergonomic design. Its success prevailed as the HE100 became the first integrated PTZ camera to be used in the Big Brother reality show, based in Spain.

The next development in the line-up was the creation of smaller dome cameras. In 2009, the AWHE100 was released to market with models in both HDMI and HD-SDI, supporting IP and serial control. This made the cameras well suited to video conferencing, evidenced by the integration of 17 HE50s and 94 professional displays in the University of Hawaii to support distance learning due to the geographical constraints of the island. 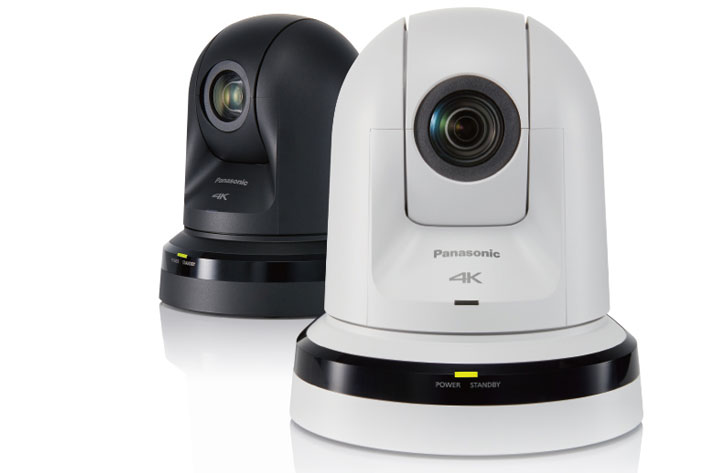 Black or white: choose the color of your PTZ camera

By 2011, the AW-HE100 was then upgraded by the AW-HE120 which was 60% smaller and lighter in design, with the same IP connectivity of the HE50. Including a new fan-less design, the PTZ camera usage also began to spread into different markets across the world, including parliaments and court houses which required minimal noise distraction during filming. To meet this rising demand, Panasonic also introduced the HE120 in black and white, a feature which has become commonplace in models to date.

Following on from this model, the AW-HE60 was introduced in 2012. This camera supported 1080/50p video, and was innovative for its simultaneous image output and control over IP. These functions became critical to the PTZ cameras success, and it was soon found across a range of fix-rig documentaries which included The Secret Life and BAFTA Award-winning Education series, to the development of Nursing Simulation spaces across two campuses in Australia. 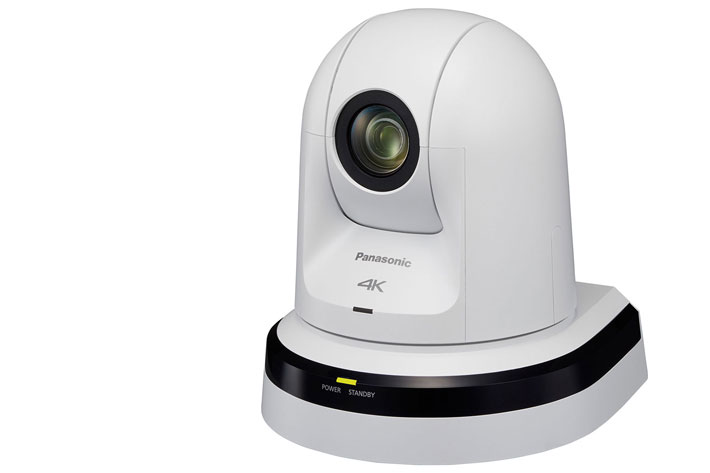 Reaching out into new markets at this time, the AW-HE2 was also introduced as a low-cost, fixed position HD camera which supported pan, tilt, and zoom control through image cropping. Due to its versatility and high image quality, it became a popular piece of technology in lower budget organisations, with Huddersfield University installing a total of over 250 cameras to support lecture capture.

The next major development in PTZ technology was seen as the AW-HE40 and AW-HE130 marked the latest upgrades to the HE60 and HE120 technologies. In particular, these new models improved the ease of the PTZ installation, with PoE+ supporting power, control and video over a single CAT5 cable.

In 2016, the release of the AW-UE70 then brought the world’s first UHD PTZ camera to market. As a cause of this, the PTZ range expanded into the live events market, supporting the likes of e-sports live streams and being used to capture Disney’s Broadway Hits in 4K. Disney were successfully able to picture-match the UE70 alongside both the VariCam LT and the AK-3000 live system camera, demonstrating the picture quality of PTZs.

Further product developments have also supported Panasonic’s market leading position in this industry, with the first IP65-rated outdoor PTZ in the AW-HR140 and collaborations with KST-Moschkau supporting outdoor housing units for the dome PTZs. In addition the optional update of the current PTZs to support NDI|HX enhances their IP-based offering. 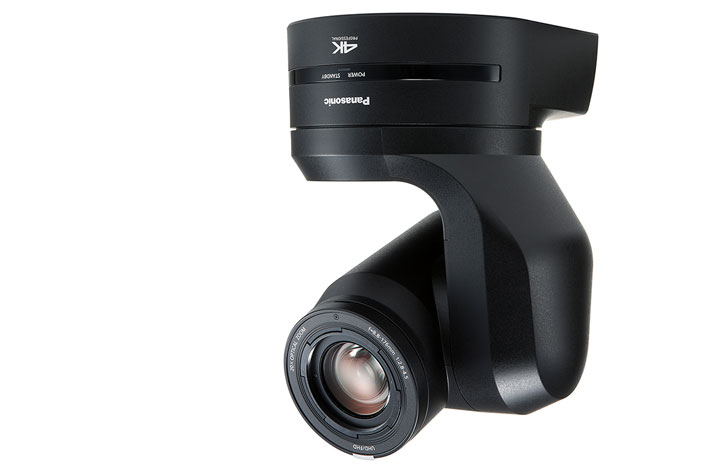 Today, the success of the PTZ camera range has been found in the latest flagship addition to Panasonic’s lineup, with the AW-UE150. Boasting a number of world firsts, this camera is the first PTZ capable of 4K at 50/60p, and the widest viewing angle for a PTZ of 75.1 degrees width. In addition, the camera supports 12G and fibre outputs, with HLG/BT.2020 support for HDR.

Munenori Miyaji, Remote Camera Project Leader, Media Entertainment Business Division said “When we develop our PTZ cameras, we consider three key elements. Firstly, we provide high image quality with natural colour reproduction to ensure that colour adjustment functionalities are comparable to our flagship studio cameras. Then, we consider the ease of its use, with the camera providing accurate movements and moving smoothly in operation. Finally, we provide end users with systems that reduce the costs due to the our workflow innovations. This can include switching from serial to IP control, a one cable solution to provide power, video distribution and control via a single CAT5 connection. In addition, it can include NDI and fiber, to help incorporate additional functionalities an reduce the need for an additional cable.”

Panasonic will be demonstrating, until September 17th, the latest innovations in virtual and augmented reality as well as slow motion replay broadcast capabilities at IBC 2019 as a result of its collaboration with leading industry players. The development of models as the UE150, the first PTZ camera to work with the FreeD protocol for Augmented Reality, meaning it can be used to support the development of virtual studios, open exciting options, and with the demand in PTZ technology only set to grow, the company looks to future innovations in years to come. 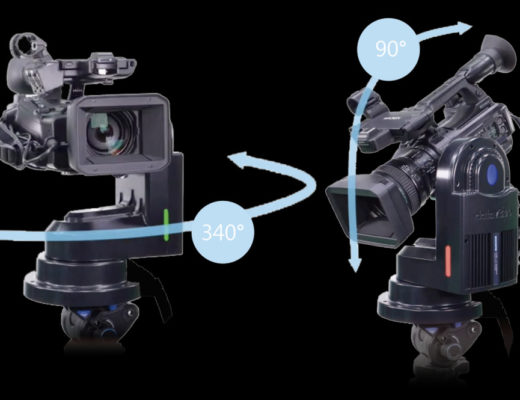 From its booth #N4120 in the North Hall at NAB 2022, Datavideo is showing its PTZ devices which invite...