Another look back, this time on the set of Titus 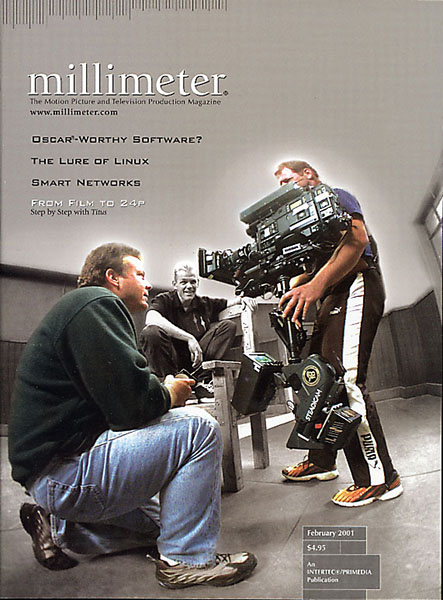 Millimeter was a good client and I’ve photographed a lot of interesting people for them over the years. They hired me to shoot some behind-the-scenes images on the set of Titus a few years ago. The significance was that the show was getting the first CineAlta cameras directly after the cameras were finished shooting George Lucas’ second Star Wars trillogy. Titus was the first sitcom ever shot with that camera, one of the first shot in HD.

I was working closely with the designers, Tony DeMoraes and Arthur Rumaya of element18 design. They were redesigning the look of the magazine and wanted to do a cover to reflect the way the show was shot. Chris Titus’ final scene of the show was shot with him sitting in a chair, and the whole scene was monochrome. Their treatment of it was to convert everything but the Steadicam crew to monochrome for the cover.

I arrived on set with my typical cameras, but decided to try shooting digitally. I was armed with a Nikon Coolpix 990. Yep, all 3 megapixels of it. It was an interesting camera, with the body/lens that swiveled independently. It was an early digital camera, but certainly not the technological wonder that the CineAlta was. But somehow, when the crew saw it in my hands, they all walked over and were oohing and ahhing over it. My little digital point-and-shoot. They had millions of dollars worth of digital gear, and my camera fascinated them!

That was great for me, since still photographers are often the least favorite person on a set. The camera had an electronic shutter, so it was silent. Perfect for shooting during taping. No blimp required. And though I’d turned off the built-in flash, I also put some gaffer’s tape over it just in case.

I was able to shoot during the taping of the show, and spent some time afterward with Chris and the Steadicam operators who filmed the last segment to get the cover shot. Chris was really a nice guy, and the discussion with the Steadicam operator and his assistant (who was pulling focus wirelessly!) was enlightening.

That may have been the first assignment I shot digitally, and I was completely hooked. The crude little Coolpix made me push its limits and learn everything I could about maximizing the quality of the images from it and every subsequent camera I’ve owned.