Unboxing the AJA IoHD, and setting up

I thought that for this next article series, I would take a look at Apple's biggest addition to Final Cut Studio 2, and that is the inclusion of their newest QuickTime codec, Pro Res 422 (and Pro Res HQ). Most editors might think “Big deal, I can already edit in HD, so why would I use Pro Res?”. Well, I'll tell you why. First of all, you get real-time HD capture across HD-SDI at 8 or 10-bit. You also get HD frame sizes at SD file sizes (in all major HD formats), you get a codec that gives you quality that is almost as good as codecs that you are currently using to edit HD with, and the best part is that you can edit in Pro Res 422 and Pro Res 422 HQ in the comfort of your own home on FireWire hard drives. Oh, and did I mention that because it's “Pro Res 422”, you are working in a true 4:2:2 color space? Until Final Cut Studio 2, Avid has thrown in our faces the fact that they have great quality, compressed HD for their editors to work with, and Final Cut editors don't. Well, not anymore. The big advantage we have over Avid editors right now is choice. We can choose the hardware we want to use as our input/output device, and Avid editors really don't have the choice. So that brings up a very interesting question. How do you actually get Pro Res into your system and edit with it? High end post production houses use MacPros that you can install HD capture cards into for all your editing needs, but what about the rest of us? Now I know that some editors might think that editors who don't use high end MacPros aren't professional, and are only working on corporate and wedding videos, which is completely untrue. I am currently working on thirty webisodes of a show that I am editing in Pro Res that will be shown exclusively on the web, as opposed to on television. Let's take a look at how professional editors can edit anywhere with AJA's IoHD and Apple's Pro Res 422.

O.K., here's how we're going to break this down. In part one, we're going to look at the IoHD unit itself. We'll take it out of the box, see what it comes with, what the unit offers as far as I/O, how it hooks up to your system and the installation process. In part two we are going to take an in-depth look at the AJA Control Panel (the ultimate I/O tool, for those unfamiliar with AJA's products), and in part three, we're going to look at capturing, editing and outputting with the unit. Let's take a look at this as if you had just ordered the unit from AJA, and it showed up at your house, ready to go.

To be honest, I'm horrible with dimensions. When I read on a website that something is 8.2″ W x 12″ D x 4.8″ H (the dimensions of the IoHD), it really means nothing to me. I need to see a picture comparison to get an idea of how big the unit is. When AJA shipped me the demo unit to do this article with, here is the box it showed up in. 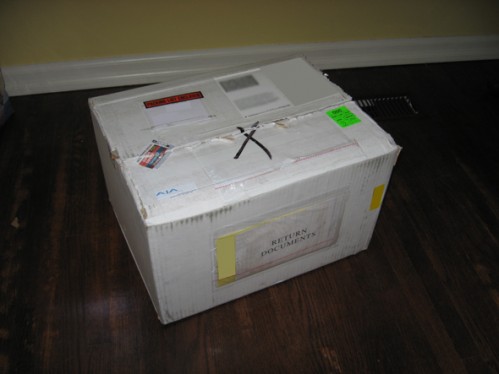 I was actually pretty surprised at how big the box was. But like a kid at Christmas, I gently and carefully opened (what I mean is get the box open as quick as possible without damaging it, as I need it to ship back to AJA) the box, to be greeted by another box. As you can see, this is the actual box for the IoHD. 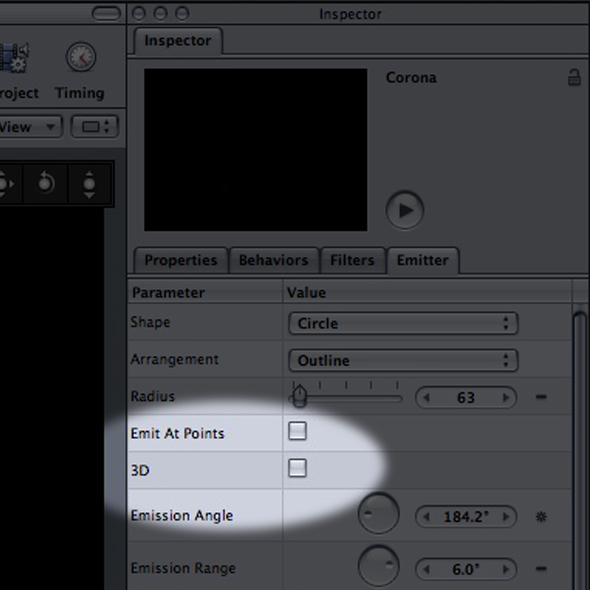 Now, opening the IoHD's box, we can now see the unit wrapped in plastic with a manual, two FireWire cables, a power cable and an installation disc. 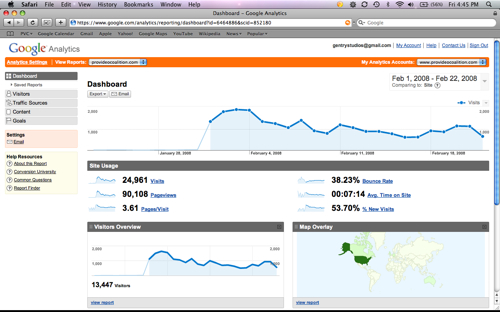 Taking the unit out of the box will give everyone a nice surprise. The IoHD is a compact, sleek looking unit that will fit nicely beside any CPU or laptop. (And don't worry AJA, the mug is empty!) 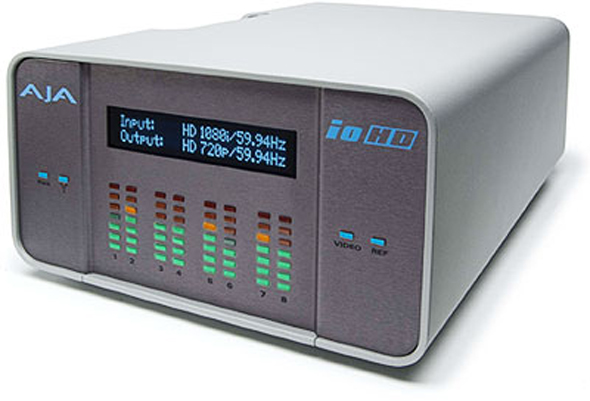 Now, let's get to the good stuff. Turning the unit around, you see that you have just about every video connection you could possibly need, which is awesome. The IoHD is a one-stop shop for all your capturing, monitoring and outputting needs. I/O's included are: 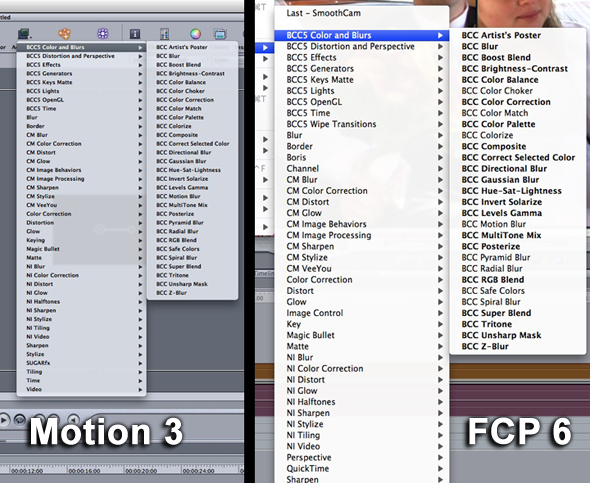 I was blown away that the unit has an HDMI input as well as an output. Great for monitoring, and great for capturing from lower end devices that have an HDMI output!

Turning the unit around to look at the front, you can see that there are some indicator lights, a digital readout, and some VU meters. 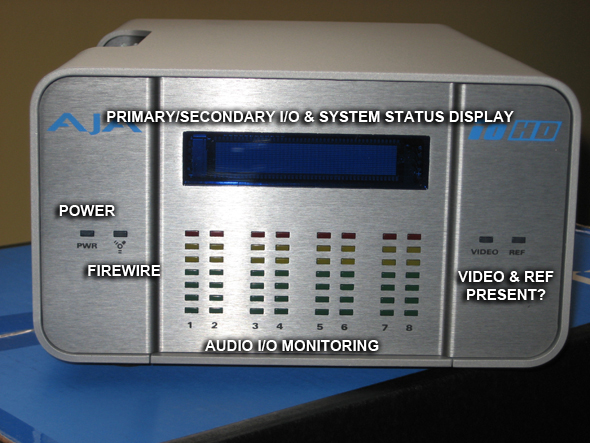 As you can see from the above, the indicators are there to give you the basic information you need to know to make sure that a signal is coming into the system (Power, FW, Video and Reference). The VU meters are also fairly self explanatory, but what about the display? I know that the system status portion is self explanatory, but what about the “Primary/Seconday I/O” that I mentioned in the diagram? Well, that's one of the best features of the IoHD. Besides its obvious features, the IoHD is also an up/down/cross conversion unit. What I mean by that is that if a director of photography shot all your footage in 1080i, and you need to work in 720p (Pro Res), the IoHD can do a real-time down conversion from 1080i to 720p for you, while you are capturing. I will explain more about this in the next article. This display will tell you what video format is coming in (Primary), and what (if any) format you are converting to (Secondary). As I said before, this unit is essentially a one stop shop for all your editing needs! One thing that is important to keep in mind is that, as you have seen, the unit has a FireWire 800 I/O on the back, so your system will need to have a FW800 connection as well, for you to work with it. AJA provides a FW800 to FW400 conversion cable, but in the ideal world, you would want to stick with FW800, as that is how the system is designed to be used.

INSTALLATION
Once you have the unit out of the box, and are ready to install the software, the first thing to do is to hook the unit up to your Mac. Next, take the installation disc, put it in your drive, and run the software package to install everything you need to get the unit up and running. 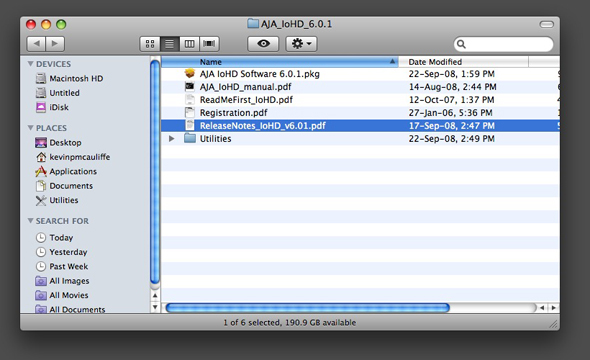 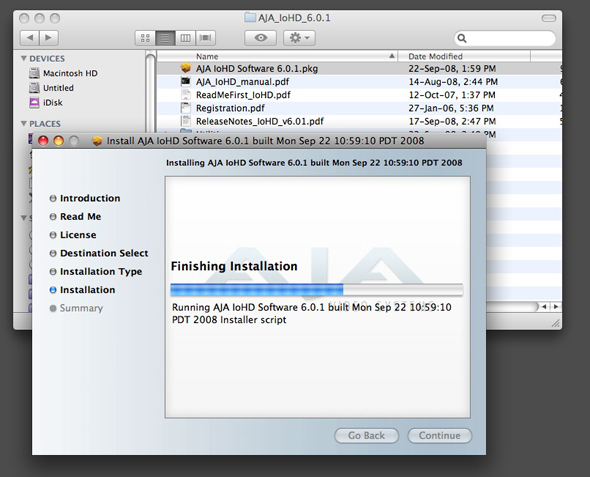 Normally what I tell editors using the devices is to first go to AJA's webpage, to the Support>Software Downloads page and get the newest drivers, as they have been updated as of September 22, 2008 to version 6.0.1 with fixes for:

As I had mentioned before, the IoHD supports pretty much all the major formats including:

Once installed, you will need to restart your computer, and once it's back up, if you navigate to the Applications folder, you will now see a new application and folder called “AJA ControlPanel” and “AJA Utilities” respectively. 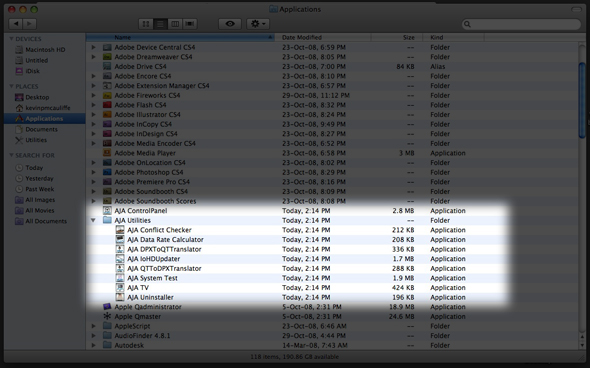 Also, I want to mention that in most cases (probably every case), you will need to update the firmware on the IoHD before you use it. There is nothing complicated about doing it, as once you have restarted, a window will appear telling you to update it. 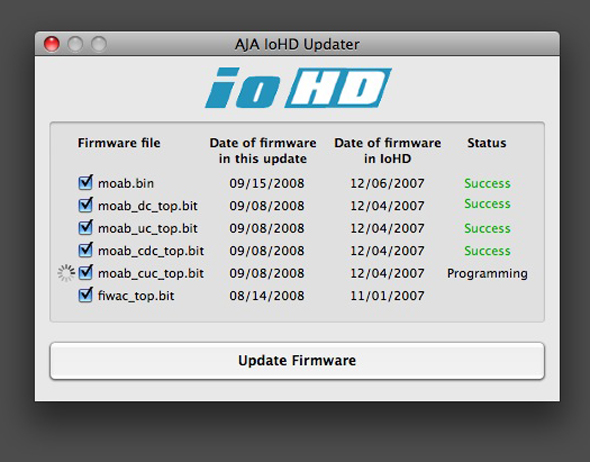 The great thing about the IoHD is that the front display keeps you informed about what it is doing every step of the way, so you don't need to worry when you see the wheel spinning for a long time! 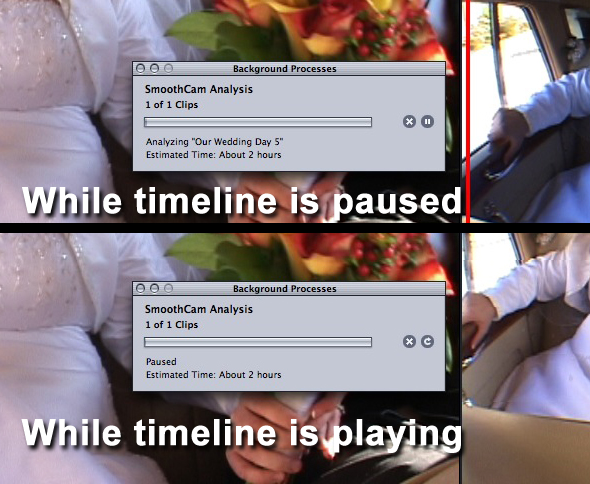 We're done! We are going to get more into the AJA ControlPanel and the Utilities in the next article, but for now, I can fire up Final Cut Pro, head over to my Easy Setup, and see that there are a whole lot more of them now, than there were before. 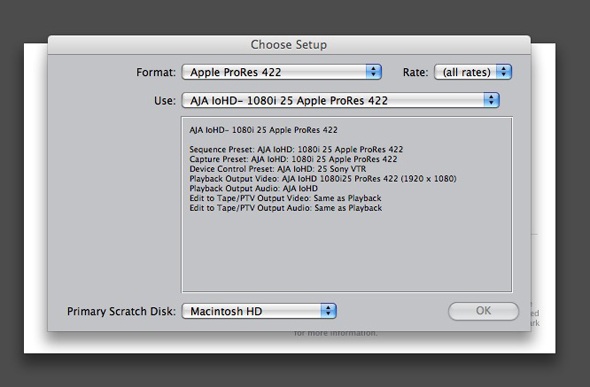 That's it for the installation of the IoHD unit. For our next article, we're going to look at the AJA ControlPanel, and why it will be your new best friend. For more information about the IoHD, you can head over to www.aja.com. To drop me a line about this, or any of my previous articles, you can email me at kevinpmcauliffe@gmail.com .

ART OF THE CUT WITH the Luis Carballar, editor of “Charm City Kings”

I was NOT going to panic. After all, I had bigger concerns. Like not being stranded on the Alaskan...