The makers of “Pirates! In an Adventure with Scientists” and “Shaun the Sheep The Movie “explain

The pros at Aardman have a unique ability to tell riveting stories through animation, which has earned the company a well-deserved worldwide reputation. Their award-winning work produces a unique brand of independent film alongside work for broadcast and advertising spots.

Recently, the company purchased a number of Canon EOS-1D X cameras to use in the production of Early Man, which will be their next feature. You can read the details around this decision via the press release below, but I was able to grab Tom Barnes, technical director and post production supervisor at Aardman, and ask him a few questions about how and why these cameras work for them and for their projects.

ProVideo Coalition: How essential is having a quality camera for the work that you do?

Tom Barnes: It’s absolutely essential. Not only does the image quality have to stand up on a cinema screen, but we have to have the very best quality of original image we can possibly achieve before we go through several stages of post production work on that image. Quality cameras give consistency in colour and exposure, which means a lot when you are shooting on 40 or more cameras simultaneously. Quality cameras are also reliable; essential when you are running them on live view for several years, every day, to allow your animators to subtly adjust character position.

Have you ever felt limited because of the tools you were using?

There are always limitations, because any selection of equipment has to be made as the best compromise – all cameras have their good and bad points, you choose the best balance. Working within a tight budget, we aim to provide equipment that will not limit the creative scope of a film.

Along this same lines, have certain cameras or other tools opened up new creative opportunities for you?

Certainly digital cameras have changed the way we shoot. Now we can project a finished shot within seconds of the animator completing it – which allows us to strike that set and move on, confident that there are no problems. And with the current generation of cameras you can really notice the improvements in image quality.

What would you say to anyone who isn’t sure if the EOS-1D X is a right fit for them or their production?

All jobs are different and you should always pick what’s best for your project with the budget available. 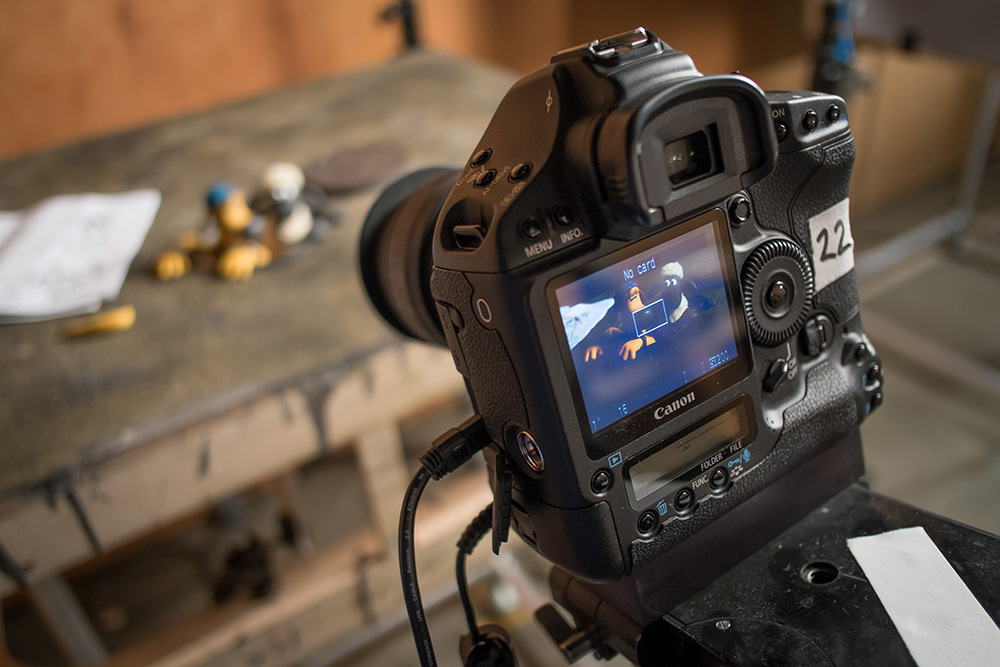 United Kingdom, Republic of Ireland – Canon UK has announced that it has sold 40 of its Canon EOS-1D X cameras to Aardman, the award-winning studio behind Wallace & Gromit and Shaun the Sheep. The units are to be used in the production of its latest film, Early Man.

Canon UK has been working with Aardman since 2009, and its EOS 1D Mark III cameras have been used to film two of its most recent features; The Pirates! In an Adventure with Scientists and Shaun the Sheep The Movie.

Due to the unconventional way that films are shot at Aardman, which can be a two year testing and production process, extraordinary demands are placed on its cameras. As well as being used for photography, the artists also run the live view facility through a monitor to get a better idea of how each frame looks, so the cameras are powered on and live all day.

“The main reason behind the decision to purchase the EOS-1D X was the extraordinary quality and reliability they offered,” said Tom Barnes, technical director and post production supervisor at Aardman. “Canon’s EOS 1D Mark III proved to be fantastically robust, so while we tested other cameras when deciding what to shoot Early Man with, we were happy to purchase the EOS-1D X because we were so impressed with the longevity and reliability of the previous model.”

Austin Freshwater, Director, Professional Imaging at Canon UK & Ireland at Canon UK said: “Aardman is renowned for pushing the boundaries of creative storytelling, and they use cameras in a different way to most filmmakers. Because of this, flexibility and robustness are key to their purchasing decisions, so it’s testament to the reliability and performance of our cameras that they have opted to work with the EOS-1D X on Early Man.”

Directed by BAFTA and Academy Award winning director Nick Park and produced in partnership with STUDIOCANAL, Early Man is an upcoming stop-frame feature film set in a dramatic prehistoric world and welcomes a cast of new characters.

The cameras were purchased through professional photographic services dealer, Fixation.

What does a director of photography shoot to take full advantage of a brand new 12K RGB sensor? Nature?...