When numbers get numbing.

This picture is worth at least a few words.

So much of the technical jargon around digital content creation is fraught with traps for the unwary. As we’ve previously written, an image sensor “pixel” is not the same as a recorded “pixel” and nothing about a 2/3-inch type sensor actually measures 2/3 inch. Another classic source of confusion is the seemingly innocuous ratio-such as 4:4:4-that expresses the digital sampling structure.

The Sony Tech Guy is hardly the first to notice that these numbers could use a little explaining. In fact, The Guy isn’t even the first on Pro Video Coalition to take up the question. Karl Soule posted a nice explanation back in June.

It’s an oversimplification at best to suggest that the numbers represent ratios of the color samples that make up the picture. This short-form answer papers over some significant gotchas.

Years ago, Internet chat rooms were abuzz with the relative merits of Sony® HDCAM® 24p recording (sometimes described as 3:1:1) versus Panasonic® Varicam® DVCPRO HD® 24p tape recording (sometimes described as 4:2:2). At the time, some commenters supposed that the “3:1:1” format must have fewer color samples than the “4:2:2” format. Because of different image sizes, it wasn’t and isn’t true.

Sometimes, the ratios aren’t even ratios. The three digits typically represent the ratios of the three color channels. So you could be forgiven for believing that 4:2:0 sampling for a Y/Cb/Cr signal means that the Y channel has full resolution, the Cb channel has half resolution and the Cr channel is missing in action. Bit heads among you already know that 4:2:0 means something else altogether.

How can we reveal the important differences that are papered over by these numbers? One of my Sony colleagues uses pictures.

Simply by eyeballing the chart, it’s clear we’re talking about RGB. The corresponding chart for 1920×1080 4:2:2 follows:

Clearly, there’s less color information. However, the human visual system is substantially less sensitive to color resolution than to Y-channel resolution. Unless the signal is put through heavy postproduction, the subjective detail is excellent.

Going to 4:1:1 reduces the color resolution in half yet again, as follows:

Compared to 4:1:1, 4:2:0 (below) redistributes the color samples for equal spacing vertically and horizontally. Now the Y, Cb and Cr rectangles all have the same proportions, as follows:

The result is that the nomenclature has lost any tie to sampling frequency and is applied to any image, regardless of resolution. In today’s crazy, mixed-up world, 4:2:2 describes all three of the following images: 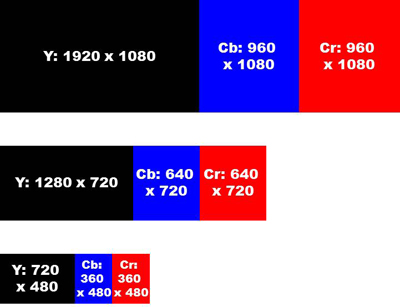 So next time you hear claims about 4:4:4, 4:2:2 and the like, we hope you don’t take things at face value. When comparing recording systems, you’re best served by considering the underlying image size and the actual number of samples being recorded. 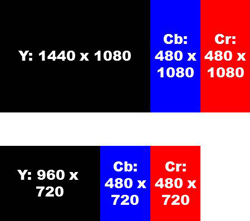