I admit it. This happens to me.

I had a frustrating scare of my own making recently when I went to boot Avid Media Composer on my laptop, outside of my usual office, and realized instantly as I clicked the icon that I had forgotten to deactivate my MC install at the office before I left. I began to panic as I knew I couldn’t go to the office to deactivate my desktop machine so I could then activate my laptop install. My first thought: Why can’t Avid do it like Adobe does?

I had a frustrating scare of my own making recently when I went to boot Avid Media Composer on my laptop, outside of my usual office, and realized instantly as I clicked the icon that I had forgotten to deactivate my MC install at the office before I left. I began to panic as I knew I couldn’t go to the office to deactivate my desktop machine so I could then activate my laptop install. My first thought: Why can’t Avid do it like Adobe does?

I’m sure many of us old folks out there remember the Final Cut Pro 7 days of having multiple installs but being able to only one run active serial number on a network at one time. I used to freelance at a post house that would often ask freelancers for their FCP7 serial number so they had to buy less seats. But subscription licensing isn’t that way.

While there are quite a lot of subscription-based tools in post-production today I’m only talking about Avid Media Composer and Adobe Premiere Pro CC. They are they two I encounter the most. I’m not sure how Autodesk, Gen Arts Sapphire or Red Giant’s subscription licensing works when you have more than one install activated so if anyone knows please comment below. Final Cut Pro X works under the Mac App Store model. As long as you’re signed in, download and go. I haven’t tried to have two identical FCPX licensed install running on a network.

How it should work: Adobe-style

The best thing I see about Adobe’s subscription is they allow two activations at once with their Creative Cloud licensing terms. I think for most that could mean a desktop and a laptop but I don’t think the Adobe mothership sees it that way. From the Adobe General Terms of Use:

You may activate the Software on up to 2 devices (or virtual machines) at a time, if these activations are associated with the same Adobe ID for the same individual, unless stated at http://www.adobe.com/go/activation. However, you may not use the Software on these devices simultaneously.

Beyond that Adobe goes one step further to help manage those licenses if you forget to sign out of one of your installs and you need to license another machine. 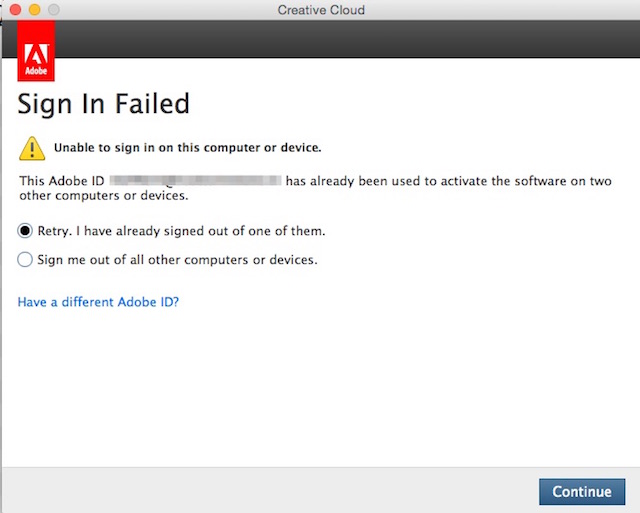 IMHO this is a perfect option, especially for a one man band, as it allows the license holder to kick all other install licenses offline and authorize the computer you’re standing in front of and need to use.

Media Composer is different in that it only allows one activation on one machine at a time (Avid does still offer dongles as a licensing option that doesn’t rely on internet-based activation). Avid’s licensing terms and FAQs about licensing are located here on Avid’s website. Some specific text about deactivation is worthing noting, from the Activation page:

What you’ll encounter if you try to license Avid Media Composer without deactivating your other license is this splash screen: 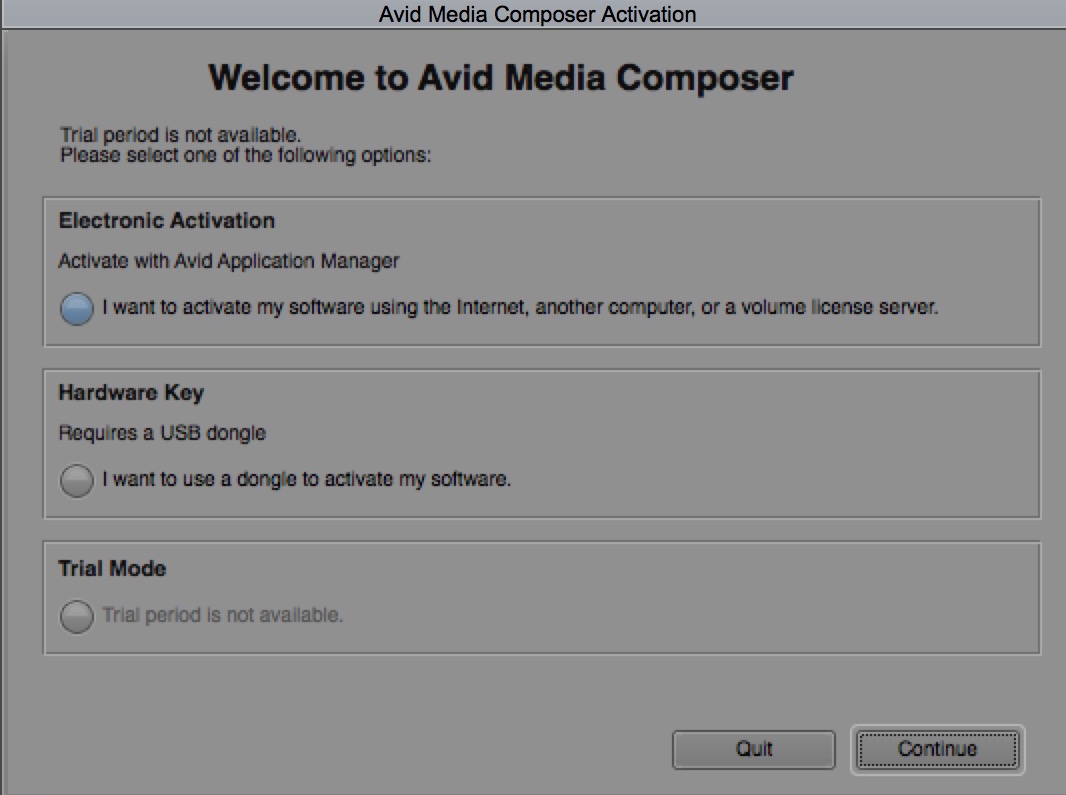 An easy option here is to just run Media Composer in trial mode as it’s fully functional for 30 days. If that isn’t an option then trying to license via the Avid Application Manager will result in a fail. 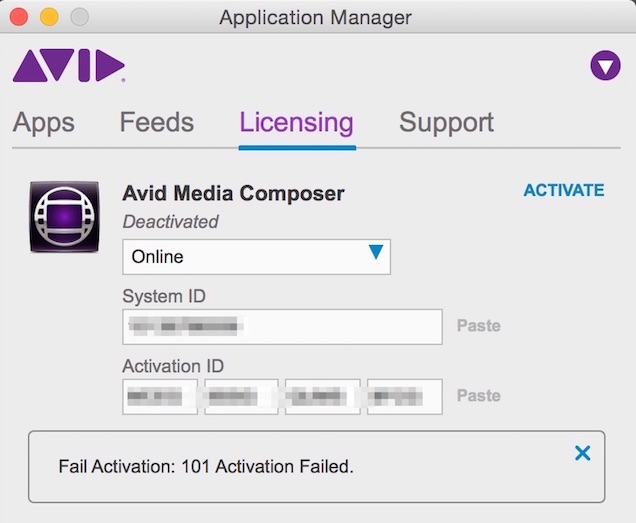 This can be disheartening as an owner of a license when you know your other machine isn’t using it … and may actually be turned off. In my case this was user error, totally my fault but I’m not the only one who wishes the Avid activation behaved more like Adobe. Like any software problem, I complained about it on Twitter.

@editblog Had the same problem yesterday.. they need to implement a deactivate option… ala adobe creative suite. terrible system.

But all is not lost. A call to Avid support is the key.

@editblog @mediacomposer if you call avid they will do it…

Avid Support can knock your activated install offline and walk you through activating the license you’re standing in front of. It was a very painless and very fast process and I was up and running in only a few minutes. 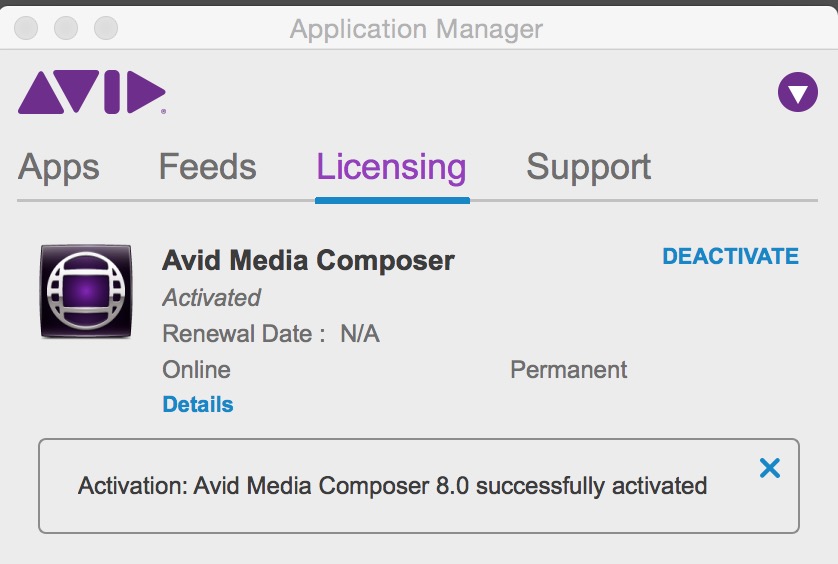 Subscription-based support calls don’t count against your support contract limitations but I don’t know if this process of having support deactivate one of your licenses is an “officially” supported thing that they are happy to do or just a by product of cloud-based subscription licensing. Thankfully Avid support was more than happy to help.

@editblog @MediaComposer @avidmarianna there really needs to be an option to remotely kick off all other systems… Like adobe.

The moral of this story is to remember to deactivate your Avid Media Composer license if you need to work on your other machine. Even the best of us forget from time to time. In a perfect world Avid would implement the two active machines rule like Adobe has. A slightly less perfect world would see the Avid Application Manager knock off that activated license.