While Apple may have stolen a lot of the buzz from NAB with their Sneak Peak of Final Cut Pro X at the FCPUG Supermeet, that didn’t mean that the rest of the industry sat quietly on the sidelines. 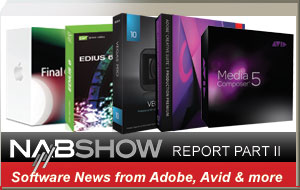 Avid, Adobe, Grass Valley and others all had their own updates to talk about. In fact, it looks like we’re entering the first stage of a war for marketshare among the three Big “A”s of editing, Apple, Adobe and Avid. While Apple fired the first shot with their FCPX Sneak Peak, Avid and Adobe still have plenty of bullets left and we must not forget about Grass Valley and Sony who have very viable offerings for the PC.

Avid didn’t wait for NAB to launch their latest version of Media Composer. In fact, version 5.5 started shipping a month before the show. This new version continues on the success and buzz that Avid created at last year’s NAB Show. Avid Media Composer 5 lived up to all the hype in 2010 and now, with version 5.5, it gets even better!

If you own Avid Media Composer 4.x or older, or Avid Xpress Pro/DV you can now upgrade to Media Composer 5.5 for only $595. That’s $300 off the regular $895 upgrade price and it includes the complete Avid Production Suite.

The second part of this limited time offer is attracting even more attention. Avid has announced a special Crossgrade Offer that allows anyone who owns Apple Final Cut Pro the opportunity to purchase Avid Media Composer 5.5 for less than $1,000. That’s right! If you’re a Final Cut Editor you may now get Avid Media Composer 5.5 Crossgrade complete with the Avid Production Suite for just $995 now through June 17, 2011. You don’t need to get rid of or stop using Final Cut Pro, you simply have to provide you serial number and proof of ownership.

Adobe announced the new Creative Suite 5.5 Production Premium software for PC and Mac that continues on the success of CS5 with new features and even better performance.

Mercury gets even more powerful.
With CS5.5 Adobe added a bunch of new GPUs to the supported list including the Quadro 2000, GTX 570/580 and a bunch of mobile Quadro GPUs which means that buying or building a computer that can take full advantage of Mercury is easier and more affordable then ever! Adobe also realizes that Apple has decided to go with ATI graphics in their newest laptops, desktops and iMacs. So Adobe has tweaked the Mercury engine to take even better advantage of the multi-core processors used in the latest Macs. While it’s not as powerful as with a CUDA based GPU, it’s still the most impressive performance yet.