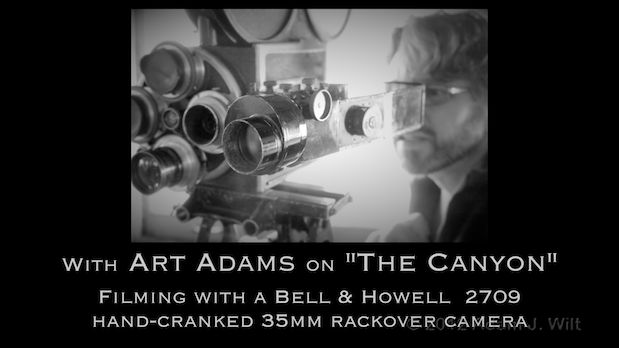 I shot motion as well as stills on the production of “The Canyon” last weekend, and I’ve assembled a short doc showing what it’s like to work with the Bell & Howell 2709 camera.

As with my earlier photo essay, this video complements and illustrates Art Adams‘s writeups of his work on “The Canyon”, a 35mm silent film being shot with a hand-cranked rackover camera built in 1922. So far, he’s described setting up and operating the 2709 and discusses the assistant’s tasks loading film and threading the camera, and I expect he’ll be writing more, too, as production continues. Have a snuffle through those articles; they are the context for and narration of this doc.

A couple of notes:

The whistling noise in the final minutes is the sound of the nearby steam engine idling.

It takes two and a half hours to fire up this particular engine; it’s not something you turn on with the push of a button. At idle, the engine has its fires burning and its steam at pressure; it’s operating, it just doesn’t happen to be moving. There’s the constant, harmonically-rich hissing of escaping steam; a deep, nearly subsonic rumbling and grumbling from the firebox and boiler tubes; and periodic sighs, blasts, and other noises as pressure blows off and condensation is purged.

Steam vents from the stack and the safety valve, and issues forth from other orifices, curling around the smoke box and running boards from which condensate drips like the sweat of an eager mechanical beast.

Stand downwind and you may experience an occasional warm drizzle precipitating from the airborne steam.

There’s an almost overwhelming sense of power and possibility in the steam engine; the sight and sound of the steam are reinforced by the THX-like deep bass rumbling. After last weekend, I can more easily understand how perfectly sensible grown men volunteer for operations like the Niles Canyon Railway: steam is seductive.

If you’ve never experienced it, do yourself a favor and visit your local steam railway at least once… while you still can. Like film shoots with hand-cranked cameras, operating steam engines are an endangered species. Pass up the chance to see one, and you may not get another.

I shot both stills and motion last Saturday with the Panasonic DMC-GH2, a micro-four-thirds mirrorless camera (the one camera I take when I’m taking only one, grin). All the video was shot with the Lumix 12-35mm f/2.8 zoom with in-lens optical stabilization. Audio was recorded in-camera with a Sennheiser MKE 400 camera-top microphone. One shot (Steve and Sprague filming the arrival of the train) was further stabilized in post, and opening/closing credits were reframed and filtered, but aside from those all the clips on the video are ungraded, unfiltered, and unprocessed.

Disclosure: No material connection exists between me and the Niles Essanay Silent Film Museum or the Niles Canyon Railway. No one has offered any payments, freebies, or other blandishments in return for a mention or a favorable review.

Many thanks to the cast and crew of “The Canyon” for allowing me to document a weekend of shooting.