Even more tools, tips, links and locations of stuff from all around the web

It’s been quite awhile since we visited the long running Useful Tools for Editors column and as I was going through my emails, saves, likes and bookmarked links the other day I realized it was time for another to take us into the long hot summer months (if you’re on this side of the world that is).

Conformalizer is a $500 change list tool for audio engineers to compare different picture cut lists (EDLs, XMLs) and “automatically conform and rebalance audio data to match a changed picture cut.” If you’ve ever had to do this manually you know what a pain this can be. I don’t think any of the audio mixing tools have this type of thing built in (though the old Soundtrack Pro tried to do it years ago with mixed success) so Pro Tools engineers might think this is $500 well spent.

I was going to type something that everyone reading this might be thinking but instead just click and play the first 8 seconds of the video above.

The 14 minute detail video will answer a lot more questions. While this seems to be targeted at audio post I’m wondering how picture might utilize it as well. DaVinci Resolve has some tools to compare two edits so if you’re doing finishing in Resolve, Conformalizer might be redundant but it just looks like a cool tool. The Cargo Cult has several audio post tools that any sound engineer might be interested in.

Not to be confused with Conformalizer above Conformist can be used to collect media files to move from one place to another … like say to a colorist for conform! This $40 utility (available on the Mac App Store with a free trial on a limited number of clips) will extract file names from an EDL or XML and allow for easier copying of those files to send to finishing. There is a blog post the developer posted that has some good detail on the whole conforming process as well as how this app can help. 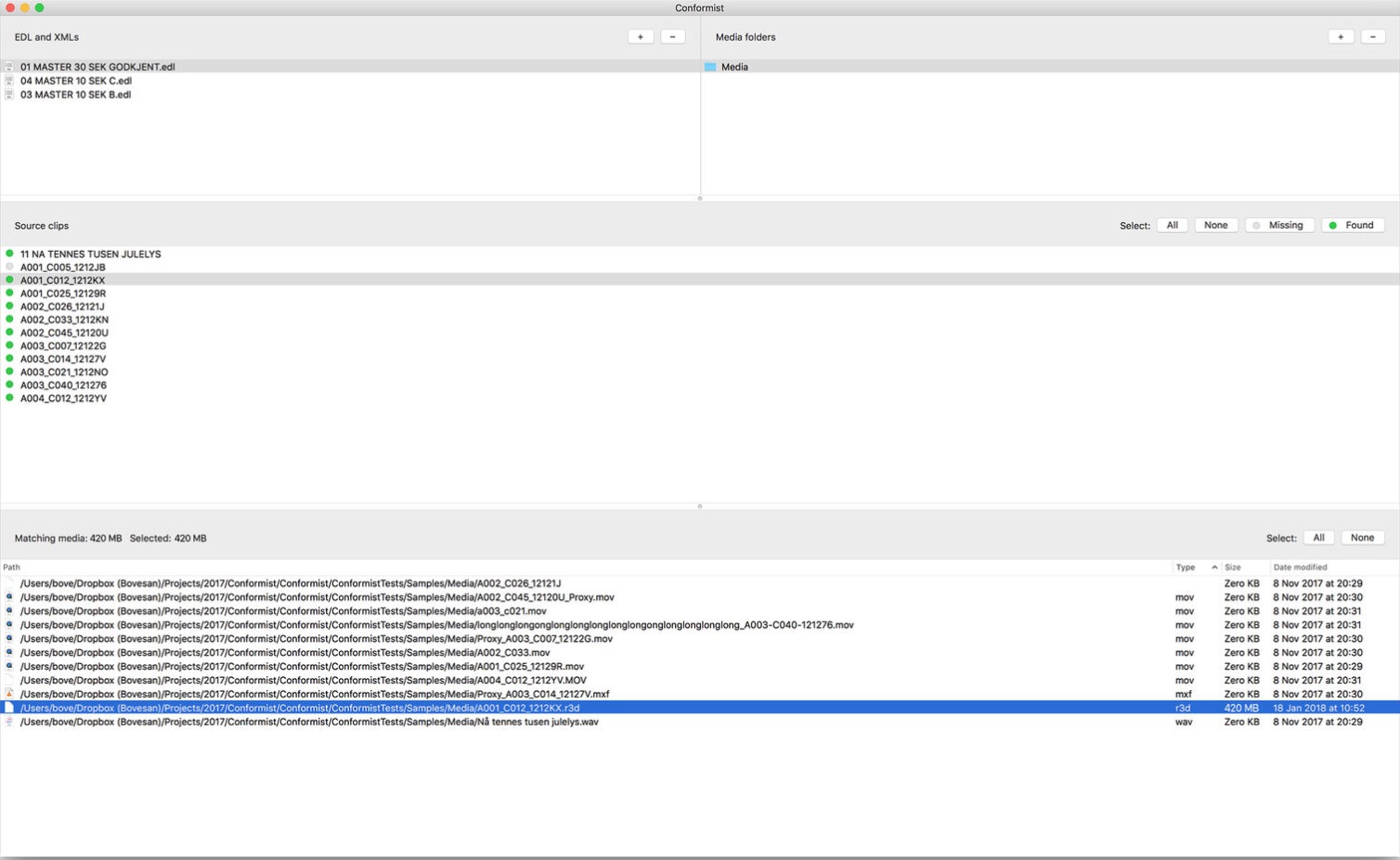 There is also an FAQ that any potential purchaser should read as there are limitations at to how it works but the free trial should help with those questions as well. This looks like one of those little tools that was developed out of one editor’s need to do something that was either impossible or too difficult. Automatic Duck used to have something similar a long time ago. We’ve mentioned EDL Spy before which is similar. 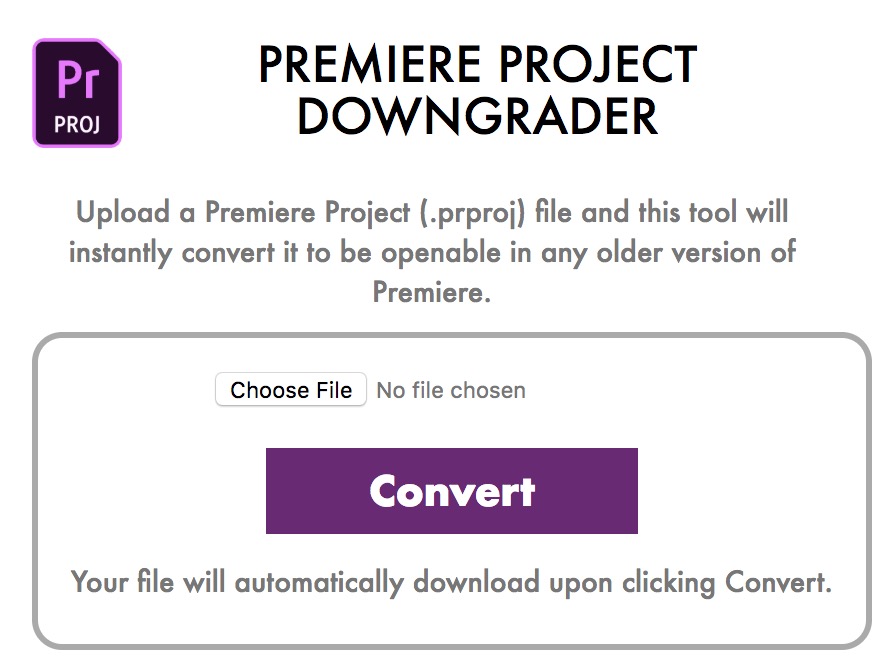 File this tool under probably not at all recommended by Adobe but I have to admit that I have used it in a pinch on a simple project. What does Premiere Project Downgrader do? Here it is straight from the website: “Upload a Premiere Project (.prproj) file and this tool will instantly convert it to be openable in any older version of Premiere.”

All the warnings apply here: this isn’t an official thing, some functions from the newer PPro versions might not work once downgraded, you may lose parts of your edit and there is a chance it might not work at all or you might think it worked and then find yourself screwed later. Use at your own risk.

It might work in a pinch with a very simple project not using many features – but it also may very well not work or dramatically lose parts of your project.

My favorite series on PVC!! Excited!@editblog You may wanna add to the online Premiere downgrader tool that it only supports files up to 2MB. Another limitation.

Wanna do it yourself? YouTube always has the answer! I’m always leery of any tutorial that spells Premiere Premier but I’ve probably done the same thing at some point so who am I to talk.

MediaInfo Mac has long been the go-to Mac app for revealing a lot of info about digital video files. But there is a new entry into the category in the way of a $4 app on the Mac App Store called Invisor. What’s interesting is that Invisor apparently uses MediaInfo for some of its work and then adds other functionality on top of it like: 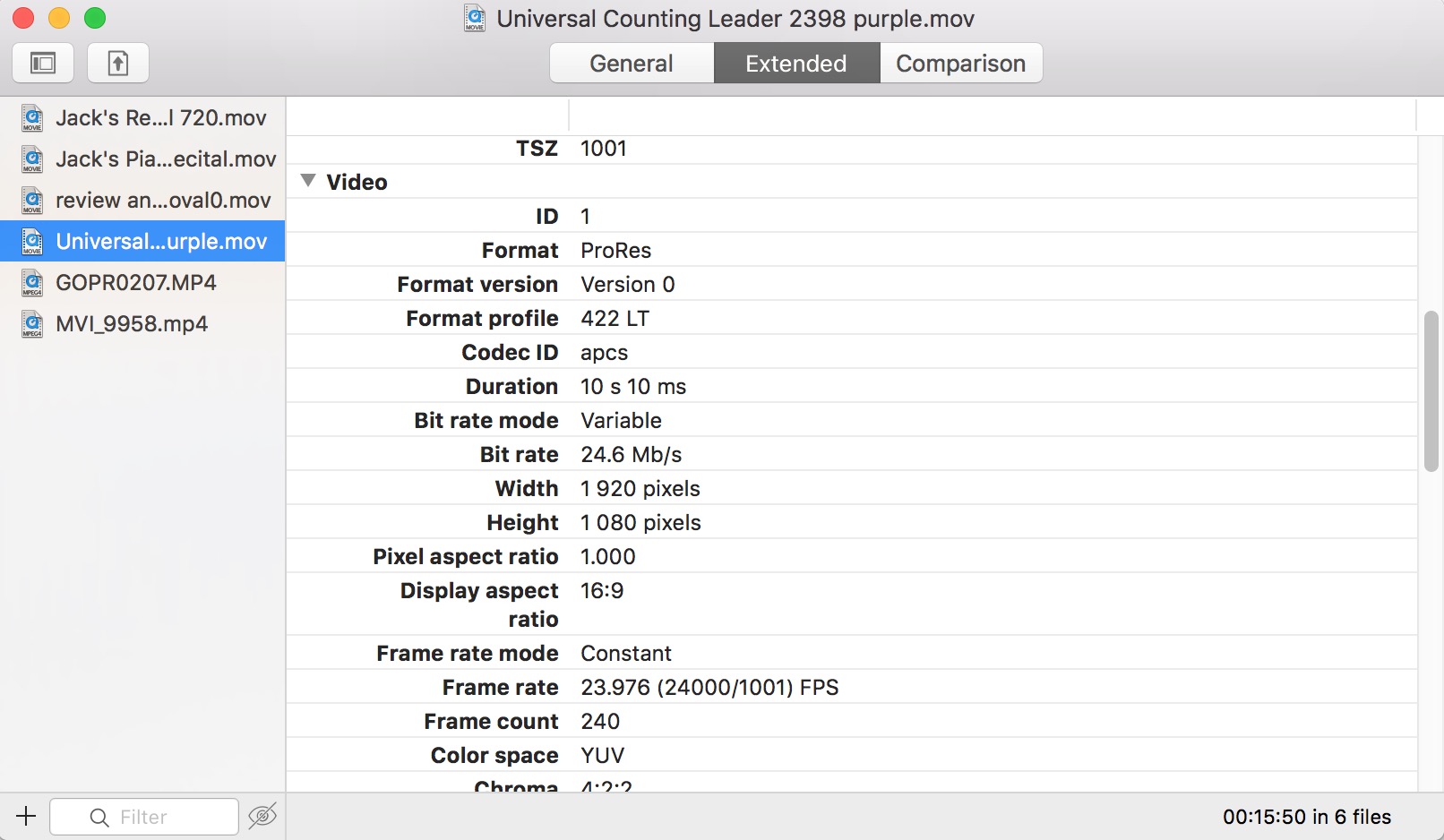 The image above is from the free Invisor Lite version which will provide a lot of the info on the files but without export and comparison functionality. Learn more at the developer’s website.

The BBC has released their 16,000 sound effect sound effects library to the world, free for “personal, educational or research purposes” as long as their license is met but they are also available for purchase individually if you want to use them for commercial purposes. That commercial link is actually showing over 28,000 sound effects in the BBC library. 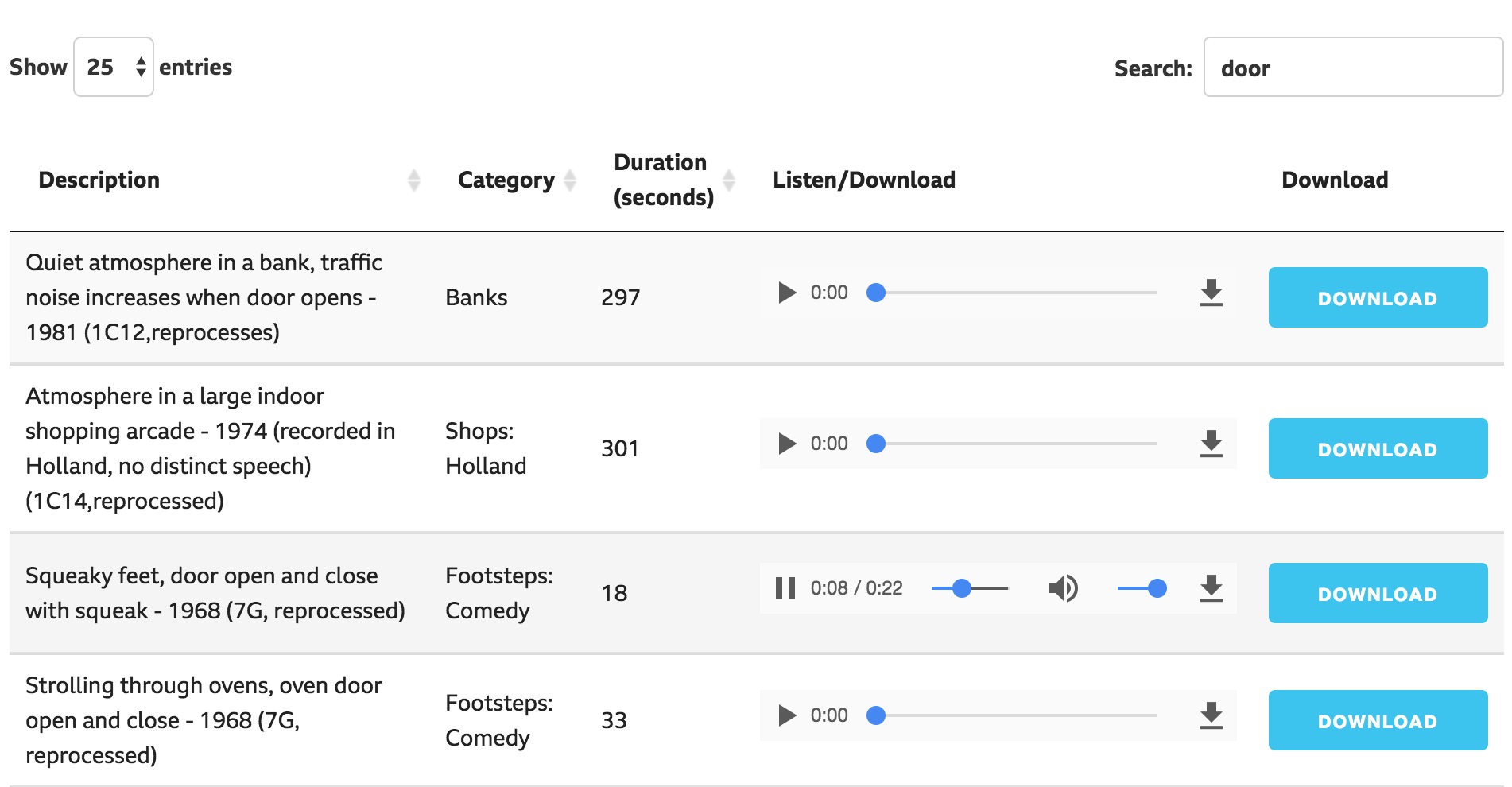 Above is the interface on the free site but if searching for commercial use you get waveform previews which is great.

Quick In-Out Revealer is an interesting little FCPX shortcut for reveling different items without key framing. It’s a free “plug in” from Tapio Haaja. He actually has several of them that might make you life in FCPX a bit faster and easier depending on what you need to accomplish. I don’t see an actual website for Tapio’s stuff as it looks like he is just using YouTube to distribute these freebies as there are links in the YouTube descriptions.

Yet another example of a very extensive community that has built up around the FCPX / Motion integration for creating effects and plug-ins using Motion and publishing those to FCPX.

Not to be confused with Automatic Duck mentioned above, FCPX AutoDuck is a little utility that will do automatic ducking of music under dialog. Both Media Composer and Adobe Premiere Pro have added audio ducking in recent versions where FCPX has not (to be fair though this is always easier in FCPX with the Range tool). But some enterprising utility maker came along and automated this with FCPX AutoDuck!

It’s a bit of an odd process only because you have to use individual audio files outside of FCPX to generate a new FCPXML that will then be imported into your Library with the ducked files but depending on what you have to do this could save some considerable time over a really long interview or live presentation. It fascinates me all the different kind of stuff that developers can do via FCPXML in and out of Final Cut Pro X. The developer is asking for a $2 donation for this app. They also have a few other tools that might be handy including one called Seek and Replace that says it is “pretty useful for After Effects renders or App development artworks.”

I’ve mentioned Cocoatech Path Finder many times before in this blog and they very recently updated to version 8. So spend the $40 to get things like bright Finder labels, quick access to panels and modules for doing tons of Mac stuff and easy folder syncing among tons and tons of stuff that Path Finder can do, all in one application.

I could type a lot about the new $40 Google Docs panel for Adobe Premiere Pro from the folks that make PDF Viewer but I’ll just let their tweet do it.

Introducing "Gpanel" – You can open and edit any Google Doc or Google Sheet. The best part of Gpanel is that you can edit the documents live right within the panel. Great for Scripts, Script Notes, Storyboards, Transcriptions and To-Do lists. @AdobePremiere @AdobeAE #Adobe pic.twitter.com/sTmqSROWmL

Links, tools, and cool things from around the web.

What frame rate should you shoot Godzilla at? Figure it out with Prolost Calc.https://t.co/bkkxENcVUj

Reference X is also working with @Blackmagic_News #DaVinciResolve. Export #fcpxml from Resolve and use it! Then you could bring the source files easily to the other machine. It's keep the directory structure.

The emotional journey of creating anything great requires crossing the dark swamp of despair..

I needed to make a video for New Light but nobody could agree on a budget. (MUSIC INDUSTRY amirite?) So I went to a place downtown and made this with a company that usually does birthday and Bar Mitzvah videos. Link: https://t.co/L0ZnOdqANz pic.twitter.com/uqRkhQZTnO

Watch “Node based compositing for editors” on #Vimeo https://t.co/zOY9uX2D3M

A 2-hour never before heard interview with Stanley #Kubrick from 1987 https://t.co/iTdHB1B5sR

Apple has posted an in-depth article on eGPU support in macOS 10.13.4. https://t.co/ZY05BXpsoP

Need to animate content in Final Cut Pro X without messing without keyframing position, scale, rotation or opacity? Check out my pack of 120 Alex4D Animation Transitions https://t.co/KpKYRSSIKT Thank you! #fcpx

Oh my god…Option+clicking this green button will maximize the window without going full screen (for when double-clicking the top of the window doesn't work). You have NO IDEA how long I have needed to know this. pic.twitter.com/q7IzCNuy7a