It doesn’t matter if you disliked Green Book, Bohemian Rhapsody, Roma, Vice or Kevin Hart, there seemed to be something to dislike about this year’s Oscar ceremony. If you were in Middle Tennesse then you might have been thinking about the flooding last week which wasn’t nearly as bad as the flooding the last time it flooded really, really, really bad. But no worry, here are more Useful Tools for Editors that might make the editing day better.

No doubt there are a ton of LUT and look collections out there. I’ve made fun of them before. This PixelTools PowerGrades Collection Vol. 1 collection is a bit different for a couple of reasons. First, the collection is for DaVinci Resolve, a place where you can and will do some serious grading and color work. Second, it comes from colorist Jason Bowdach, a post-production pro I’ve been following for a number of years on the Twitters.

One thing I like about the collection is that it includes a batch of Utilities that go beyond looks. Things like vignettes, compression artifacts, and scan lines can come in quite handy when you need them. They apply as nodes so you can dig into their construction and tweak to your liking. 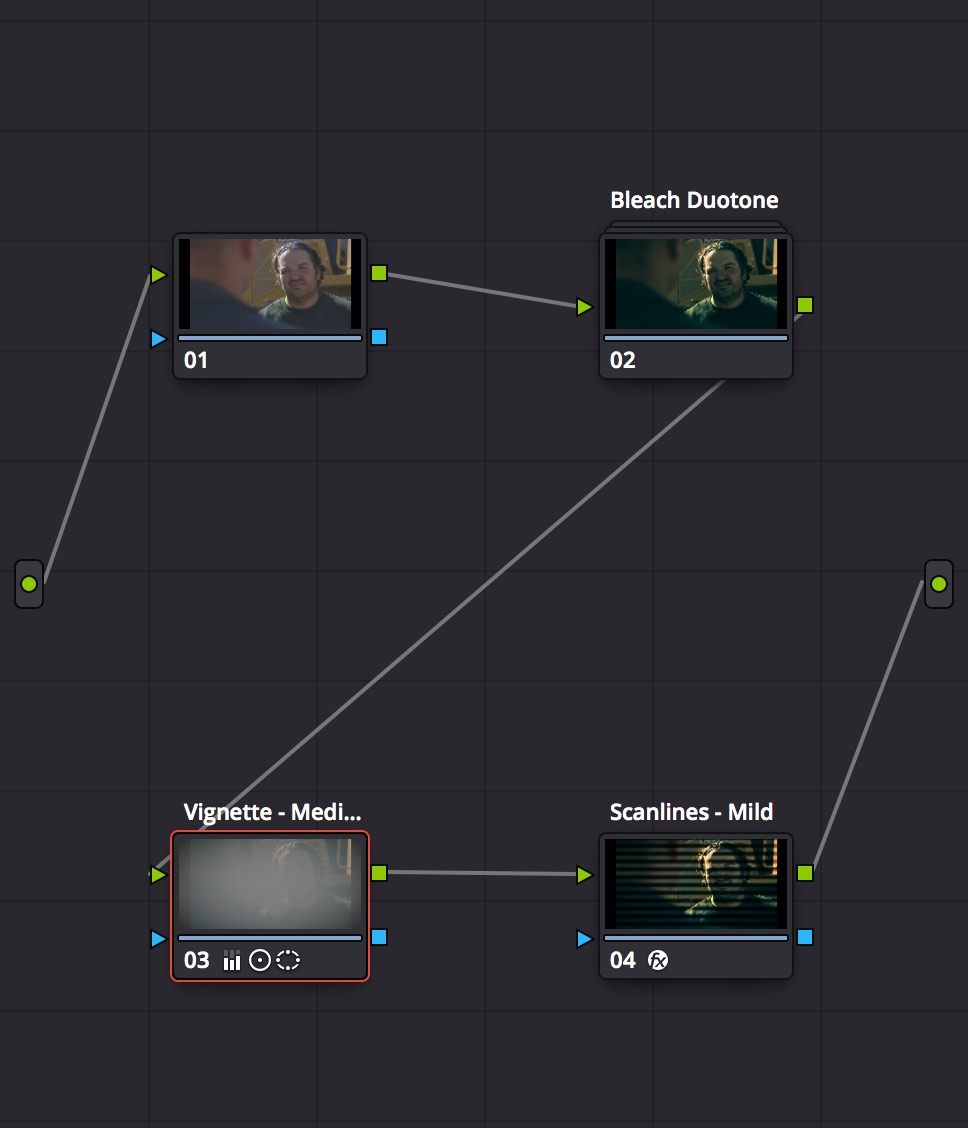 Are these things you could build on your own from within Resolve? Probably. But what is your time worth to you? In this case, it can be worth the introductory cost of $80 (regularly $99). You can also download a free sample to see what it’s all about and how the PixelTools PowerGrades work. Hit up the FAQ for more information.

MDV is a Free Media Management Tool for AVID Systems. Simple in its execution it’ll analyze the Avid MediaFiles folders on your hard drive and gives you a catalog of what you have. This tool has been around for a while but I didn’t come across it until recently. With the demise of the Media Mover by Random Video MDV seems to be it. MDV does have one major thing that Media Mover did not: it’s free. 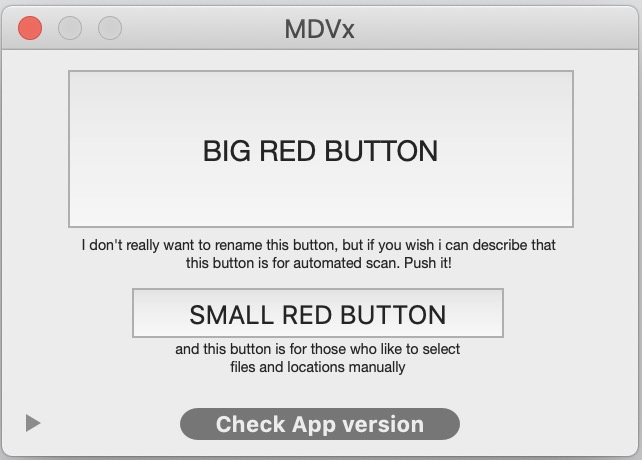 You don’t get much more simple than that for an interface! The BIG RED BUTTON is really all you need. I like apps with a sense of humor. 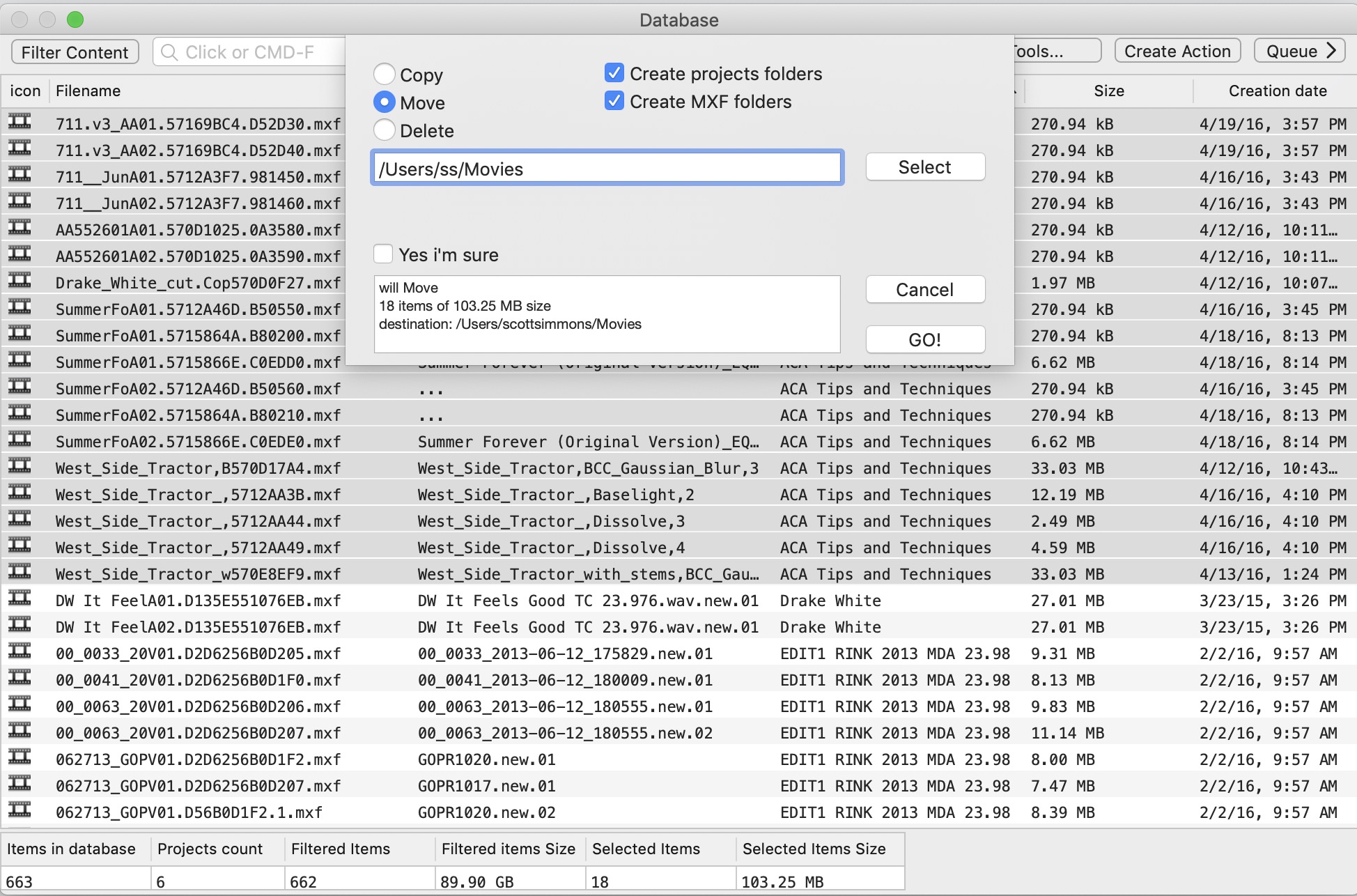 Once drives are scanned you get all the data about the data in your Avid MediaFiles folder. There are options to export the data to a spreadsheet or to HTML. Data can be filtered and sorted. But the best thing is that, like the defunct Media Mover, you can Create Action and copy, move or delete the data. It’s kind of like the Media Composer Media Tool but outside of MC and with a few more features. It can tell you the Kind such as imports or precomputes. 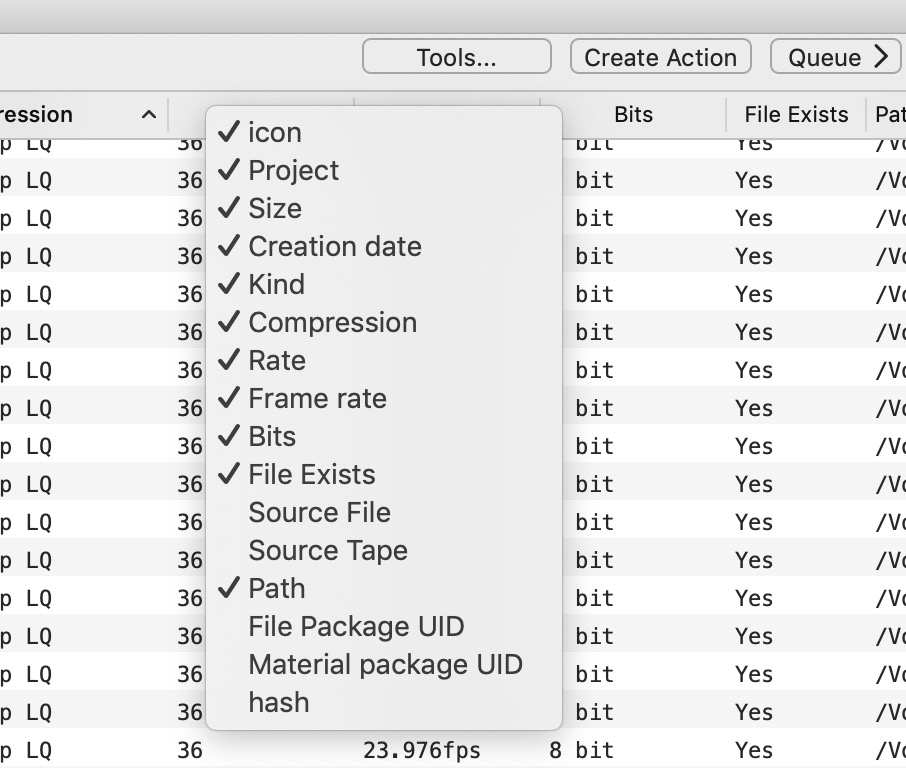 In fact, there are a number of columns you can view and sort by. Like in the Media Composer media tool, beware of files that have been orphaned or moved too many times as you might lose their Project association but a tool like this is still super useful to make sense of that Avid media. Double click on a file and it’ll be revealed in the Finder/Explorer. You could then use something like Telestream Switch or maybe a Finder Quick Look hack to see exactly what that file is. MDV is a great little tool.

Need a free (or affordable) basic media asset manager for PC? Then try Mync as the Mync Basic version is free until May 31, 2019. I don’t know anything about this tool (or if you can really classify is as a MAM) but if you read this article about it you might get a bit more detail. Mync comes from the Grass Valley/EDIUS folks and looks like it was/is a companion to EDIUS except that Mync and EDIUS software cannot be installed on the same computer according to the Mync website. 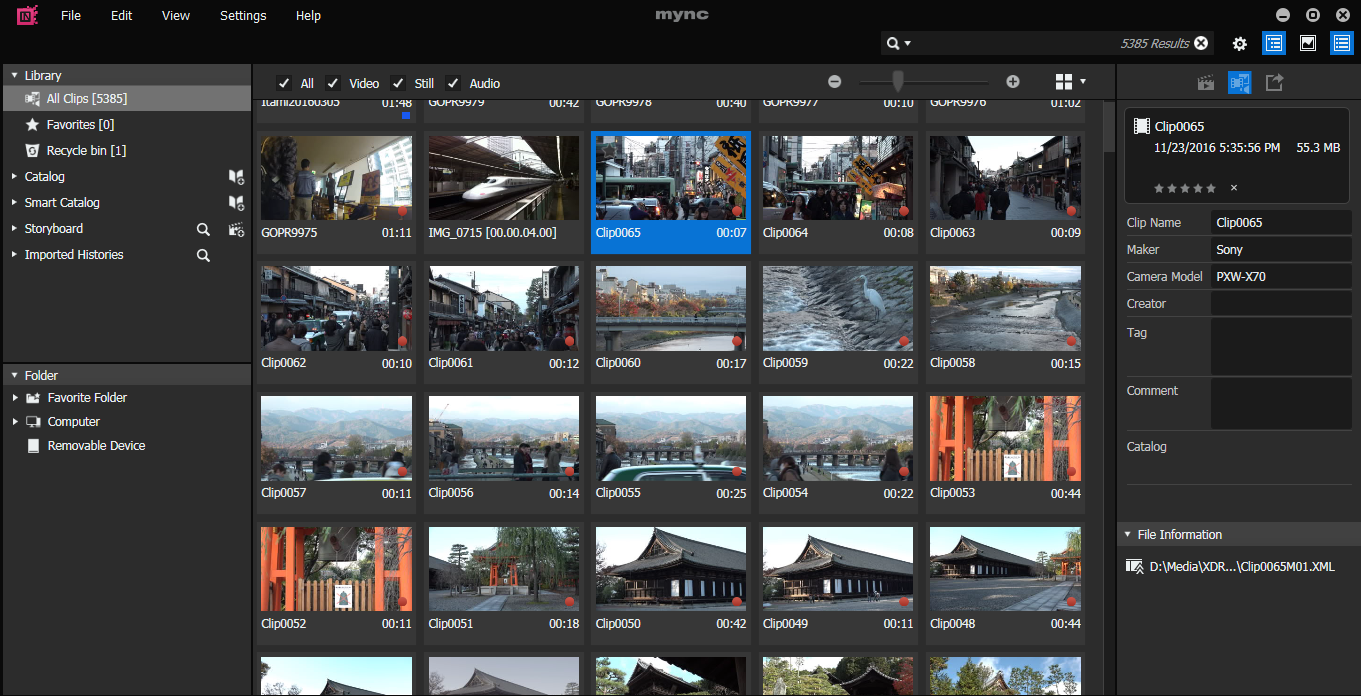 This image from the Mync blog is one of the few I could find. It looks pretty MAM-ish. Kind of like Kyno actually! If you wonder about the life of Mync you can check the version history to see how far it goes back and how it has evolved.

This image really seems to sum up Mync. It looks like it does a lot. This link to the actual Grass Valley site has a good feature list and a side-by-side comparison between the basic and standard version. I wonder why Grass Valley doesn’t market their tools any better than they do. Oh well. Grab that free version while you can and you might discover something new and really useful.

Speaking of Kyno, this is as good a place as any to remind editors just how useful Kyno can be as it has just been updated to version 1.6 adding features like RED R3D support and a ton of workflow enhancements. Don’t know Kyno? It’s only what is probably the most powerful, most full-featured, best supported, editor-focused media management tool out there. What is Kyno? will tell you all you need to know.

I love the “drilldown” feature that will look into folder structures and see all the media in those weird card formats without having to dig into each folder individually. It is a big timesaver.

And the important things for editors is there are various workflows for different NLEs built right in. That could be transcoding, metadata tagging, logging or sending NLE specific files right to edit.

I’ve been asked a few times why I’ve never written a full review of Kyno. The answer is this: Since I’m usually an editor for hire I’ve never been able to use Kyno as deeply as it deserves to be used for the kind of review I would want to do. I’ve played around with Kyno, kicked the tires, used it here and there but I don’t want to short-change this amazing tool by doing a half review. So I haven’t done it yet, instead of trying to just point it out for others to try. There is a free demo and different license models depending on your need (I kind of disagree with their “no subscription” text though… it’s just a yearly subscription instead of monthly though you can keep using Kyno years after you stop your license). I don’t think there are any other Useful Tools quite as useful as Kyno outside of the NLE itself.

The caveat with any tool that has hack in the name is this: use at your own risk and backup, backup, backup. That said, Adobe Apps Hack Tool is billed as The swiss army knife for Premiere. What all can it do?

We’ve got project version conversion, sequence modifying, LUT transfer, offline clip searching and an “XML unpacker.” That’s a lot of stuff. We featured a PPro project downconverter before from N Town Productions but this app takes it to the next level. While it’s a Windows tool the website says “it runs also on MacOS via WineBottler.” I don’t know what WineBottler is but that’s cool.

It also says “this can all be done with AdAPP without actually opening Adobe Premiere!” I don’t know what AdAPP is or if this might be violating and Adobe EULAs or not so, again, use at your own risk. It looks quite interesting that they seem as if they can look inside an Adobe Premiere Pro project file. I wish someone would make such a thing for Final Cut Pro 7 Classic!

Ripple Edit (for After Effects)

Do you ever have to actually edit in Adobe After Effects? Of course you don’t as that would be insane. But if you have to then you might want to consider the $25 tool called Ripple Edit (not to be confused with Ripple Training, the other ripple named post-production thing). It’s actually quite a brilliant idea to add some editing familiar tools right in After Effects as there are times it makes a lot more sense just to keep your comp in AE instead of heading back to Premiere to make some changes.

This quick start guide above is a great overview of the tool. A few of the features: In point, close gap, delete, active time, to comp and more. What do those things mean? Watch the video above for a demo. After Effects ninjas rejoice and spend $25. There’s a demo to try and some good comments worth reading before you buy.

If you ever have to add a QR code to your videos then this little $65 or so plug-in for DaVinci Resolve, Adobe Premiere Pro or After Effects might be for you. I know very little about QR codes other than how to read them with a phone shortcut but they sure can be handy on occasion. 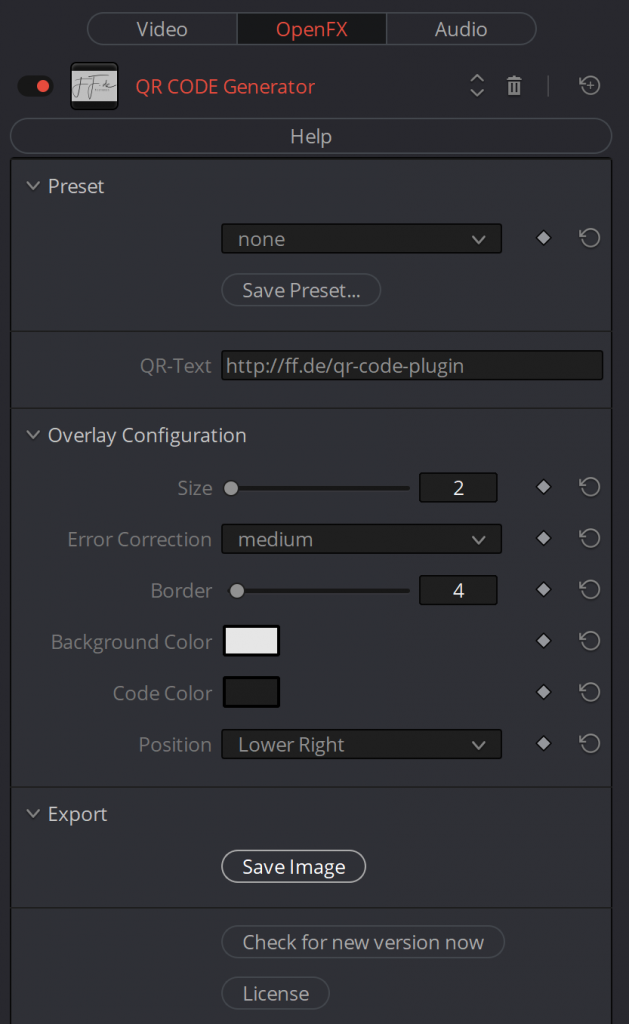 This little tool comes from FF Pictures which has a lot of other potentially useful tools on their website, many HDR related. You can browse for quite a while.

Now … when I go to that QR code above it takes me to a 404. But it does seem to work other than that.

Do you ever want to duplicate an entire folder structure on the Mac? Just the folders only and not the contents? Of course, you do. This little Apple Script looks like it could do just that. And it comes to you via YouTube, download link and all.

Does it make you nervous to download and install a script from a silent YouTube video with the comments disabled? It does me so I haven’t done it yet. The creator does have some other handy looking Mac tools though.  This link came from a Facebook discussion group.

In case you want to see what happens in a TV control room during a buzzer-beater:pic.twitter.com/CXUF6iMQ1O

Just a reminder that Pixar in a Box exists and it’s a GREAT tool for any beginner/intermediate artists interested in animation careers:https://t.co/Ll5Vj5NXnz

Why English is so hard to learn… pic.twitter.com/KY8ZZyS1B5

A new website devoted to the art of editing has just been launched.

EDITED BY is a survey of one hundred and thirty-nine editors who invented, developed, fine-tuned and revolutionized the art of film editing.https://t.co/kkteussEYA