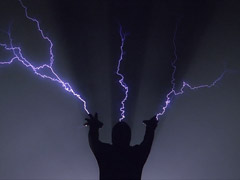 We’re having the hardwood floors in the office refinished. They brought in a huge electric sander that didn’t even have a plug; they wired it straight into the circuit breaker panel. Needless to say, every time they turned it on, the lights dimmed.

This brings up the subject of battery backup power for your computer workstations, commonly known as a UPS (Uninterruptible Power Supply). In short, you should have one on each computer, keeping it and your drives alive when the power blips. You can’t work all day off of them (unless you have a truly huge one), but they’ll keep you up long enough to hit “save” – rather than suffer through a data loss.

We used to have UPSs in the 450 to 650 VA (volt-amp) range. They were fine for our Mac G3s and G4s. Things weren’t so rosy when we started getting multi-processor G5s a few years back: One power blip, and everyone was dead. We’ve had to move up to supplies with at least a 950 VA rating. Higher ratings mean longer running times, plus more future-proofing for when you buy an even more powerful (and power-hungry) computer in the future.

These beasts are a lot less expensive than they used to be, especially if you buy refurbished models. We get ours from UPS For Less, where used units are dirt cheap – roughly $100 for a 1000 VA unit (normally $500+) is a common price. Replacement batteries (which you will need every few years) can be had from a number of places; just Google them.

Here’s a dark secret about most UPS devices: The power they output is not as “clean” as the outlet on the wall; they fake the sine wave of the alternating current. This isn’t a problem with computers, but can cause noise in sensitive audio devices. If this is an issue for you, look for supplies that say they have a “true” rather than “simulated” sine wave output.