Missteps and musings on the path to a lighter camera support. 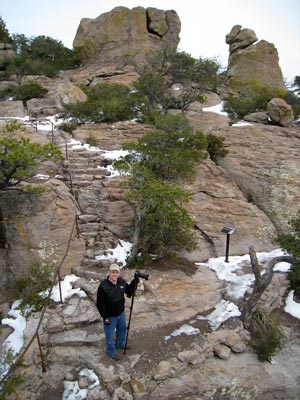 I take most of my photos while hiking. My most common subjects are either close-ups of rocks and plants, which requires razor-sharp focus, or long and wide shots of landscapes with a preference for a very deep focal plane. Both of these benefit from being as stable as possible while shooting – and unfortunately, I'm not a very good statue.

Although virtually all of my lenses have image stabilization built in, I've been looking for a lightweight, highly functional monopod/tripod and head combination that's easier to take with me than our studio sticks (Manfrotto 3221WN tripod with 490RC4 ball head, weighing in at 8.5 pounds). This article is a loose wrap-up of my first halting steps in that direction, in hopes that my missteps may help you avoid similar pitfalls.

Although I know better gear pays off in the long run, for some reason it always takes me a few steps to get there. Thus, in my first attempt at a lighter support rig, I focused just a touch too much on the bottom lines of weight and cost – when I should have been focusing more on functionality.

I started with a Manfrotto 679B 3-section monopod

(pictured above) and a 234RC Quick Release Swivel Tilt Head

– total cost well under $100; total weight around 2 pounds; 5 and 4.5 star customer ratings respectively (both links go to Amazon, so you can check out the product details and customer reviews yourself). Both are nice pieces of gear – especially for the price – but both ultimately fell short of the mark for what I needed.

I choose a 3-section monopod over a 4-section as I though it would save me some weight in clamps and fittings. However, at 27″ fully retracted, it's a tad too long to comfortably unlatch the feet and extend it in a hurry – plus its length occasionally threatened bodily harm to passing hikers. Later this year I'll break down, admit my mistake, and try a 4-section monopod like a heavier but shorter Manfrotto 680B instead. 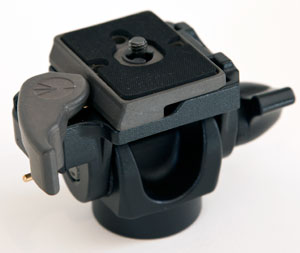 The Manfrotto 234RC is a nice, light little head – I particularly liked the ease of use of its quick-release mounting plate – but it only swivels on one axis. This is fine if your subject is always straight ahead of you and you only need to rotate between portrait and landscape orientations, but I found my desired framings were rarely that straightforward. This required all sorts of strange leanings of the monopod to get the angle I needed; often I would just retract a section and lift the monopod off the ground, using the remaining sections for extra leverage to manually stabilize the camera (which works better than you might think, by the way). As a result, it was the first item to be replaced.

After admitting that I really needed a ball head, I searched Amazon and settled on a Vanguard SBH-100 Small Magnesium Alloy Ball Head

to try next. Part of the reason is that I normally go with Bogen-Manfrotto by default (and Manfrotto was generously loaning me some new gear to try out in the future), so I thought it only fair I look on the other side of the fence to see if the grass was any greener. And at under $75 street, it wasn't a big investment should I be wrong. 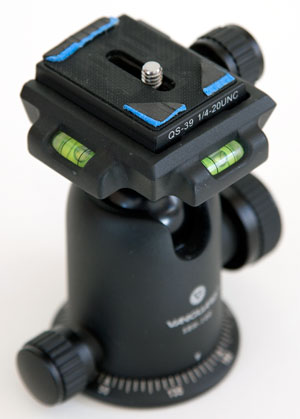 The SBH-100 packs a lot of features into a small head and two-digit price, including two plates (great for quick camera swaps), two bubble levels, and nice-feeling tension screws for the ball as well as Y-axis rotation. It's still fairly light (15 ounces with plate, compared to 9 for the 234RC). That said, I ran into some issues with it.

The biggest one is the rubber used on the mounting plate. Although the head is rated at 22 pound capacity, the rubber was too hard to adequately grip a Canon 5D mkII with stock 24-105mm lens weighing 3.5 pounds. No matter how hard I tweaked the mounting screw, it still came loose during a relatively unchallenging hike, leading me to unmount it halfway through. The solution was to add a few pieces of adhesive foam to the corners (seen at right) and crank down the screw: Now it stays firm, even with my heavier 100-400mm lens.

Another problem has to do with the size. On the one hand, the plate is too large for my “disposable” camera, a Panasonic FZ35 I bring when the 5D is too heavy or conspicuous: When attached, the battery+card door on bottom of the FZ35 won't open. (To be fair, it wouldn't open with the 234RC's plate either.) On the other hand, it's so small that it's hard to see both bubble levels underneath my 5D.

My other gripe has to do with the “quick” release: You need to unscrew a third tension knob, press a button, and then finally slide the plate out of the head. It doesn't seem like much, but it's a bit of a pain when you have a fleeting shot you're trying to capture, and don't have the time (nor can risk the noise) to first extend and latch your stick(s). All that said, it works great the rest of the time at its intended purpose: as a portable ball head. So obviously, I'm a bit ambivalent about this piece.

Bring in the Big(ger) Guns 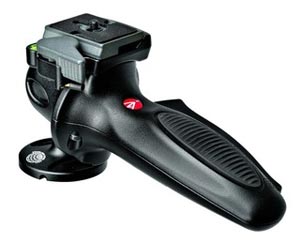 As alluded to earlier, Manfrotto has been so kind as to loan me their 055CXPRO4 carbon fibre and magnesium 4-section tripod plus a 327RC2 light duty handle-grip ball head (pictured right). This combination weights 5 pounds (the tripod in particular feels much lighter than it looks), putting it between my normal studio sticks and the cheap+light hiking arrangement I was trying out above. I have some photo excursions planned for later this year; I'll let you know how they work out. (Manfrotto also sent a 540HD/546BK MIDI Twin System (MS) for shooting video with my 5D; a report on that will be forthcoming later this year as well.)

In the meantime, if you have any suggestions or your own stories to tell about going light when you hit the trails, please feel free to share!