While many see higher resolutions as the sign of better image quality, the truth is that better pixels instead of more pixels may be the way to go. A free e-book entitled The Truth and Hype on 4K, 8K, UHD and HDR explains why. 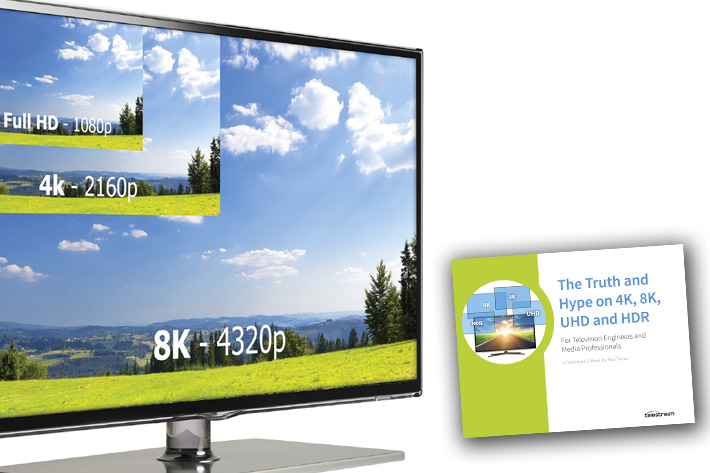 Beyond 4K most viewers will never appreciate the detail on their TV screens, simply because while image resolutions on screen are unlimited, the human vision is not. So why do we keep running after a moving target like “more resolution”?

This insane quest has one culprit: marketing. Many TV manufacturers have been proclaiming that this will be the year in which higher resolution screens will become the norm. This is similar to what was said about higher frame rate sets a couple of years ago – even though at that time, the only video that could be watched at higher frame rates came from video gaming consoles.

The revelation above is one of many that readers can find in a new eBook, completely free, available from Telestream. The 13 page eBook, entitled The Truth and Hype on 4K, 8K, UHD and HDR, written by Paul Turner, Telestream’s VP of Product Management, is an educational and informative guide to many of the latest developments in broadcast technology.

Written in accessible English, the eBook by Paul Turner seeks to answer many of today’s technology-related questions that executives might think but dare not ask.This eBook wil give you concise answers to actual questions like “4K vs. UHD – If they are the same?”, “If 4K is good, and 8K is better, is 16K best?” or “What’s truth and what’s hype regarding HDR?”, and surprise you by suggesting that a HDR Full HD image may be better than a SDR 4K.

Turner draws on his many decades experience, initially as a BBC engineer, and then senior manager within broadcast technology manufacturers in the USA and UK, to unravel the mysteries of image resolution and dynamic range. Using his inveterate Scouse wit, Turner lifts the lid on many myths and legends of modern technology. He explains how UHD and 4K are not the same thing: whilst on-screen image resolutions are potentially unlimited, human vision is not and this startling revelation needs to be taken into account when discussing the costs and benefits of higher TV resolutions. Something many seem to forget, when claiming for 8K and beyond. 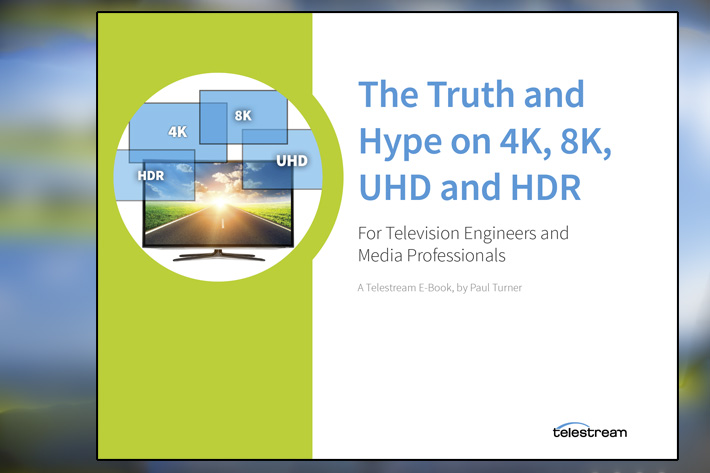 As Paul Turner writes in his eBook, “The higher the resolution on a TV screen, the closer you need to be in order to see all the detail. Beyond 4K, it would be hard for most viewers in homes to appreciate the detail in an 8K image”. He further explains that you need to be ½ of the 4K maximum distance in order to see all of the detail in the 8K.  According to Turner, “the maximum distance for 4k image viewing is 3 screen heights, or somewhere between 5 and 6 feet away from a typical large screen. That means you have to be sitting just 2.5 FEET away from the screen to resolve all of the detail in an 8K image (again, this is assuming a screen size of somewhere around 60”). That’s just not practical! To be seated anywhere close to typical viewing setups in most homes, the screen would have to be over 10 feet in size – again, simply not practical in most homes.”

So, if the numbers are correct, beyond 4K it would be almost impossible for most home viewers to appreciate all the detail in an 8K image. One has to ask, then, why so many people get excited by the suggestion that NHK’s intends to broadcast the 2020 Olympics in 8K. What for?

Paul Turner is a strong proponent of High Dynamic Range (HDR) – he explains how the wider brightness and color range of HDR offers ways to improve picture quality independent of resolution.  In his eBook he writes “You only have to see the images produced by a properly sourced HDR display to understand the impact this technology is going to have on TV viewing. In fact, a well set up 1080p HDR image will blow away an SDR 4K image in almost every respect. The next step is to standardize on the delivery format and EOTF/PQ (the HDR equivalent of Gamma) so manufacturers know what to design to.”

The problem, as of yet, is the lack of two things: figuring how a legacy SDR set should display a HDR signal and the definition of a single standard for delivery of HDR material. The CEA (Consumer Electronics Association) recently announced the industry definition for HDR compatible displays themselves, but Paul Turner believes that HDR is unlikely to achieve widespread adoption until these standardization issues are resolved.

“So many companies inadvertently inundate us with TLAs (three-letter acronyms) – in this e-book I try to unravel much of this impenetrable technical language,” explains Paul Turner. “You don’t get baffled and you don’t get waffle. Just solid, plain-spoken explanations of the technologies that will play central roles in our industry next year and long into the future – what could be a better read after dinner!”